IT services, banking and automobiles are the key sectors for investors to bet their money in FY23

When it comes to the stock markets, just like cricket, Bollywood, or even politics, everyone has an opinion. But the market opinions that matter the most belong to people actually managing the money. The Moneycontrol Market Sentiment survey aims to gauge the mood of the market and get a sense of its direction by polling money managers.

The ongoing conflict in Eastern Europe, rising energy prices and the hawkish policy stance adopted by US Federal Reserve officials about aggressive interest rate hikes may not hamper the earnings potential of Nifty50 companies to a large extent in FY23. However, if the conflict lasts longer and fuel prices stay elevated beyond $100/barrel, some moderation in earnings might be possible. This is as per the findings of this edition of the Moneycontrol survey of domestic fund managers.

Out of seven fund managers polled, four see some moderation creeping into corporate earnings growth for FY23, while two are not decided whether there will be any impact or not. However, Tata AMC does not see any impact on earnings at all. Tata AMC and Mirae Asset Management are the most optimistic fund houses with each estimating Nifty50 companies to grow 15-20 percent in the next financial year. The rest of the fund managers have slightly moderate expectations of 10-15 percent earnings growth. 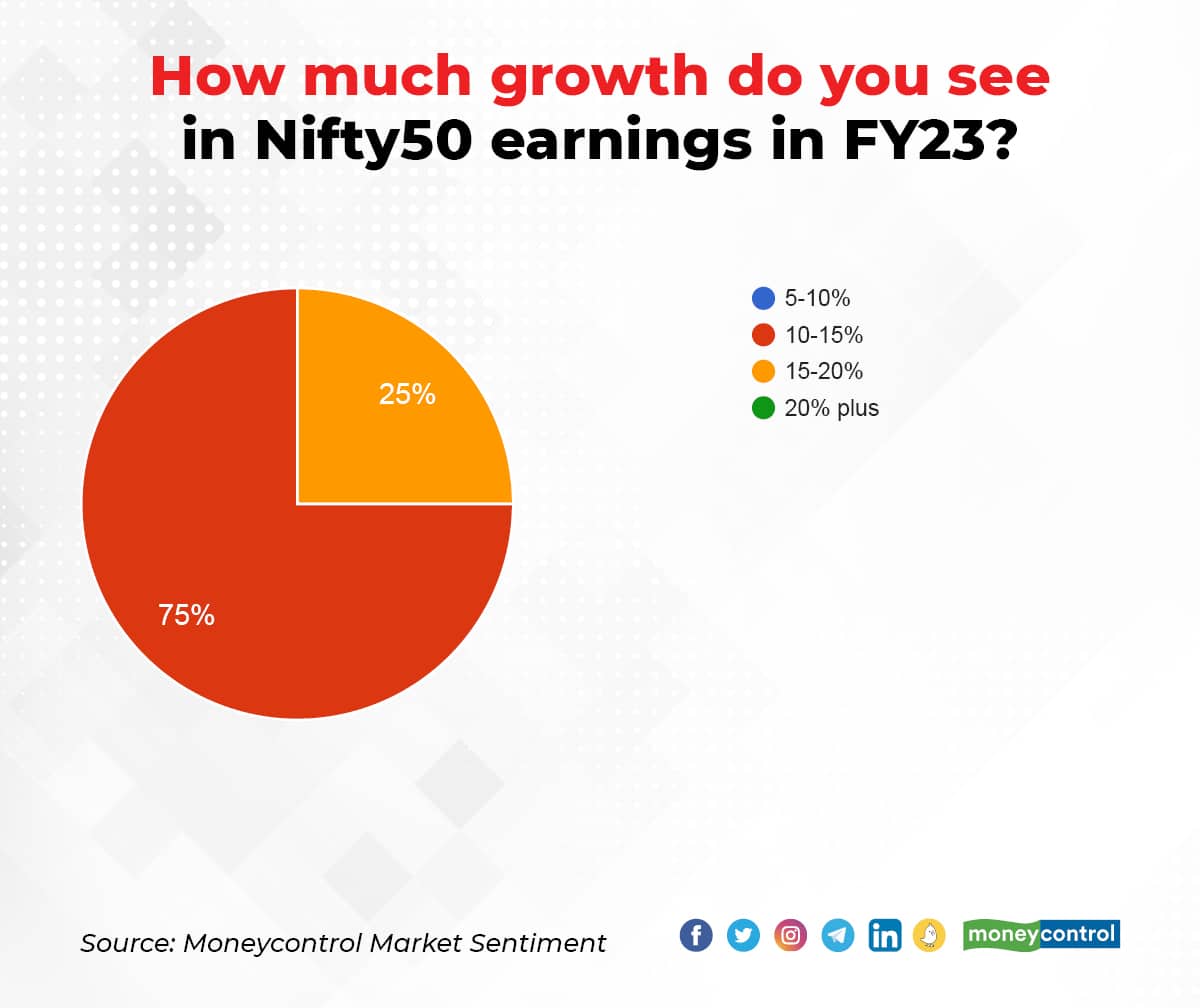 Fund managers polled for this edition of the survey cumulatively have close to Rs 3.90 lakh crore worth of assets under management (AUM).

The Russia-Ukraine war has resulted in a significant surge in global commodity and food prices, amid which many global economies face the risk of stagflation. There is a strong likelihood that stagflation may creep in and has been highlighted by major global investment banks and experts. Stagflation is a situation that arises with persistent high inflation combined with high unemployment and stagnant demand in an economy.

Kaushik Basu, the former chief economist at World Bank and a former chief economic advisor to the Indian government, had said in an interviews a couple of months ago that apart from global economies like the US and Europe, the Indian economy is also staring at stagflation, which according to him is much more painful and requires very carefully curated policy interventions.

He pointed out that 15 years ago, inflation was even higher at close to 10 per cent, but at that time India's real growth was close to 9 percent, which meant that even with inflation, the average household per capita income was rising by 7-8 per cent.

He believes that the current situation is much grimmer as the near-6 percent inflation is accompanied by a fall in real per capita income over the last two years.

Most fund managers who took part in the survey also view global stagflation as a bigger concern for equity investors. Only two fund managers differed, and do not believe that stagflation will have any impact in the Indian context. In view of the prevailing global scenario and a spike in inflation, the US Fed has begun hiking interest rate hikes with a 25-basis point (bps) increase at this month’s Federal Open Market Committee (FOMC) meet.

There are indications that the Fed will up rates at each of its FOMC meetings this year, raising the interest rates to 1.75 percent by the end of the year. However, the fund managers polled are of the opinion that the Fed may not be in a position to do so in the wake of global developments and the majority of them expect only three to four hikes this year against six to seven hikes expected earlier. Rising energy prices have increased the fuel bill for India since it meets 80 percent of its crude requirement through imports. This has resulted in the weakening of the rupee against major global currencies but the managers were divided when asked about the likelihood of a further depreciation in the Indian currency. While three felt that the rupee would stabilise around current levels, two believed the rupee might see a further 2-5 percent fall. Two were not sure about the direction the rupee might take. An interesting point brought out in the survey was that even in the wake of the ongoing Russia-Ukraine conflict, the fund managers have not raised their cash levels and are deployed at the same levels as they were before the start of the crisis when they were carrying 3-4 percent of their total AUM as cash. All the managers suggest that investors should start investing in a staggered manner and with the Nifty in a correction phase, they should use every dip as a buying opportunity with expected returns of 10-15 percent in 2022. Banks, IT and auto are the most recommended sectors for the next one year while they advised investors to avoid the FMCG, consumer staples and consumer discretionary sectors. 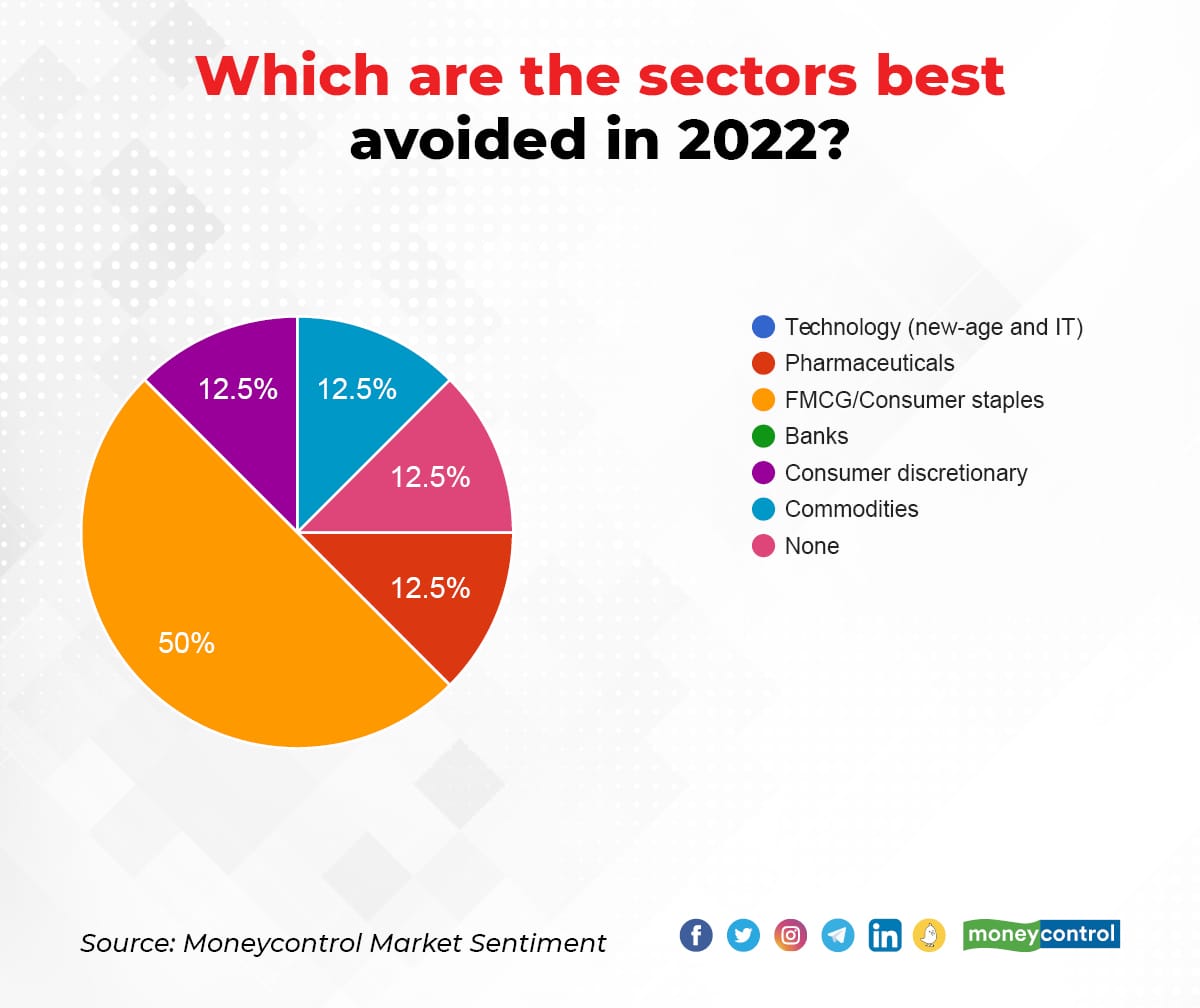