FPI inflows: When they returned after nine months, which sectors did they head to?

Going by the sector allocation, FPIs are treading with caution. Sriram Velayudhan, VP - Alternative Research at IIFL, helps us decode their investment action.

“There is a consensus building that inflation has peaked and so it is a good time to start taking bets on emerging markets,” said Sriram Velayudhan, Vice President and Head of Alternative Research vertical, IIFL, explaining the reversal in trend. Indian markets have also been rallying and Velayudhan is keeping an eye out for the 17,900 level, at which point he believes the market’s rally can be read as an uptrend and not just a bear rally.

That said, the FPIs’ sectoral allocation–largely in FMCG and telecom–shows that they are still treading cautiously. Also read: Is this a bear market rally or a new uptrend?

“In the first stage, FPIs seem to be taking refuge in relatively defensive sectors such as FMCG and telecom. Both these sectors are not volatile like metals. FPIs have also made smaller allocations to cyclical plays such as capex and power, which is likely to pick up later,” said Velayudhan, who has co-authored the report. FPI flows to telecom has seen a sharp rise after a deep fall last month. Allocation (%) shows a slight fall because it is also a function of market movement. That is, it is also influenced by any correction in the underlying stock price. 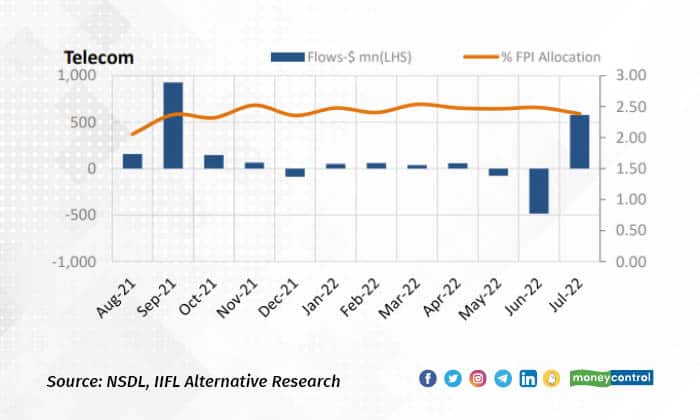 “These are global plays, so they will be driven by global factors like recession and demand in China picking up,” he said. “The sentiment towards the oil and gas sector is also led by the windfall taxes the government had introduced,” he added. The government announced windfall taxes on July 1 on fuel exports and domestic sales of crude oil and said that they would be reviewed on a fortnightly basis. Since then, the taxes have been revised twice. In the latest revision, on August 2, the windfall tax on domestically produced crude was raised to Rs 17,750/tonne from Rs 17,000/tonne, while the tax on export of diesel was halved to Rs 5/litre and the tax on export of ATF was removed.

FPIs will be closely watching the Federal Open Market Committee (FOMC) minutes and any reversal in flows will happen if the Fed takes a more hawkish stand, according to Velayudhan.

“They (FPIs) will dissect the FOMC minutes and check if the commentary has turned hawkish. They will be checking for more qualitative signals. If the commentary turns hawkish, then the FPI flows could reverse (to outflows) again,” he said.
Asha Menon
Tags: #capex #fast moving consumer goods (FMCG) #FPI flows #IIFL #Telecom
first published: Aug 5, 2022 04:45 pm