Most experts believe that the economy, as well as earnings, will pick up in the next financial year

Benchmark indices rallied more than 11 percent while the market gained momentum especially after the cut in corporate tax rate, one of several measures announced by the government in August-September.

The current consolidation after the recent run-up has indicated that the market is waiting for more triggers to move further. Even the current earnings season ended in the September quarter was slightly better than expected. Upgrades especially in Nifty50 were higher than downgrades.

Most experts believe that the economy, as well as earnings, will pick up in the next financial year while the market is already more confident now.

Motilal Oswal said, while the aggregate earnings have been in line with estimates, the commentary is turning incrementally positive, especially on the Consumption front.

"The reduction in corporate tax has largely resulted in better-than-expected profit delivery and also restricted the pace of earnings downgrades. This, combined with various government announcements to revive the troubled sectors, has helped revive market sentiment," it added.

Centrum Broking believes the September quarter of FY2020 may be the bottom.

"Since our study reveals that it takes on an average 2-3 quarters for an economy to normalize once government intervention starts, we expect growth to rebound to normalized levels in Q1FY21-Q2FY21," said Centrum Broking.

"We advocate that though the worst seems to be behind us, this is going to be a slow ride towards path of normalization. Given the current government has a political mandate and has acknowledged the slowdown, it will continuously intervene to bring the economy back on track, as evident from the recent announcement of lowering corporate tax rates," it added.

Experts consistently advising investors to pick quality stocks which will get maximum benefits of revival after several government measures.

Here is the list of 10 largecap ideas which could return 12-33 percent:

We assign target multiple on the core banking business at 1.5x FY21E ABV on the back of structural strengthening in asset quality, improving margins, funding franchise, and healthy coverage ratios, all of which point toward a strengthening balance sheet.

Aided by stable subsidiary performance, we retain SBI as BUY and maintain SOTP-based target at Rs 417. Risks to the call include execution on loan growth and higher-than-expected provisions. 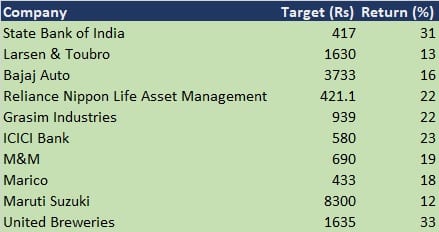 L&T's outperformance continues to be driven by its diverse segmental and geographic presence, including its international footprint. We see strong prospects in transportation, affordable housing, airports and refining among other segments

Key risks: Slowdown in order inflows, pull back in execution due to further rise in working capital levels and renewed margin pressures.

We expect the volume CAGR of around 5 percent over FY19-21. We believe EBITDA margin for the company has bottomed out in the Q1FY20 and is likely to stabilize at the current level. We expect Bajaj Auto to report 16 percent and 16.1 percent EBITDA margin in FY20E and FY21E respectively.

We initiate BUY on Bajaj Auto as (1) the company has launched new products in the mid-segment to strengthen its position after regaining market share in the entry segment, (2) margins are bottoming out at around 15-16 percent and (3) robust return ratios with RoEs of around 20 percent and healthy free cash flows. Initiate with a target price of Rs 3,733.

RNAM is quoting at a cheap valuation compared with HDFC AMC with substantial discount based on FY19 trailing P/E. Although we do not see this gap closing completely, we expect the gap to somewhat narrow. The takeover by Nippon Life should instil confidence among institutional investors in RNAM with the new parents' brand equity likely to help RNAM garner higher share of future inflows from domestic corporates and also offshore flows.

At the same time, the company would retain its management team which has delivered superior performance in the past. RNAM has delivered an average of around 22 percent RoE in the past five years with a dividend payout ratio of more than 80 percent. We value at 40.8x FY21E and get a BUY rating with target of Rs 421.1.

We believe that concerns related to Grasim's investments in Vodafone India are factored in the stock price, reflected in its underperformance
compared with the Nifty in the last one year. The holding company discount for its holdings in subsidiary companies has increased to a historical

In the standalone business, margins have come under pressure recently due to decline in viscose staple fibre (VSF) prices though there could be some benefits due of lower pulp prices. Capacity expansions in both VSF and chemical segments would help profitability in the long run. We have a Buy rating with a SoTP-based target of Rs 939.

Bottoming out of NPA recognition cycle, driven by lower slippages and accelerating resolutions. Changing gears on growth, backed by continued re-retailization and an uncompromising focus on profitability.

It is available at reasonable valuations and set to re-rate due to healthy liability franchisee. There is deceleration in legacy asset quality issues while it is improving return ratios.

Tractor sales are improving because of better customer sentiment on good monsoon and expectations of a bumper Rabi crop. Market share gains in UVs and 3Ws are being supported by new products (XUV3OO UV, Treo 3W).

It has strong presence in the health and wellness space with market leadership in hair oils, refined premium edible oils, and male grooming.

There is improvement in volumes from a faster pace of innovations along with margin tailwinds to drive strong over 20 percent earnings CAGR. Valuations at 39x FY21E EPS are still attractive relative to its peers.

The recovery in sales cycle should be sooner in PVs than in 2Ws and CVs as PVs are less affected by the BS6 transition. MSIL should continue in the pole position in the Indian PV market, driven by its focus on new launches and network expansion.

The network has increased to around 3,000 touch points and the expansion continues toward the medium-term target of Rs 3,500.

A dominant and the most-efficient player in the domestic beer category, it has a strong portfolio backed by Heineken, which makes it the best player in an under-penetrated India beer growth story.

Strong execution and new launches are driving market share gains and double-digit volume growth, which are likely to sustain due to low competition and a favorable demand outlook.

Valuations at 42x FY21E EPS are attractive, given better growth prospects versus FMCG, EPS CAGR of 18 percent over FY20-22E, and an improvement in ROCE to 30 percent by FY22E versus 22 percent in FY18.

Disclaimer: The views and investment tips expressed by investment expert on Moneycontrol.com are his own and not that of the website or its management. Moneycontrol.com advises users to check with certified experts before taking any investment decisions.
Sunil Shankar Matkar
TAGS: #Market Edge #Nifty #Sensex #Stocks Views
first published: Nov 6, 2019 10:02 am