If the Nifty falls to 14300-14350 without meaningful bounce, then it would be a buying opportunity for short-term/medium-term traders/investors, suggest experts.

A week that was dominated by bears saw benchmark indices closing below crucial support levels. The S&P BSE Sensex closed below its crucial support placed at 50,000 while the Nifty50 also ended below 14,600 levels while. However, the broader market outperformed.

As many as 78 stocks in the BSE Smallcap index rose 10-70 percent in the week ended February 26. These include Jaiprakash Associates, Jet Airways, Aban Offshore, Majesco, MMTC, and Hindustan Copper. 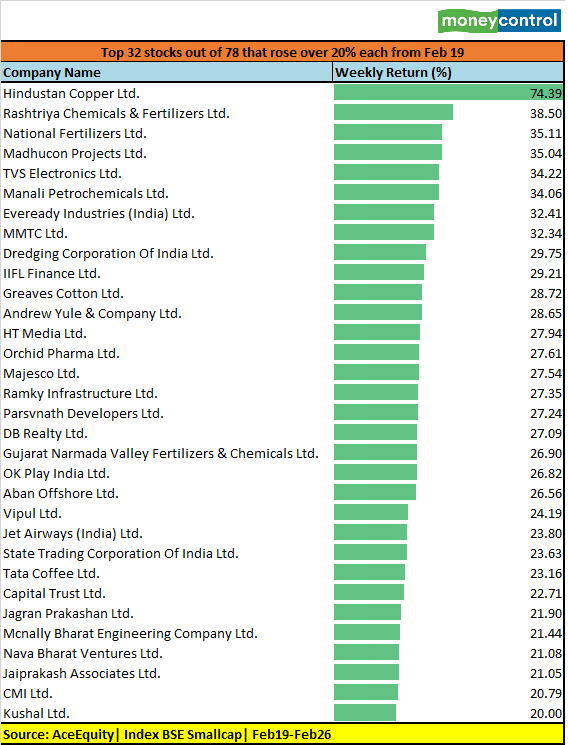 Weak global cues as well as a rise in the crude oil price triggered profit-taking at higher levels. Domestic institutional investors (DIIs) were the big sellers in the Indian market during the week.
Close

Sectorally, the action was seen in metals, realty and power indices. Sell-off was visible in IT, auto, banks, finance, and telecom indices as they dropped more than 2 percent each in the week ended February 26.

The rise in bond yields was the big trigger that led to the sell-off in equities not just in India but across the globe. Additionally, geopolitical tension between US-Iran spooked market sentiments.

India’s benchmark 10-year bond yield rose to 6.24​ percent​, its highest since May 13. It ended trading at 6.23​ percent, up 5 basis points on Friday​, said a Reuters report. ​​​One basis point is one-hundredth of a percentage.​ ​A rise in the US Bond yields would also imply​ interest rates in India are likely to go up​.

With a rise in bond yields, a big impact was seen on the banking stocks, suggest experts.

“Bigger impact of rising bond yields is visible in the banking sector as it will lead to mark-to-market losses on the treasury side in futures. From the recent peak, the Nifty50 has lost 5 percent whereas the midcap and smallcap space has seen lesser fall,” Rusmik Oza, Executive Vice President, Head of Fundamental Research at Kotak Securities told Moneycontrol.

The crucial support is placed at 14,447 where a rebound could be seen.

The market will react to positive GDP data for the December quarter on Monday which will also be the beginning of the last month of the current fiscal year. Additionally, auto sales numbers and manufacturing PMI & services PMI would also be the key microdata numbers to watch out for.

“Going ahead, the rising bond yields will continue to remain a key concern for equity markets worldwide. Although the recent statements by US Fed have been comforting,” Ajit Mishra, VP - Research, Religare Broking Ltd told Moneycontrol.

“On the domestic front, key data like auto sales numbers and manufacturing PMI & services PMI would also be on the radar. Indications are in the favour of further decline in the index and Nifty has next support at 14,400 and 14,200 zone. We thus advise using rebound to create short positions and prefer index majors over others,” he said.

The Nifty50 fell more than 3 percent for the week ended February 26 and closed below 14,600-14,550 levels. The index may see some more knee-jerk reaction on Monday following a weak GDP outlook.

The Q3 GDP growth of 0.4 percent is positive but short of most analyst estimates which were in the range of 1.4-2 percent. The GVA growth of 1 percent was slightly ahead of estimates.

“The informal sector of India, which accounts for a large portion of the GVA, still does not seem to have come out of pain but the recent government measures may play a role in alleviating some of their problems,” Dhiraj Relli, MD & CEO, HDFC Securities told Moneycontrol.

“The downward revision of FY21 GDP in the second advance estimates to 8 percent is also a bit disappointing. The equity markets may be a tad disappointed with these data points but the mood at this point is anyway sombre,” he said.

The Nifty50 which closed below its crucial support at 14,550 levels for the week ended February 26 made a bearish candle for the second consecutive week but on a monthly basis, the index formed a bullish candle.

On the daily chart, the Nifty/Sensex hit a low and closed below the lowest level of the previous week. A sharp jump in the 10-year bond yields (US) has turned the sentiment negative. It touched a high of 1.55 during the week, despite a positive comment from the US Fed chief.

Experts are of the view that for the next few weeks, the market trend would depend on the long-term bond yield trend, which should be on the watch list. Banking stocks will be in focus in the coming week as well. The Nifty Bank suffered its biggest loss in the past six months.

“The market has established a series of ‘lower top and lower bottom’ that would be negative for the medium-term trend of the market,” Shrikant Chouhan, Executive Vice President, Equity Technical Research at Kotak Securities told Moneycontrol.