Tax receipts arising from a levy on payments made to digital advertising platforms such as Google and Facebook from Indian entities jumped 59 percent in the year-ended March, said a tax official privy to the development.

The tax department collected Rs 939 crore in the year to March 31, up from Rs 590 crore a year earlier, the official said on condition of anonymity.

The surge in tax collections suggests that Indian entities paid digital platforms such as Facebook and Google at least Rs 15,650 crore to place advertisements. That compares with the Rs 9,800 crore they spent in the previous year.

The advertiser needs to deduct the levy at source and deposit it with the Indian government on behalf of the offshore digital corporation only if the advertiser has spent more than Rs 1 lakh on advertising on overseas platforms in the previous year. Therefore, the actual spending by Indian entities may be higher than what the tax collection numbers indicate.

The equalisation levy was introduced from June 2016 as a tax deducted at source on payments to offshore digital firms such as mobile phone apps, social media platforms and digital content streaming services with a customer base in India. Taxing their profits efficiently is not easy for the department as either they may not be incorporated in India or may not be recognising their entire revenue in the arm incorporated in India. Currently, the equalisation levy is six percent of the amount paid. 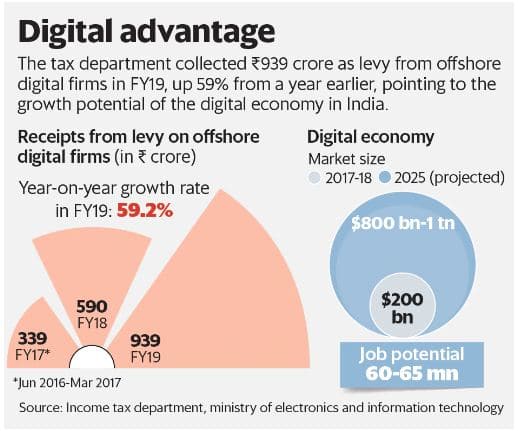 Explosive growth in internet usage and wide availability of smartphones too have contributed to the growth of the digital economy, offering growth possibilities for both domestic and overseas businesses. A report by the Ministry of Electronics And Information Technology and McKinsey and Co in February said India can create up to $1 trillion of economic value from the digital economy in 2025, up from about $200 billion at present.

“There is a huge potential for further growth in digital economy as well as tax revenue from this sector, only a small part of which -- online advertisements -- is taxed under the equalization levy at present. Growth in digital economy tax proceeds could be similar to the growth we had seen in the past in service tax proceeds,” said Girish Vanvari, founder of advisory firm Transaction Square. The government can expand the scope of the levy to other services too.

Encouraged by the growth trend, the government is accelerating a programme to put in place a new framework for taxation of offshore digital companies based on their customer base in India. The move announced in the Union Budget 2018-19 is to tax businesses with “significant economic presence” in India in terms of customer base or revenue even if they have little physical presence. The move is aimed at making the tax law in sync with the new service delivery models that technology has enabled, breaking the link between income generation and physical presence that tax laws rely upon. “The government has received public comments and work is progressing,” said the official.
Mint
TAGS: #Budget 2018-19 #Budget 2019 #Business #Facebook #Google
first published: Sep 9, 2019 09:17 am