The increase is attributed mainly to US court rulings that rescinded two unfavourable memos of 2010 and 2018, which had resulted in increased rejection rates between October 2019 and March 2020.

For India’s famed IT industry, it well could be goodbye Donald Trump, welcome President Joe Biden. Approval rates for fresh H-1B petitions skyrocketed for IT services in the July to September 2020 quarter, a dramatic shift from the sharp decline that the companies have been facing under the Trump administration, according to a report.

This increase in part is due to the US court ruling that rescinded the two memos that had resulted in increased rejection rates in June 2020.

The report by the US immigration think tank National Foundation for American Policy, revealed that denial rates for the fourth quarter ending September is less than 4 percent for IT companies, compared to denial rates as high as 58 percent these companies witnessed in the first three quarters. The United States Citizenship and Immigration and Services (USCIS) follow October to September for its fiscal.

Clamp down of H-1B visas

Indians and Indian IT firms are one of the biggest beneficiaries of the H-1B visa. Under the Trump administration, the denial rate for these petitions increased drastically due to clamp down of the visas.

This includes issuance of a memo in 2018 that mandated employers to provide detailed contracts and itineraries for H-1B employees working at third-party sites. The USCIS also used the memo introduced in 2010 that defined employer-employee relationships to reject petitions.

For instance, the fresh H-1B denial rate for Infosys was the highest at 58 percent between October to March 2020 quarter compared to 2 percent for the same period in FY15.

Infosys was followed by Cognizant, whose denial rate increased from 8 percent in FY15 to 52 percent in FY20. Other IT companies that had a significant number of their petitions denied include Wipro at 39 percent, TCS at 15 percent and Tech Mahindra at 32 percent.

In FY2015, their visa denial rate was between 1 percent and 7 percent. HCL Tech’s share increased to 37 percent from 2 percent. Now with the two memos rescinded, the approval rates have gone up.

Except for Cognizant, whose denial rate stood at 4 percent, for other IT firms like Infosys, TCS, Wipro and HCL Tech, denial rates were 1 percent. For Tech Mahindra, it is even lower at 0.4 percent. 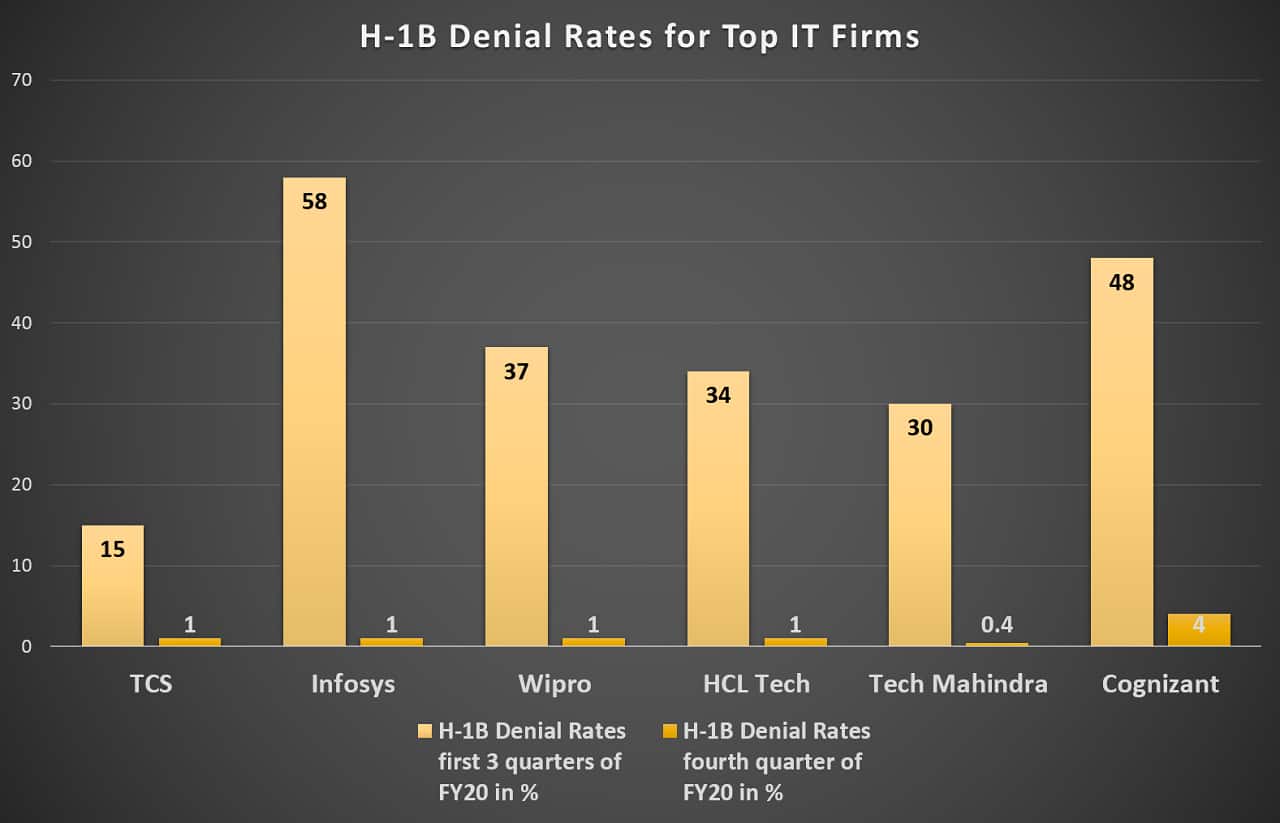 The Biden Administration is favourable to two H-1B rules that would make it hard for IT firms. This includes wage-based selection of H-1B visa petitions and increase in wages for the visa holders.

These rules, which were announced a week before Joe Biden was sworn in as the 46th President, are now on hold for review for additional 60 days.

If implemented, these rules might impact IT firms. However, immigration experts have pointed out that the numbers are unlikely to be as high as the last four years under the Trump administration.