India’s GDP growth contracted 24.4 percent during the first quarter last year. In absolute terms, the economic recovery has still not reached pre-pandemic levels, going by the RBI’s projections. The GDP data will be released on August 31.

India’s economy is expected to show growth in double digits for the first quarter of fiscal year 2021-22 (April-June), largely because of the low base from the same quarter last year, when a nationwide lockdown was imposed due to the Covid-19 pandemic. In fact, it could be a record high for quarterly gross domestic product (GDP) growth.

Nevertheless, the economic bounce-bank is expected to be tempered by the reduction in consumption brought about by the deadly second wave of the pandemic, which began to hit hard in April and May this year.

Also Read | What to look for in the Q1 GDP numbers

The National Statistical Office will release the Q1 GDP data on the evening of August 31.

The Reserve Bank of India has projected April-June or Q1 GDP growth of 21.4 percent, compared to a contraction of 24.4 percent during the same period last year. This means that in absolute terms, the economic recovery will still not reach pre-pandemic levels going by the central bank’s own projections.

That is still one of the most optimistic forecasts. As per a poll of 41 economists by news agency Reuters, India’s GDP rose 20 percent in April-June 2021. The 24.4 percent contraction for the same period last year was the steepest economic decline in Independent India’s history. “India’s second Covid-19 wave acted as a stumbling block to the robust recovery that was underway. Still, the economic damage appears to be less than previously expected. With the second outbreak brought under control, a rapid recovery appears underway,” said Rahul Bajoria, Chief India Economist at Barclays.

“We forecast India’s economy expanded 21.2 percent in April-June as a low base and a much smaller loss of activity due to the second Covid wave push growth to an all-time high for a single quarter, Bajoria said.

Though there was pressure on economic activity and consumption due to the second wave earlier this year, what has helped is that central and state governments have learnt to deal with it through local lockdowns and containment zones, without affecting inter-State trade and activity, something that officials, including Chief Economic Advisor Krishnamurthy Subramanian, have spoken about.

“In our view, the Q1 data will show a clash of two contrasting themes. Although sequential momentum slowed due to the Covid outbreak, the robust performance of India’s tradables sector and a much smaller-than-expected decline in services activity should support much faster GDP growth than we previously expected,” Bajoria said.

While the base effect from Q1 of last year continues to remain strong, the slow growth in manufacturing continued during the April-June period this year, brought on as a result of reduced consumer demand as the second wave of Covid-19 hit, said India Ratings’ Chief Economist Devendra Pant. India Ratings forecasts GDP growth of 15.3 percent for Q1 this year.

“Growth remains below the trend value. However, it is expected to pick up in the ensuing quarters even if the value comes down. This is because a clearer picture of growth will emerge as the base effect wears off,” Pant said. 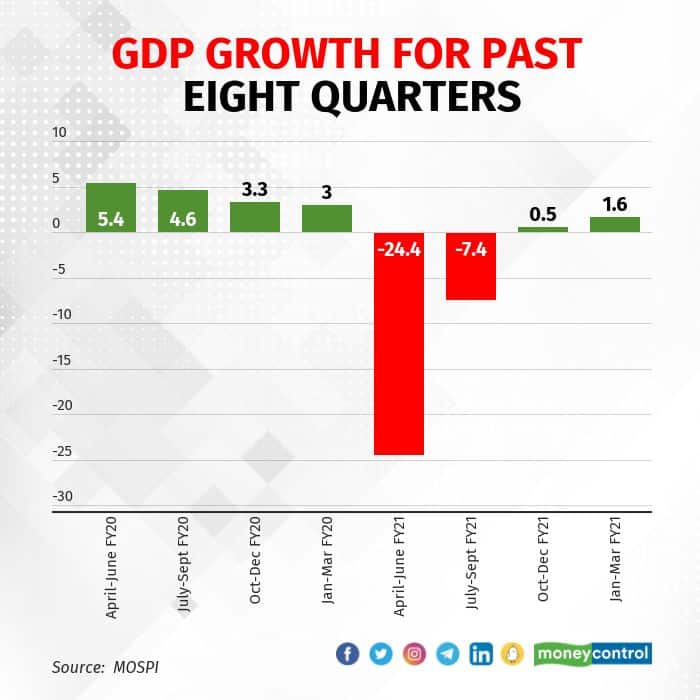 Low base may be deceptive

A record capital expenditure outlay on high multiplier infrastructure projects is the Centre’s chosen path to create jobs and increase consumption spending in a post-Covid economy, coupled with loan guarantee schemes. This is opposed to the minimum income support path, which many economists have recommended, and which the government has ruled out for now.

“Regardless, the muted base of last year’s nationwide lockdown has aided in concealing the impact of the second wave of Covid-19,” Nayar said. Icra sees Q1 real GDP at 20 percent and real gross value added at 17 percent.

“The double-digit expansion expected in Q1 is deceptively high. We forecast GVA and the GDP to have shrunk by around 9 percent each in Q1, when compared to the pre-Covid level of Q1 2019-20, highlighting the tangible distress being experienced by economic agents in the less formal and contact-intensive sectors,” Nayar said.

“What is important is the possibility of a wide divergence between GVA and GDP because of strong tax collections. Our growth projections are lower than those of the RBI. If the corporate results announced so far are looked at, a substantial recovery is visible in corporate GVA in Q1 FY22. However, this is lower than growth in Q4 FY21,” Ghosh said.