172@29@17@144!~!172@29@0@53!~!|news|business|economy|policy-point-the-challenge-of-rising-agri-commodity-prices-and-a-deficient-monsoon-4093751.html!~!news|moneycontrol|com!~!|controller|infinite_scroll_article.php!~!is_mobile=false
LIVE: Watch now - How the Covid-19 pandemic is redefining digital payments
you are here: HomeNewsBusinessEconomy

The government must create a balance between keeping the consumer prices under check and ensuring remunerative prices to all farmers.

Just a few days into the formation of Modi government 2.0, it faces two critical challenges — the possibility of deficient monsoon and spike in prices of agricultural commodities, as seen recently. Deficient rain in the upcoming monsoon months is likely to worsen the existing situation, leaving lesser head-room for the government to resolve the crisis.

Rains are critical for the economy. A little less than half of India’s gross cropped area of 198 million hectares (2014-15) gets assured irrigation and the remainder depends on rains. The monsoon is the most important rain-season as 75 percent of annual rains are normally received in between June and September. Both pre- and post-monsoon months bring 11 percent of annual rains each. The lowest rains are received in the winter months of January and February (Figure).

Actual rains are measured against a normal level of rain called long period average (LPA) that is estimated based on the actual level of rains received during 50 years between 1950 and 2000.

Monsoon rains have been below its LPA in all the last five years (2014-2018). Rains even around monsoon months have been lower than the LPA, particularly since January 2017.

As per IMD’s Long Range forecast there is only 41 percent chance that monsoon rains will be normal (i.e. within +/- 4percent LPA) in 2019. However, there is a 47 percent chance of monsoon rains being lower. With the likelihood of below normal rains even in 2019, the year is likely to become the sixth year in running when national rains fall below its LPA. This is an unparalleled event in Indian rain history.

Amidst the concerns this raises, it also points to a pertinent question.

In recent times of climate variability, when rainfall patterns are shifting, the number of rainy days is falling, and periods of dry spells are growing, is the normal level of rain, which is estimated based on actual rains received between 1950 and 2000, still a correct and relevant measure?

Nevertheless, what is important to note is that rains have been lower in the past five years and this cumulative deficit has led to a water-crisis. If the 2019 rains are also below normal, the situation is only likely to get graver. The western states of Gujarat, Maharashtra, southern states of Andhra Pradesh, Tamil Nadu are amongst the worst hit. As per Central Water Commission (CWC)’s bulletin dated 6 June 2019, the water level in reservoirs in Gujarat, Maharashtra, Andhra Pradesh, Telangana, Tamil Nadu, Kerala and Karnataka is below the 10-year average. In fact, reservoirs important for providing irrigation and drinking water are completely dry in most of these states.

While monsoon rains irrigate kharif crops (like paddy), residual soil moisture and post-monsoon rains (in addition to irrigation) support rabi crops (mainly wheat and gram). With the likelihood of a relatively drier 2019 monsoon, acreage under both kharif and rabi is expected to be adversely impacted which would hit production.

With the government holding large cereal stocks, a crisis in cereals at least can be averted. However, the real challenge will be in horticultural, livestock, pulses and oilseeds where prices of some have already started soaring. 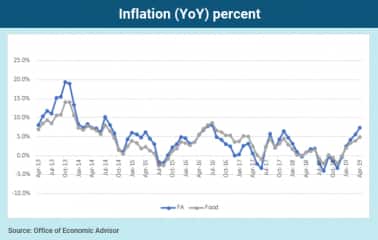 This trend appears to be reversing since the start of 2019.

As of April 2019, yearly inflation shows that prices of food grains have gone up by 9.3 percent, fruits and vegetables by 15.3 percent, fibers by 13.5 percent, oilseeds by 6.8 percent and animal feed by 5.5 percent. The sharpest increase is visible in vegetables like ginger whose prices are up by about 107 percent. In the case of tomato, the increase is more than 86 percent, brinjal about 50 percent and okra about 52 percent. A similar situation holds in case of poultry chicken (up by 21.8 percent) cotton (up by 21.5 percent), groundnut (up by 18.2 percent), gram (up by 13.5 percent) among others.

There are several factors why this price rise is here to stay:

(i) Production Impact: Deficient rainfall in key pulse and horticulture growing states like Maharashtra, Andhra, Gujarat in the last few years has compounded their water problem, and is likely to hit acreage and production in the coming seasons.

(ii) Rural Demand Boost: Rural consumption is likely to get a boost from the unconditional payments received under various direct income transfer (DIT) schemes such as PM-Kisan. As on May 2019, approximately 3.11 crore farmer families received the first installment and 2.67 crore received the second installment. In its first cabinet meeting, the Modi government 2.0 expanded PM Kisan coverage from only small and marginal farmers (12.6 crore) earlier to all farmers (14.6 crore). Money in the hands of farmers will boost rural consumption and trigger demand multiplier across the country. If supply fails to respond, more money chasing few goods will push prices further up.

(iii) Monetary Easing: With easing in repo rates announced by RBI, borrowing and thus consumption is likely to gain momentum.

But are rising prices a cause of worry?

The answer is yes for consumers and no for farmers. Indian farmers suffer as much in a drought year (from falling yields and production) as in a good rain year (when prices crash because of a bumper crop).

Indian policy makers have historically been more receptive to consumer lobbies than to farmers. Every time prices of agri-products begin to rise, governments are quick to respond by imposing archaic laws like Essential Commodities Act (ECA) that restrict stocking and trading of certain crops, impose export restrictions like minimum export price (MEP) and export bans, and sometimes, counter rising prices by dumping cheaper imports. To appease the farmers who suffer in this situation, governments increase MSP, announces farm-loan waivers and undertakes resources to expand crop and area coverage under public procurement. But how many farmers benefit from these efforts? Not more than 20 percent under MSP and not more than 30 percent in case of farm-loan waivers.

The government must rethink the consumer bias in its operations and policy. It must create a balance between keeping consumer prices under check and ensuring remunerative prices to all farmers. It is high time, the government woke up to the deepening farm-crisis and acted on a mission-mode to alleviate it.