Modi 2.0: One year of progressive policies that translated into very little

Narendra Modi, Prime minister of India | Though almost all of India’s Prime Ministers have come from the nearly 80% of the population that is Hindu, only Modi has governed as if no one else matters,” writes Karl Vick, Time editor. (Image: Reuters)

Prime Minister Narendra Modi took over his second term after a thumping majority in May 2019 with the clarion call of turning India into a $5 trillion economy by 2024.

Even before the COVID-19 pandemic had struck, India was already in the middle of a slowdown. According to government data released in February, India's GDP grew 4.7 percent in the October-December quarter of 2019-20. GDP growth in the previous quarter had been revised to 5.1 percent.

Though the government attempted a string of reforms to revive a slowing economy, the impact of those reforms weren't seen having much impact on the ground, even before the lockdown imposed to control the pandemic crippled demand.

"The whole of FY20, everyone was talking of demand shortages. But whatever measures were taken, were on the supply side. Which is why all forecasters were reducing their growth forecast on monthly basis," a private-sector economist said, on the condition of anonymity.

Though supply-side reforms are required for sustained economic growth, but it does little to address the immediate short-run problems. "If you improve the supply side, what you are going to do is improving the fundamentals of the economy, required for sustained growth. But when there is a question of demand, and you reform the supply side, then at that immediate point in time, nothing is achieved. You of course need to look at long term, but one can't lose sight of the short term," the economist said.

The government presented two budgets, one interim and one full, in 2019 which gave the government to take stock of a slowing economy. Various sectors, including automobile, raised concerns over stagnated demand and falling sales. 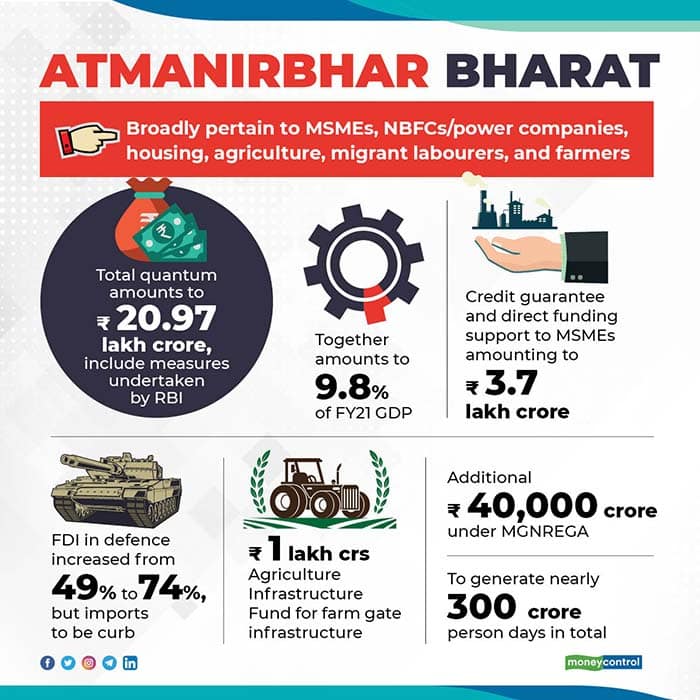 To tackle the issues, the government announced the slashing of basic corporate tax rate to 22 percent from 30 percent while for new manufacturing companies to 15 percent from 25 percent.

The move was aimed to spur the economic growth, which was seeing a declining trend in growth for a number of consecutive quarters.

"The year (FY20) was also a year in which the corporate sector didn't do too well even before COVID. While most companies did switch over to the new tax regime, but the whole idea of it was to make companies invest more. That definitely would not have happened in the last year. So, it's a little too early to judge the efficacy of the rate cut," said Madan Sabnavis, chief economist, CARE Ratings.

On August 30 last year, the finance minister unveiled a mega merger plan for public sector banks (PSBs), amalgamating 10 banks into four. The consolidation brought down the total number of PSBs in the country to 12 from 27 in 2017.

The fourth one was the consolidation of Indian Bank with Allahabad Bank making it the seventh-largest bank.

The move was aimed to make banks stronger and competitive by optimisation of manpower and reducing the costs of running banks by addressing overlap of branches across India.

Finance Minister Nirmala Sitharaman slashed the personal income tax rate for individuals for the fiscal year 2020-21 in her 2020-21 budget.

However, the government made this scheme optional, and to avail which, taxpayers will have to let go of exemptions.

Just as India's fundamentals were starting to look up in February, the world was struck by the outbreak of COVID-19 pandemic. In order to control its spread, the government announced a nationwide lockdown. This crippled demand and affected sectors like hospitality, aviation, among others and put most of India's informal sector out of work. "We need to prepare for tough global competition. When we speak of Atmanirbhar Bharat, we are not looking inwards, it is not isolationist policy, it is making India rely on its strengths, ready to face global challenges," Sitharaman had said.

While most experts and stakeholders had been expecting direct cash transfers to sectors that needed it, the government has focused in making processes and liquidity requirements to be smoother for the country to get back on track.

"The focus of the government has always been on the supply side. So, they have been trying to plug bottlenecks be it in NBFC, auto, SME, real estate. But the approach so far in both regimes have been that the government does not give any money as such, except for maybe the slashing of corporate tax rates. So it's more like saying you follow all the rules but I'll make sure the rules are easier for you," Sabnavis said.

Though prudent, but most of its policies lose the sting because they are dependent on how other constituents react to the policies. "The policies have been progressive, but the reciprocity of it has been weak because the other concerned players are not too comfortable with it. Like banks are not comfortable in lending to everyone, though the government has stepped in where necessary, to improve liquidity concerns of various sectors," Sabnavis said.
Kamalika Ghosh
Tags: #coronavirus #Covid-19 #Economy #Modi 2.0 #Narendra Modi #Nirmala Sitharaman
first published: May 28, 2020 12:18 pm