Contest Alert:2 days left to win Amazon vouchers worth Rs 5000. Take the MCPRO Quiz today to grab yours!
you are here: HomeNewsBusinessEconomy

The back series data released on November 28 has been aligned with a new methodology which changed the base year to 2011-12.

The Indian economy did not grow at a scorching pace during the UPA regime as it was earlier made out to be, a new set of national accounts data released on November 28 showed.

NITI Aayog and the Central Statistics Office (CSO) released the 'back-series' of India's gross domestic product (GDP) data from 2005-06, using a new methodology, that shaved off the previous growth estimates by a few percentage points in several years.

"The new series (2011-12) is far more superior and has made some significant methodological improvements," said Rajiv Kumar, Vice Chairman of government’s policy think-tank NITI Aayog, adding that the government consulted experts such as member of the monetary policy committee Chetan Ghate, former chief statistician TCA Anant, among others.

It was previously estimated that India clocked double digit growth of 10.3 percent in 2010-11. This has now been revised to 8.5 percent, according to the new estimates.

In 2008-09, growth declined to 3.9 percent due to the global financial crisis. However, new estimates show that the growth rate was overestimated and economy actually grew 3.1 percent.

The back series has been aligned with a new methodology that the government launched in 2015, changing the base year to 2011-12.

Earlier, the index of industrial production (IIP) served as the primary metric for gauging manufacturing and trading activity. This limited the calculation to only number of units produced, and did not distinguish between a sedan and an entry-level car.

Organised industrial activity was based on IIP and it used to get updated two years later based on data coming in from the Annual Survey of Industries (ASI), which captures goods' value at the factory gate only for firms registered under the Factories Act.

Now, the corporate affairs ministry's MCA 21 records, a comprehensive compendium of balance sheet data of about 5,00,000 firms, is used.

The base year of the national accounts is the year chosen to enable inter-year comparisons. It is changed periodically to factor in structural changes in the economy and present a more realistic picture of macroeconomic aggregates. The new series changes the base to 2011-12  from 2004-05.

The base year is important in GDP calculation as factors such as purchasing power and enables calculation of inflation-adjusted growth estimates.

Labour income is calculated differently in the new method, where different weights are assigned on whether one was an owner, a hired professional or a helper using a method called "effective labour input".

Similarly, value addition in agriculture, in the new method, is aimed at capturing activity beyond the farms such as livestock data.

The new series shows that value addition in trade was significantly lower than what was being projected in the old series, which used extrapolated data from a survey conducted in 1999.

Similarly, according to the government officials involved in the compiling of the new data, the earlier series did not capture financial services value addition in its entirety. It captured only a few mutual funds (primarily UTI) and estimates for the Non-Government Non-Banking Finance Companies as compiled by RBI, apart from banking and insurance activity.

In the new series, the coverage of financial sector has been expanded by including stock brokers, stock exchanges, asset management companies, mutual funds and pension funds, as well as the regulatory bodies, SEBI, PFRDA and IRDA.

This probably explains the sharp drop in growth rate to 3.1 percent in 2009-10, mirroring a deeper impact of the global financial crisis of 2008 on the Indian economy that previously thought.

In January 2015, the CSO had released new set of national accounts, revising the base year from 2004-05 to 2011-12. In the new series, the GDP at factor cost was replaced with Gross Value Added (GVA) at basic prices was adopted, as per international standard.

"The methodology for preparing the back-series estimates for the years 2004-05 to 2010-11 is largely the same as the methodology followed in the new base (2011-12). In certain cases, owing to the limitations of the availability of data, either splicing method or ratios observed in the estimates in base year 2011-12 have been applied," CSO said in a release. 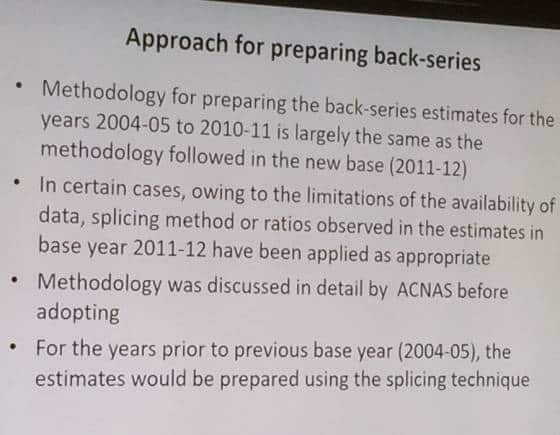 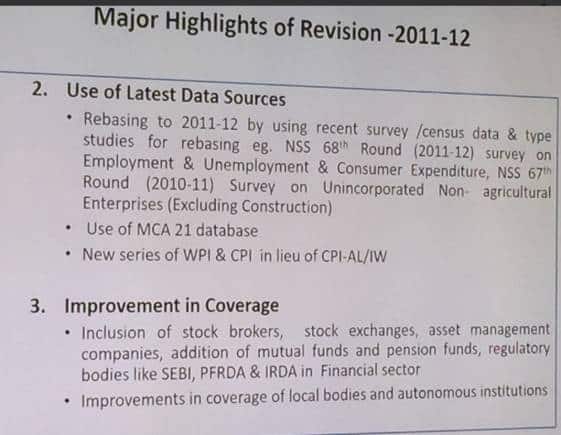 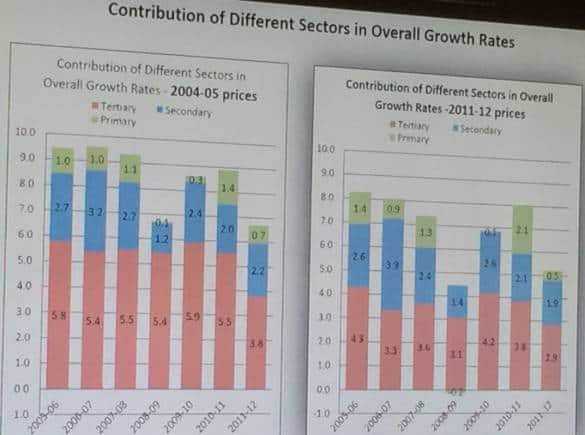 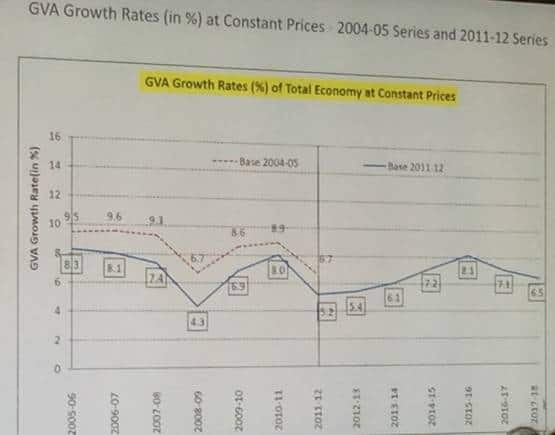