For the second year in a row, Nifty50 companies have only 1 woman CEO

HDFC Life Insurance is the only Nifty50 company that has a woman chief executive. HR experts say societal issues and women dropping out of the workforce in their mid-30s are behind the absence of female leaders.

A Moneycontrol analysis of Nifty50 companies showed that HDFC Life Insurance was the only company that had a woman CEO (Vibha Padalkar) in 2020 as was the case in 2019.

Even if one were to look at the top 50 companies in the Fortune 500 companies list, a report by Catalyst, which is a global gender-equality non-profit firm, showed that there are three women chief executives among the top 50.

Human resource experts said that the reasons for the low numbers in India are a mix of women dropping out of the workforce at the mid-management level to unconscious biases at the workplace.

A study by diversity and inclusion consulting firm Avtar showed that women constitute 33 percent of the workforce at the entry level.

By the time they reach manager level, the number of women drops to 23 percent, and to 16 percent at mid-manager level. At the corporate executive level, they make up only 14 percent.

This data only pertains to the 100 best companies for women in India, which includes the likes of Accenture, Barclays in India, EY, Genpact India, IBM India, Infosys, KPMG, Novartis Healthcare, Target Corporation India and Tech Mahindra. These figures would be lower in other companies and is a direct result of women dropping out of the workplace.

Dropping out would be a result of increased household responsibilities post the maternity break. As per law, women get six months of paid maternity leave.

A recent study by human resources firm TeamLease Services found that the Maternity Benefits Act is yet to deliver the advantages of improving job opportunities for women.

Women likely faced a net job opportunity loss between 0.91 million and 1.36 million over FY20 compared to 1.3 million to 1.8 million jobs lost in FY19, the study said.

Have women always missed out?

Women CEOs are not completely alien to Indian companies. At its peak between 2013 and 2017, the banking sector had many women CEOs: ICICI Bank’s Chanda Kochhar, Axis Bank’s Shikha Sharma and SBI chairperson Arundhati Bhattacharya. Royal Bank of Scotland country chief executive, the late Meera Sanyal, who later joined the Aam Aadmi Party, was another example.

If you look beyond the Nifty50 companies currently, there are close to a dozen leaders. In the IT/ITeS sector, there is Roshni Nadar Malhotra, who is the chairperson of HCL Technologies and Aruna Jayanthi, Capgemini’s Asia Pacific and Latin America Business Unit Managing Director. There are also examples of women struggling to make it to the board in companies. The recent example of Murugappa Group’s Valli Arunachalam being denied a board seat grabbed eyeballs especially since she alleged that the group only mentors the sons for leadership roles.

Ambadi Investments Ltd (AIL), which is the holding company of the Rs 36,893-crore Murugappa Group, voted against giving a board seat to Valli Arunachalam, daughter of former executive chairman MV Murugappan. At the company’s annual general meeting (AGM), held on September 21, over 90 percent of the shareholders voted against a board position for Arunachalam.

She also said that the restructuring exercise at the Murugappa Group was ‘unfortunate’ as it failed to let women become a part of the board.

Delhi-based human resource consultant Prachita Gupta said that when women like Valli, who are part of family-run businesses, are denied board seats, it shows a clear bias.

“How can the board and shareholders deny the right to a board seat only based on the gender of the candidate. Isn’t this a clear bias? If senior board members are supporting this decision then it is a reflection of their own prejudices against women leaders,” she added.

The reason cited was that Shagun, nominee of Madhu Kapur’s family to the Yes Board, lacked the necessary experience to hold that position. The Kapurs contested this and moved the court in 2013. After a long battle, Shagun was appointed as Additional Director (Non-Executive, Non-Independent) on the Yes Bank board in April 2019.

In May/June 2020, Madhu Kapur’s family consented to reclassify their shareholding in the bank as ‘non-promoter shareholders’ and withdrew the suit filed against the bank management in the Bombay High Court.

Why are women missing at the top?

A leaky pipeline of woman leaders could be cited as one of the top reasons why there are very few women CEOs among Nifty50 companies.

Saundarya Rajesh, Founder–President of diversity and inclusion strategy firm Avtar Group, said that there are some sectors such as banking and insurance that have seen a significant number of women leaders at the top.

“The significant talent-drain of women, specifically at peri-leadership levels, results in skewed talent availability for the top spot. When the process of succession planning does not undergo an audit for gender equity, there is a strategic lack of intent in identifying women for the top role,” she added.

But she said that there are reasons for optimism now. According to Avtar & Working Mother’s 100 Best Companies for Women in India study, women’s representation has not only risen, but women’s participation at the leadership level has seen a surge.

In this study, about 16 organisations are led by women. Further, 26 percent of all corporate executives with profit and loss responsibilities in these 100 Best companies were women. Rajesh said that overall availability of gender-balanced talent pools across levels can further fuel this number.

Rituparna Chakraborty, co-founder and Executive Vice President, TeamLease Services, said companies in India cannot have more representation when the pipeline itself is weak.

When the process of succession planning does not undergo an audit for gender equity, there is a strategic lack of intent in identifying women for the top role
- Saundarya Rajesh

“If they (women) drop out, how will there be adequate female candidates available for leadership levels. We are far from the levels that developed markets like US have achieved,” she said.

Internal HR heads of companies also admitted to Moneycontrol on condition of anonymity that there are concerns about women taking breaks due to maternity and not returning to the workforce.

“We start leadership and succession planning when a mid-management employee is in the 32-35 years age bracket. So if women take six months of maternity leave exactly at this time then they lose out on this key mentoring process. I am not saying they are at fault but this is the reality,” said the human resources head of an electrical goods firm.

Echoing a similar view, the senior-vice president HR at a financial services firm said that there have been three cases in his organisation where women groomed to be CXO leaders didn’t come back after maternity leave. This, he said, left a bitter taste and now they only consider women for CXO role training after they have come back from their leave.

Human resource experts are of the view that mentorship by senior women leaders and also male CEOs could help bridge the gap between the demand and supply of qualified women leaders.

“While career slowdowns that happen due to work-life integration demands at the mid-career stage result in fewer women pursuing their leadership aspirations, the lack of mentors and fewer role-models prevent women from chasing their dreams. Top leadership that believes in the power of inclusion and strong mentorship channels can pave the way for more women leaders in the future,” explained Rajesh.

A similar effort that is often ignored is encouragement by family members along with the men also taking responsibility for the child at home. 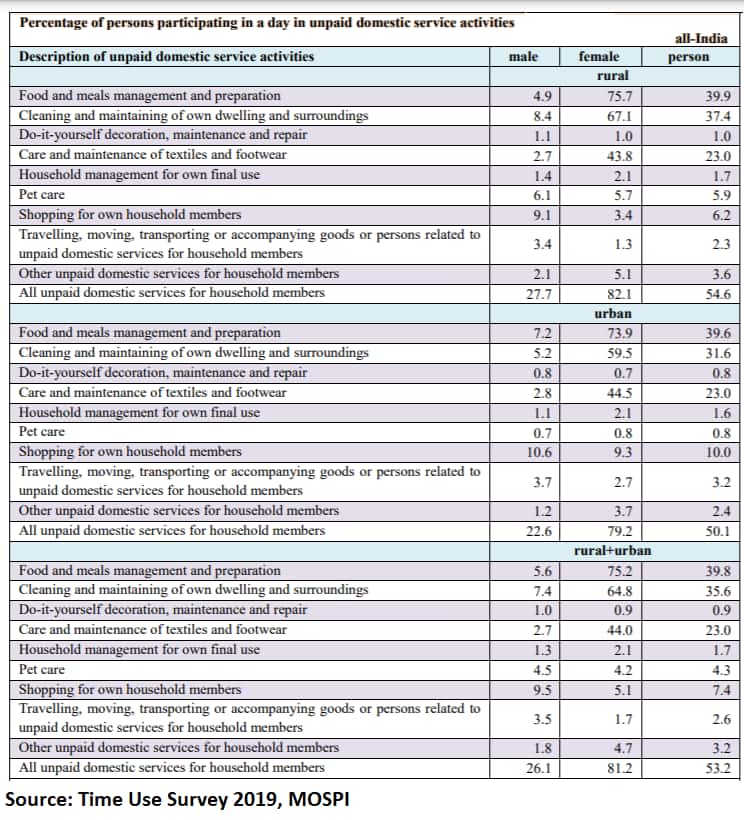 According to a 2019 Time Use Survey by the Ministry of Statistics and Programme Implementation, 81.2 percent of Indian women spent their daily time in unpaid activities at home while only 26.1 percent men spent time on this. Here, only 5.6 percent of men cooked compared to 75.2 percent of the women.

Aditya Narayan Mishra, CEO of CIEL HR Services, said that while the situation in terms of support structure for women talent at home is improving, it isn’t changing at the pace that is required.

This includes encouraging women to work even late nights if required, without hesitation, and celebration of work promotions and achievements by family members.

The Maternity Benefits (Amendment) Act 2017 increased the paid leave for maternity from 12 weeks to 26 weeks. It also called for creche facilities for the benefit of new mothers to be arranged by the workplace when they rejoin the organisation.

However, this change in law has also resulted in an adverse reaction from companies, especially traditional manufacturing, construction and MSME firms, in not hiring women or paying less attention to their L&D needs.

The TeamLease study quoted above said that the increase in cost for retaining women and increased burden on fellow employees are some of the fallouts employers are attributing to the Act.

Time spent on domestic duties, social stigma against women in employment and the regressive attitudes of employers are some of the main reasons cited by women for choosing to stay away from work.

Mishra of CIEL HR Services added that a woman could lose one year of productive work if she has two children (maternity leave of six months each) and added that this is the reason women could lose out on leadership positions. He also added that six months of paid leave is not a cost that every company can bear.

“If the government steps in and says that it is ready to bear the cost of the maternity leave, then more companies will hire women and also encourage them to move up the leadership ladder,” he added.
For women eyeing the corner office, the struggles are far from over.