DATA STORY: Energy consumed by bitcoin miners around the world is more than over 150 countries

Bitcoin is perhaps the most valued currency in the world, virtual or real. The exchange rate as of Friday stood at over USD 8,000 for one BTC. But, not many people know that mining bitcoin also costs a preposterous amount of electricity to the world

As of November 22, the ‘miners’ have consumed 29.51 TWh (1 TWh= 100 crore units) of electricity, according to the Bitcoin Energy Consumption Index by Digiconomist. And, if the consumption keeps growing at the same rate, by the end of the year, it would stand at 38.36 TWh of electricity, placing it at 58th position, just below Hungary, in terms of total electricity consumption. In fact, the total energy consumption is more than that of Ireland which uses 23.79 TWh of electricity and North Korea at 11.24 TWh.

Similarly, mining ether or etherum — the next most valued cryptocurrency, has consumed 10.41 TWh of electricity as on Wednesday. That is almost the equal amount of electricity Paraguay consumes in a year. At the current level, the electric energy which goes towards mining bitcoin would be enough for three crore (30 million) Indians. What is bitcoin mining?

Mining bitcoin is a hardware intensive process which requires the computer or a user to solve a mathematical problem. Once a solution is reached, a transaction is validated and resultantly a new block is created in the blockchain which contains the information related to that transaction. As a reward for validating the transaction, a ‘miner’ earns a new set of bitcoins.

However, by design, not every solution will lead to a block creation. It is more like a lottery, where there will be several hits and misses. Hence, logically, the probability of success increases if the number of attempts is greater. This is what drives miners to try more and which again results in greater consumption of electricity.

The Digiconomist Index to compute the amount of electricity consumed assumes that a miner spends 60 percent of its bitcoin income on electricity. According to the website, "the assumption has been chosen in such a way that it can be considered to be both intuitive and conservative, based on information on actual mining operations."

The growth in consumption and projection

In the last one month, as per the estimate, the consumption has grown by 30 percent which is indicative of surging interest in the currency. Comparatively, in the same time frame, the value of bitcoin has soared over 40 percent.

At present, the consumption is 0.13 percent of the global electricity consumption. Assuming that the countries don’t add any new power generation capacity and the growth in the consumption due to mining remains the same, bitcoin mining would consume as much electricity as India consumes every year (1,126.5 TWh) by January 2019. And, by January 2020 (at a monthly 30 percent growth) it will surpass the total consumption of the world as of now (22,383 TWh). 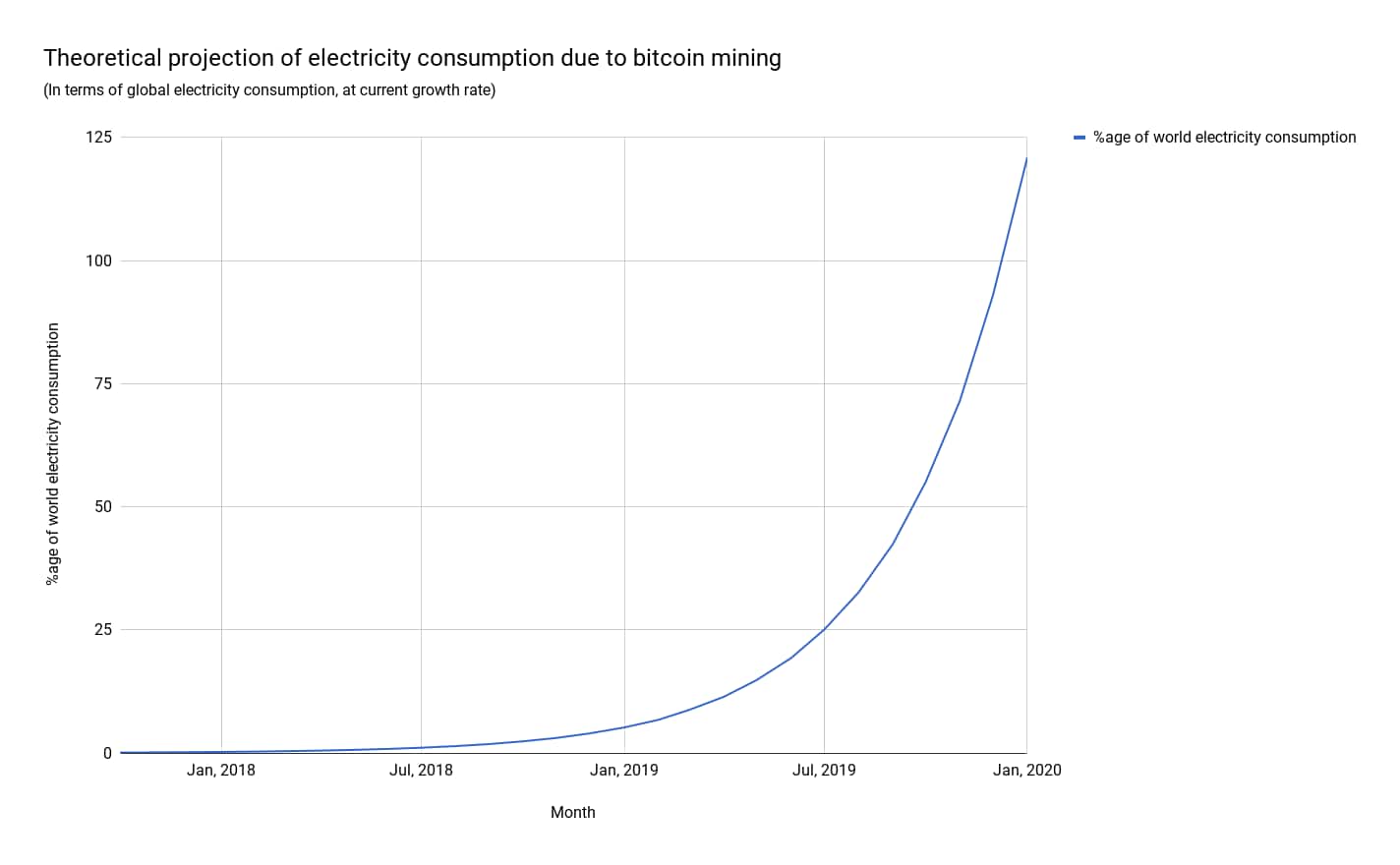 The above stats are just a food for thought. Obviously, the numbers are theoretical and practically the growth most likely won’t sustain that of the current level. Even if the growth remains high, the world is not going to stop adding power generation capacity. Eventually, the supply would grow to match the demand.

According to the Intergovernmental Panel on Climate Change, for every unit of electricity produced in the world, on an average, 500 grams of CO2 is exerted. A back of the envelope calculation shows that total CO2 emission due to bitcoin mining, at present, is 14.75 million tons.

Country that consumes most electricity for bitcoin mining

A study conducted by Cambridge Centre for Alternative Finance (University of Cambridge) and Visa showed that nearly three-quarters of all major mining pools are based in just two countries, China and the US. 58 percent of mining pools are based in China, followed by the US with 16 percent. Interestingly, these two countries emit the largest amount of CO2 gas in the environment.

Though, these mining pool location numbers need to be taken with a pinch of salt as individual miners and organisations can easily switch their location. For example, a miner in India can switch its location to the UK. Thus the computing power would be from India but it would show in the account of the UK.

Nevertheless, the consumption, wherever it emanates from, poses a new challenge in the fight against climate change.
Shubham Raj
Tags: #bitcoin #Business #cryptocurrency #Ether #Etherum
first published: Nov 25, 2017 11:06 am