CNBC-TV18’s Nigel D'souza is in conversation with the Steel Secretary Aruna Sharma on the side-lines of the Centrum Symposium on steel. Steel consumption is going up very well, it is matching to the increase in the production which is a very good sign, she said.

CNBC-TV18’s Nigel D'souza is in conversation with the Steel Secretary Aruna Sharma on the side-lines of the Centrum Symposium on steel.

Steel consumption is going up very well, it is matching to the increase in the production which is a very good sign, she said.

She expects norms to prevent circumvention to be announced soon

Speaking on resolution of non-performing assets (NPAs) mess she said, NPAs are being referred to National Company Law Tribunal (NCLT) and we are expecting steel NPAs to get faster resolution. Steel NPAs will get their formulations very soon, she further said. 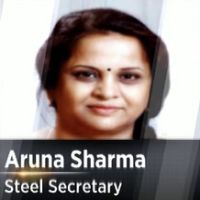 Linking of the iron ore mines is a necessary move, said Sharma.

Q: The last time we spoke, you had told our audience that yes, we are going to see higher steel demand in this fiscal. Now it started off and we are at around 4-4.3 percent. When do we see that number move towards at 6-7 percent and what is the outlook? Do you think that in FY19 it is possible?

A: Surely, because not just 6-7 percent, we would love to see it in double digit. From absolute numbers, if we look at it, the steel consumption is going up very well. It is matching the increase in the production, which is a very good sign. Our exports are as low as just eight million tonnes against the production of 85-90 million tonnes which we have made a jump and we are thinking we will touch 100 million tonnes by end of this financial year by March, 2018.

So with that kind of a scenario it is going up and from 50 kilogram (kg) per capita to 60 kg per capita it took 7 years. But 60-64 it has taken 1.5 years. And that is something that I am wondering what exactly is our denominator. Is it 1.25 or 1.34? If it works to be 1.25, then it is 68 kg per capita which is fantastic jump, which we have done. The policy of procurement for the domestic usage in preference to the domestic producers, its impact will be visible. Therefore, definitely we are quite confident that this graph of domestic consumption is going to be up and up with a good angle of progression as we move.

Q: We will be quite optimistic once we get to the higher single digits, even double digits. But also I wanted to stress on that point. You have done a fantastic job in protecting the industry from imports. We have had MIP, then we have had anti-dumping duty that is in play. Is there anything more we are looking at because the last time I spoke to a lot of steel producers, they said that there is some circumvention that is happening. So are we planning on plugging that?

A: You are absolutely right. We are closely watching the circumvention, especially in the stainless steel sector. What was happening was that in Chapter 72 of Bureau of Indian Standards (BIS), we have put the standards of making the sheets. Now the semi-finished and finished goods comes in Chapter 73. So not getting listed there, the circumvention was happening. So now we are working towards an amendment that if the raw material does require a standard then it should also be ensured in the semi-finished and finished goods.

Similarly we are also planning, through the standard route, for the food packaging tin standards. So, that is going to make a difference. So this kind of a circumvention will be controlled as we are moving ahead with it and it will be plucked. So we are very consciously observing it, because in some places, it is an issue of hygiene, in other places it is also an issue of respecting the law of the land. So both ways we are very conscious about it.

Q: How soon can we hear about this?

A: This should be coming very soon because it is at the penultimate level of notifications, so it should not take long.

Q: The entire industry, they want to know what is happening in terms of the NPA mess. The last time you spoke to us, you were telling us about some fresh capital being pushed into this system and pumping back into the system some kind of money. Is there some kind of a plan in terms of resolving this entire NPA mess that we are seeing currently? And also importantly, you had spoken to us about some foreign direct investment (FDI) in the steel industry. Can we hear something about that in the near future?

A: I will put it this way that NPA is already being referred to NCLT, which is a quasi-judicial proceeding, so it will not be appropriate to comment upon it, but we are expecting that the NCLT, when they will finally get into resolution, steel will be the forerunner into the whole process. And steel NPAs will get their formulations very soon for resolving this all issue as we are going ahead.

Having said that, already expansion plan is in the offing. The private sector is in the expansion mode whether it is JSW or Tata Steel. They are planning to enhance their capacities. Same will apply to those companies also who are in the NCLT. So it may be a little bit on hold today, but in their whole action plan, definitely expansion is there even in those plants because they all have been earnings before interest, taxes, depreciation and amortisation (EBITDA) positive, 20 plus. So plant per se, there is no issue. Plant per se has every possibility of more and more enhancement as we are going ahead. So I do not see much of an issue there.

When you are talking of FDIs, FDIs we are watching because with the preference to the procurement of steel made in India with 15 percent of value addition, definitely we are optimistic that FDI will be encouraged to have their production plans here. Having learned lessons from the past, now land banks are available, what is necessary is linking of the iron ore mines to them for the end users.

And now, with the Supreme Court orders, the Mines and Minerals (Development and Regulation) (MMDR) Act is getting revisited. So we are definitely going to work with the mining ministry to ensure that iron ore availability to the end users is smoothened in a transparent way and how we work out a mechanism so that it comes. With that resolution, we expect the FDIs to come very soon.

Q: Another important point you made at the Centrum conference was that you are looking at gas availability. If that happens, yes, a lot of small steel producers as well, they will come back into production and importantly, the other big one is Essar Steel, that has a debt of close to around Rs 45,000 crore. So, if in case Essar Steel is on the block, can you assure higher gas availability at competitive prices? That could set a lot of interest among buyers.

A: It is a misnomer that it is only the big integrated plants who got stuck because of non-availability of gas. If you look at the manufacture of steel across the globe, high end steel, high quality steel, low carbon footprint steel, it is all gas based. So GAIL has gone ahead by spreading the pipeline across the country. Today, its utility will be maybe 10-15 percent. For its utility to go up, it is very important that across the country, the gas consumption goes up.

So they are all waiting in readiness. The moment petroleum and natural gas ministry is to come up with a formulation, where gas at affordable price is assured -- so there is not fluctuation in the policy once the switch over happens -- there is no looking back. And what we are confident that it will not be just steel industry, many of the industries which are polluting because of other source of energy will like to switch over to gas.
Tags: #Aruna Sharma #Business
first published: Aug 23, 2017 02:18 pm