The government’s claim each time a scam has taken place is that the law will take its own course. There is invariably a lot of sound and fury – signifying nothing

Once is happenstance. Twice is a coincidence. Three times is an enemy action.

The markets are in a tizzy.  Believers in a concept called India are dismayed.  The latest scams surrounding Punjab National Bank (PNB) and ICICI Bank have actually shaken the faith of many who believed that India was beginning to cleanse itself of the rot that had corroded the economy in the past.

The government’s claim each time a scam has taken place is that the law will take its own course.  There is invariably a lot of sound and fury – signifying nothing. 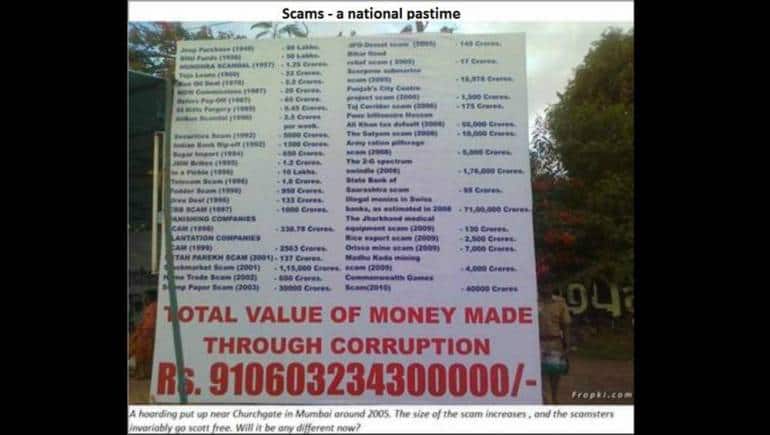 Almost all the culprits go scot-free.  And as a hoarding put up near Churchgate around 2005 clearly showed – India remains a land of scams.  They become bigger with each passing year.  And the law is never allowed to take its course.

When it involves government officers or ministers, permission to investigate is not given by the government.  When it comes to judges, impeachment proceedings are not embarked upon.  In the Harshad Mehta case, impeachment proceedings were embarked upon by the government. But on the appointed day, most politicians stayed away from Parliament. That made the proceedings infructuous. In the case of another chief justice of the apex court, where there were serious charges of amassing assets beyond known sources of income, the enquiries were suddenly silenced.

Consider one more modus operandi that appears to be common to three of the biggest scams in the recent past.

In the Harshad Mehta case, money was illegitimately obtained through the use of fake BRs (Bankers Receipts).  These were receipts given by banks when a treasury bill was deposited with a bank to borrow money against the financial instrument.

What was missing as an online database that could allow banks to know if the instrument had been pledged with another bank, or whether the BR existed at all. Had a centralised database been made available, no fake BR could have found its way to any bank, and no BR could have been presented twice to different banks.

Hindsight is supposed to make one wiser. Yes!

But fast forward to five years ago, and you have the National Spot Exchange (NSEL) scam. Warehouse receipts were issued for grain that wasn’t even there.  All that was needed was a centralised database, which could have let everyone know how much of grain was actually stored in each warehouse.  The database would have told one if a particular quantity of grain had been sold, or pledged, or if the warehouse receipt itself had been mortgaged.  Once again the centralised database for universal access was missing. As James Bond would have said, Maybe twice is coincidence.

Both scams took place in the age of the internet where online access to centralised web-based databases is quite a simple process.  Yet nobody bothered!

Then take the case of the LoUs (letters of understanding).  The Reserve Bank of India (RBI) had made it clear that LoUs could not be used for advancing money.  Guidance ignored. All LoUs were to be backed by a margin of over 100% of the amount mentioned.  Once again, this rule was ignored. But more serious was the fact that the same LoUs were pledged more than once and fake LoUs began doing the rounds just like fake BRs did almost two decades ago.

Now either Indian bureaucrats don’t learn from mistakes, or are trained to look the other way. In any professionally run organisation, when a mistake happens once, it is a learning curve.  A second recurrence is a case for the person being put on the watchlist.  A third repetition calls for dismissal.

The government hasn’t dismissed anyone.  The CBI hasn’t filed charge-sheets against any officer for ignoring this basic rule.  Even linking the SWIFT communication vehicle to the Central Banking System was ignored.  And Infosys, which provided the software, was supposed to have covered all loopholes.  Shouldn’t the system engineer who certifies the soundness of the platform have alerted people to the dangers of the SWIFT not being linked to the CBS?  And why was the RBI silent about the absence of a central database of LoUs or LCs or any other instrument that could have been pledged?

This was the third time a central database was being ignored.  Doesn’t this not warrant classification as “enemy” action?

Whose enemy? Enemy of the people, obviously. Or have various authorities, over the years, slept with the enemy?