Although the digital revolution is fairly recent in India, it has seen exponential growth due to a favourable regulatory environment, deeper smartphone penetration and growing internet access.

Although digital payment is a fairly recent trend in India, it has seen exponential growth due to a favourable regulatory environment, deeper smartphone penetration and growing internet access as per a study by BCG and Google.

After its launch in 2010, Paytm enjoyed the first-mover's advantage and became synonymous with digital payments. The Warren Buffet-backed digital company was named  the market leader in terms of number of transactions and user base with 4 billion transactions in 2017-18 and reported 350 million registered users as of June 5.

A number of fintech companies like Mobikwik, Freecharge and Citrus joined the market to benefit from a larger customer base which began demanding convenience in payments. (Showing Paytm App has the highest downloads) 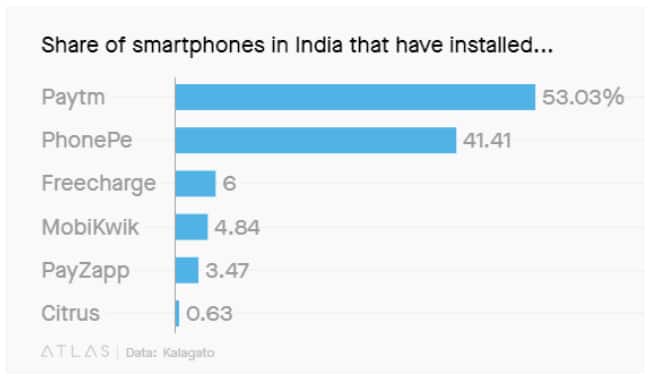 Study by KalaGato which first appeared on Quartz

Walmart's PhonePe, which roughly translates to ‘on the phone’ in Hindi, is gaining momentum to pose as serious competition to the market leader, as per reports by Quartz. In June, PhonePe was home to 290 million transactions with an aggregate value of $85 billion, compared with 71 million transactions at $22 billion a year earlier, according to the company, as per a Bloomberg report.

Paytm and PhonePe both started as payment wallets that integrated various other functions like the united payments interface (UPI), gaming and utility payments.The ‘Paytm Karo’ jingle appeared everywhere leading to high transaction frequency, but a low value per transaction. Therefore, PhonePe has been able beat Paytm in average transaction value, but it consistently needs to grow its market share by increasing the number of mobile app downloads and widening its user-base.

The founder of BharatPe, which offers merchants a single interface for all UPI apps, tweeted-

Google Pay recorded more than 240 million transactions in May, which beat both Flipkart-owned PhonePe, which had around 230 million UPI payments last month, and Paytm having 200 million transactions as per an Economic Times report. While it might be true that GooglePay might have taken over these wallet giants in terms of value and first time in terms of volume last month, it still fights market penetration by a user base established by Paytm.

In terms of the aggregate value of transactions, the money paid through Google Pay was the highest at Rs 55,000 crore followed by PhonePe at around Rs 44,000 crore and Paytm, around Rs 38,200 crore. Due to large amount of cashbacks, GooglePay has grown in transactions, but it lacks a wallet service and stable market share in terms of users as of now. Launched early in 2018, GooglePay maybe the biggest threat to these players.

Flipkart’s board recently authorized PhonePe Pvt Ltd  to become a new entity and explore raising $1 billion from outside investors at a valuation of as much as $10 billion, which might still be an undervaluation, according sources in a Bloomberg report. Also, PhonePe’ volume and value of transactions have roughly quadrupled over the past year making it a close competitor of Paytm. Paytm still has a lead in registered users and monthly active users.

Digital payments in India are projected to reach $1 trillion by 2023, up from about $200 billion currently, said a Credit Suisse Group cited by an Economic Times report . Its majority business is from peer-to-peer (P2P) transactions, and it can see an increase in business-to-business (B2B) over the years, which currently stands between 10-20 percent. Study by KalaGato that first appeared in Quartz

While other digital payment companies maintain a minority share, PhonePe competes with the Paytm's first mover advantage, though it continues to diversify its array of services to remain the leader.