After Apple, Google Play starts rolling out its own app privacy labels

Google Play's data safety section will provide users with more information about how apps collect, share and secure their data.

Google said on April 26 that it is rolling a new 'data safety' section on its app marketplace Google Play that will provide users with more information about how apps collect, share and secure their data.

The move was first announced by Google in May 2021 and was expected to roll out in February 2022, but later got delayed to April 2022.

The company said this section will start appearing on Google Play from tomorrow (April 27). This launch comes after a similar initiative by rival Apple that introduced privacy labels on App Store in December 2020.

Among the information that developers can show in the data safety section includes whether they are collecting data and for what purpose, whether they are sharing data with third parties and the app's security practices like encryption of data in transit and whether users can ask for data to be deleted. 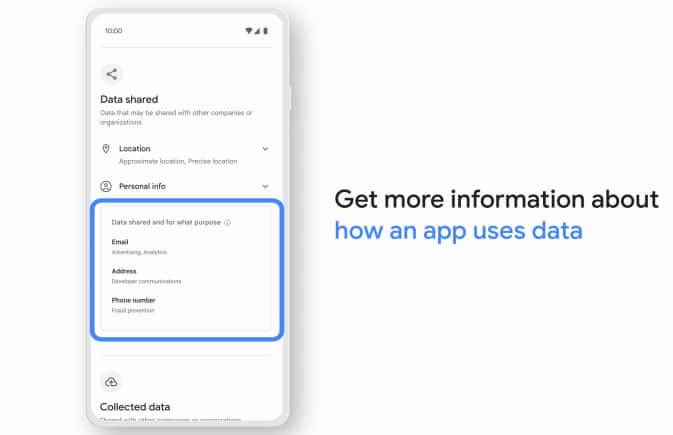 Developers can also show whether they have validated their security practices against a global security standard like MASVS (Mobile Application Security Verification Standard) or committed to following Google Play's Families policy. Users can also view whether this data is crucial for the functioning of the app or it is optional.

"We heard from users and app developers that displaying the data an app collects, without additional context, is not enough. Users want to know for what purpose their data is being collected and whether the developer is sharing user data with third parties. In addition, users want to understand how app developers are securing user data after an app is downloaded," the company said in a blogpost.

Google started allowing developers to fill out this information through a form on its developer portal Play Console in October last year and they have time until July 20, 2022 to declare how they collect and handle user data. This includes data collected and handled through any third-party libraries or software development kits (SDKs) used in their apps.

After submission, Google will review this information and start showing it in the respective app listings on Google Play.

That said, the company notes that app developers will be responsible for ensuring complete and accurate declarations about their apps and any discrepancy between their declaration and the actual app behaviour may lead to appropriate action, including enforcement action such as app removals.

After July 20, the company said it will reject new app submissions or app updates for those with incomplete forms, unaddressed form issues or a missing privacy policy. Non-compliant apps may face additional enforcement actions in the future, it said.

"Giving users more visibility into how apps collect, share and secure their data through the Data safety section is just one way we’re keeping the Android users and ecosystem safe," Google said in the blogpost.