Nadal, Djokovic or Federer? Who is the real GOAT?

The US Open gets under way today (Aug 29, 2022) at New York. With 22 Slams already under his belt, Rafael Nadal will stake claim to be the greatest of all time, if he picks up another title. But there is also Novak Djokovic, who is not far behind, and Roger Federer, who has more titles than the other two.

In 2018, when Roger Federer, the former world’s No. 1 men’s single tennis player from Switzerland won his 20th major title at the Australian Open, he became only the fourth player (men or women) to win 20 major titles (Grand Slam tournament).

Two of his closest rivals, Rafael Nadal from Spain and Novak Djokovic from Serbia, were behind. Nadal ended 2018 with 17 major titles, and Djokovic with 14. Federer was almost crowned the GOAT (Greatest of All Time).

The tide changed. In 2020, as tennis struggled to come back to a normal schedule after the cancellation of many tournaments due to COVID-19, Nadal beat Djokovic convincingly in the finals of a rescheduled French Open. Nadal, thus, lifted his 20th major title, equalling Federer’s tally. Suddenly, Nadal was on the verge of surpassing Federer in the GOAT debate.

Then, in 2021, with three Slams in his bag, including a win over Nadal en route to his second French Open men’s single title, Djokovic, too, won 20 major titles. Suddenly, it was a three-way race to GOAT.

So, who is the real GOAT, after all? How do you even judge one?

This one is the most widely accepted criterion to decide who is the GOAT. Coming to the Australian Open in January, Nadal was unsure of his chances as he was suffering from a chronic foot injury, which was diagnosed as the Muller-Weiss syndrome, a rare and degenerative disease that causes flatfoot. It can lead to your feet being disfigured or bent out of shape.

Meanwhile, after winning three major titles in 2021, Djokovic was the favourite to pick up the Australian Open in January 2022, and race ahead of Nadal and Federer in the Grand Slam tally. With Djokovic out of the US Open 2022, can Nadal win his 23rd major and widen his lead?

Fate had other things in store. Djokovic was deported from Australia after a 15-day fracas with the immigration authorities over his vaccination status. Australia had not opened its doors for unvaccinated in-coming international travellers, who are not citizens, at the time. Australia has since relaxed its entry requirement rules for visotors and doesn’t insist on a vaccination status anymore.

Meanwhile, Nadal won his 21st major title at the Australian Open, racing ahead of the other two, and then his 22nd at Roland Garros, Paris, was firmly at the driver’s seat of this race.

And with Djokovic out of this year’s US Open, can Nadal win his 23rd major and widen his lead?

Cliff Drysdale, ESPN announcer and former ATP professional, says that Nadal’s major tally comes with a small asterisk. A majority of his titles came on clay, his favourite surface, at the French Open, at Roland Garros, Paris. “Rafa (Rafael) is up there at 22. But half of them are on clay. That, to me, is a negative. You cannot therefore judge him to be the greatest of all time,” he tells Moneycontrol, over the phone from Texas, US.

On the big stage: Head to head

Tennis commentator Brad Gilbert, who coached Andre Agassi, the former world’s No. 1 tennis player, says that it’s not just the majors’ tally that counts. He says the head-to-head count -- - the number of times players face off one another at the grand slam tournament finals -- also matter.

“The Grand Slam final match is the ultimate match, because the winner takes the Slam title, the other one doesn’t,” says Gilbert over the phone from California, US.

On this count, Federer, who has currently fallen out of the ATP (Association of Men’s Tennis Professionals) rankings on account of not having played in over a year, falls behind. Not only have Djokovic and Nadal dominated Federer in their face-offs, they have also dominated him on the big occasions. Both Djokovic and Nadal have a winning record against Federer in the Grand Slam finals.

Drysdale admits that while the GOAT conversation is “more a matter of heart than statistics”, he says there is a “huge difference in their (Federer and Nadal) mental capability.” He says that a winning record of one player over the other is a big part of the conversation.

When Nadal, currently ranked No. 3 in the world, has faced Djokovic, the current world No. 6, things have been more even-steven. But Nadal has proved to be the tougher of the two on the bigger occasions.

Of the 18 times they’ve faced each other at the Grand Slam tournaments, Nadal has won 11 times. Of these, they’ve played nine times in the finals. Nadal has won five times.

Nadal’s head-to-head record against Federer and Djokovic is also the reason why Gilbert disagrees with Drysdale’s assessment of lowering Nadal’s haul of 22 major titles, just because a majority of them, 14, came at the French Open.

“Look at how many times Nadal beat Federer and Djokovic at the Roland Garros. He has done repeatedly. That matters because Djokovic and Federer also had a chance to win the French Open,” says Gilbert.

Of the five times that Nadal and Federer have met at the French Open, Nadal won all the encounters.

Of the nine times Nadal and Djokovic met at the French Open, Nadal won 7 times.

The haul of Masters 1000 titles

Outside the four major tournaments, men’s tennis players fight out their supremacy at the next big stage -- the ATP Masters 1000 tennis tournaments. Nine such tournaments are played in a calendar year, and 48-96 of the top players fight it out. The winner gets to earn 1,000 points in the ranking race.  Hence, the name of the series. 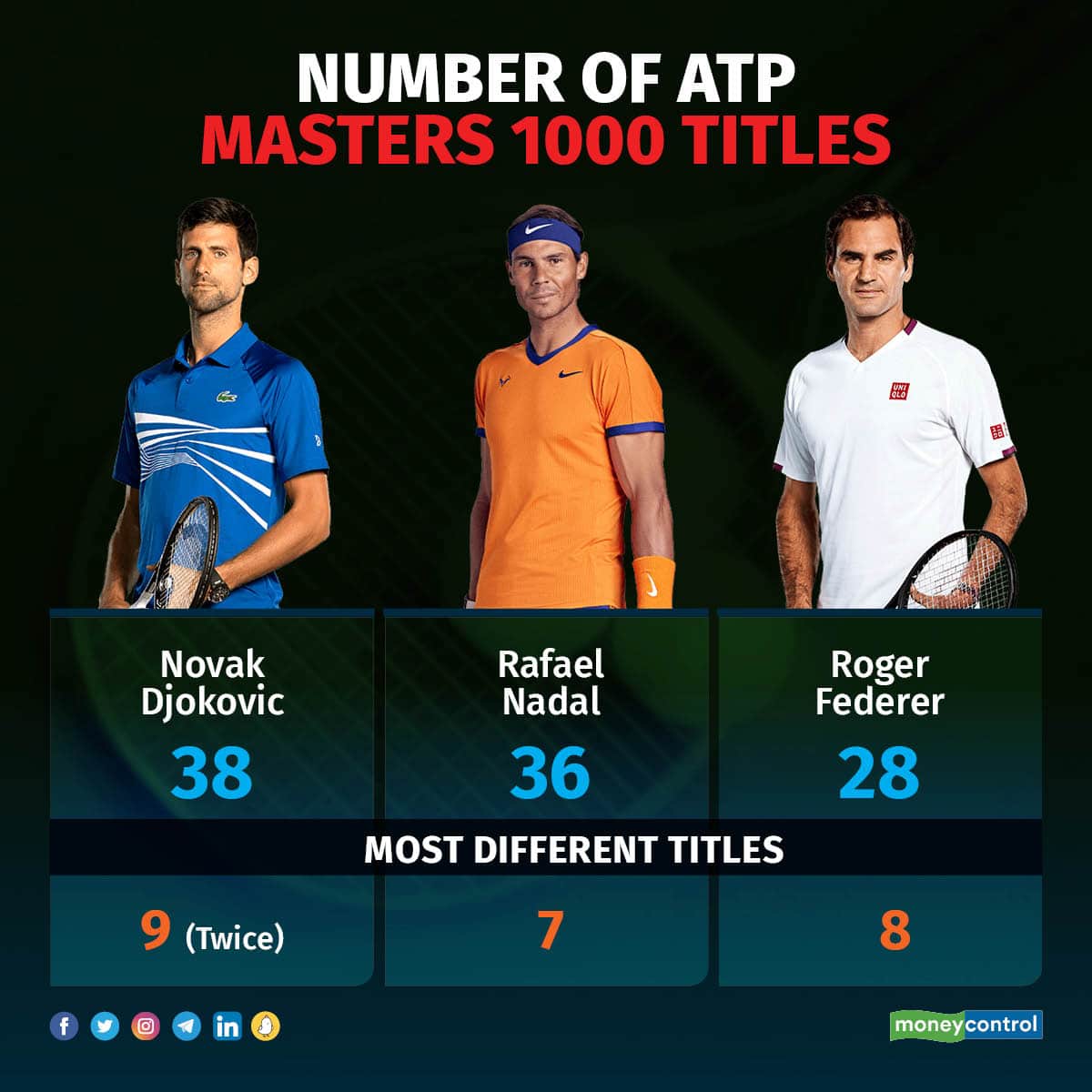 The ATP Masters 1000 tennis tournaments are elite tournaments where top players compete. The winner earns 1,000 points in the ranking race. Hence, the name of the series.

Here, Djokovic has the edge.

Federer comes closest with a haul of 8 titles. Nadal has won 7 of the ATP Masters 1000 titles.

At the top of the world

All three players have been ranked No. 1, at different points in time. All three players, Djokovic, Nadal and Federer, have been ranked No. 1, at different points in time.

Here, Djokovic takes the lead. He has been No. 1 for more number of weeks than any other male tennis player. Federer is a close second with 310 weeks at the top. Nadal has some way to go before he catches up with the two of them.

Retired tennis players Pete Sampras (from US), Ivan Lendl (born in Czechoslovakia and now an American citizen) and Jimmy Connors (US) have been ranked for more number of weeks as No. 1 than Nadal.

On the other hand, Federer has the most number of titles, among the three.

It’s unlikely that Federer’s haul of titles would go up, as he is said to be closer to retirement now, more than ever. But Nadal and Djokovic are still active. So far, Nadal has won 92 titles and Djokovic has won 88.

So, who is the real GOAT? That debate, thankfully, continues.

Many tennis commentators say that the GOAT debate is beyond numbers and statistics. Vijay Amritraj, India's former Davis Cup captain and now a commentator, says that as compelling as the Djokovic-Federer-Nadal storyline is, we mustn’t forget former tennis greats.

Amritraj reminds us that Laver may have won just 10 major titles. He won all the four major titles in a single calendar year -- a feat, in tennis parlance, is referred to as the Grand Slam. Only Steffi Graf, the former No. 1 ranked women’s tennis player, achieved this feat in 1988.

“And he (Laver) did this twice (1962 and 1969). No other men’s tennis player has managed this extremely rare and difficult feat. That puts him in a category by himself,” says Amritraj.

Amritraj says that the best thing about Federer, Nadal and Djokovic is that all three of them have played tennis during the same time and their careers have lasted a long time.

Mary Carillo, the former US player turned TV commentator, too, avoids going strictly by statistics. “I cannot imagine that there will ever be a definitive answer to this question (GOAT). Federer won't add to his Grand Slam title count, but so what? His game was full of majesty and stylishness that no one else has ever shown, and he both defied and defined what all-time greatness could look like. Nadal is in the majors’ lead now, and he has played both Federer and Djokovic in their primes. He is the most dogged of competitors, the ultimate problem solver. Then, Djokovic entered the fray and has shown supremacy over them both...and has conquered every surface. No one is wrong or right, whoever they chose. Their greatness made each other even greater.”

Kayezad E Adajania heads the personal finance bureau at Moneycontrol. He has been covering mutual funds and personal finance for the past two decades, having worked in Mint and Outlook Money magazine. Kayezad was the founding member of Mint’s personal finance team when it was set up in 2009.
Tags: #Novak Djokoivic #Rafael Nadal #Roger Federer #Sports #Tennis
first published: Aug 29, 2022 11:29 am