Upcoming Event:Experts and leaders discuss how modern digital tools are transforming the media industry. Register now
you are here: HomeNewsTrends

AMD could also leverage DXR’s fallback routine to implement raytracing, similar to what Crytek did in a raytracing demo using an AMD Vega GPU.

Nvidia’s domination in the commercial GPU market is still going strong in 2019. According to the Steam Hardware & Software Survey for January 2019, Nvidia GPUs dominate charts with 74-per cent of systems running on the chipmaker’s GPUs as compared to AMD’s 15.34 percent.

Since the survey, Nvidia has released two budget graphics cards, the GTX 1660 and 1660 Ti to reassert their domination. AMD’s budget Navi 10 GPUs which will be built on 7nm architecture are set to debut in the second half of 2019, while the Navi 20 series graphics card aimed at enthusiast gamers may debut in 2020.

AMD’s current flagship GPU, the Radeon VII takes on Nvidia’s RTX 2070 and 2080, offering a price-to-performance ratio that falls right in between the two cards. The upcoming Navi 10 GPUs are set to take on Nvidia’s GTX 1660 Ti and RTX 2060, which still leaves no competition for Nvidia’s RTX 2080 Ti powerhouse. AMD is set to address this in 2020 with their Navi 20 GPU built on 7nm+ architecture. 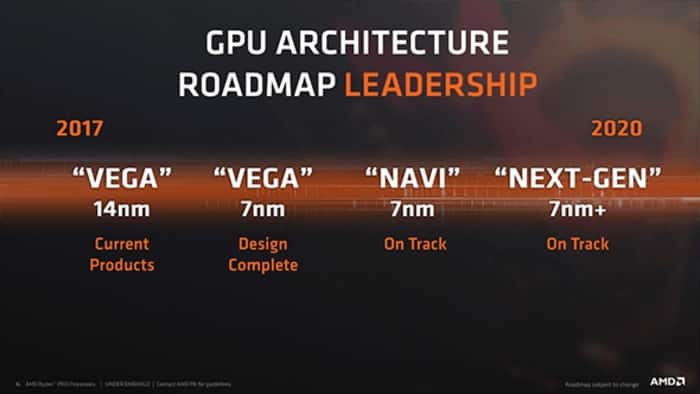 The enthusiast Navi 20 GPU may also support real-time ray tracing. RedTechGaming reportedly claimed in a video that AMD would incorporate Navi 20 GPUs with architectural changes to support ray-tracing. Considering the card's expected release in 2020, the report is in line with AMD’s announcement that the company would only bring ray tracing support to their GPUs after more widespread adoption in games.

AMD could also leverage DXR’s fallback routine to implement raytracing, similar to what Crytek did in a raytracing demo using an AMD Vega GPU. Crytek’s demo changed the ray tracing game plan, urging Nvidia to announce support for the ray tracing feature on 1060 and up Pascal cards as well as Turing GTX cards. None of these cards feature Tensor cores to upscale the images or RTCores to accelerate raytracing but will still support the feature after an update in April; all be it with considerably less FPS even at low to medium settings on some cards.

Although the Navi 20 GPU is set to release in 2020, AMD could introduce ray-tracing to Navi 10 GPUs as well. All things considered, having more than one company offer ray tracing will end its exclusivity and could even impact pricing by making it more competitive, which entails a major win for the consumer.