Stranger on my screen: How apps like Lunchclub and Leap are changing the way we connect

While LinkedIn remains the big daddy of professional networking, one-on-one platforms have loosened that stiff collar-button on the business suit, so to say.

Launched in 2017, Lunchclub describes itself as an AI super-connector for one-on-on video meetings. (Representational image: Pexels)

I stand before the mirror, wiping my make-up and the day’s sedimented stress off my face. Time now to slip into pajamas, sip my nightly cup of chamomile tea and, well, get into the last meeting of the day.

He is a set designer for sci-fi movies, describes himself as a “futurist” and lives some 12,000 kilometres away. To be honest, I am a bit anxious. It’s scheduled to be a 45-minute meeting, and his areas of interest—AI and Machine Learning, GPT-3, VQGAN+Clip, DAOs and Voice Assisted computing—are as good as Greek to me.

“Hello,” he says, flashing an ice-melting smile. It takes me three-odd seconds to take in the setting. The friendly bearded man, originally from Poland, now in Toronto, is sitting on a gadget-studded chair that serves as an excellent conversation starter.

Forty-five minutes later, I find myself wishing the meeting had been longer. We spoke about life after the pandemic, the link between science and Ayurveda and Niagara’s lush wine belt. He tipped me off on a freelance writing gig, and I offered to introduce him to a filmmaker friend in Vancouver.

This, then, is Lunchclub—"an AI superconnector that makes introductions for 1:1 video meetings to advance your career”. It is a superconnector, indeed, having brought me face-to-face with an incredible range of people from across the globe. Investment bankers, film directors, techies, adventurers, shoemakers, magicians… all of this while sitting in my Delhi apartment.

Of course there have been some “interesting” encounters. A man who insisted on selling me an inexplicably expensive water-purifier, a lady who spoke only in monosyllables and a French professor who used 40 of our 45 minutes to diss Macrons in his hard-to-get accent. A small percentage of my “matches” simply didn’t show up. But on the whole, these people have been wonderful to meet. Well-informed, well-intentioned and respectful.

And then there was this London dentist, to whom I owe a life-changing idea. In a particularly low post-Covid moment, the temptation to confide my work-woes to a faraway stranger proved too great to resist. After calmly listening to my story, he said, “Three months ago, my wife lost her job as a software consultant, so she started selling homemade bread mix.”

“Well, I’d say be careful what you wish for—she already has more orders than she can handle.”

It was the right story to hear at the right time. Mega-inspired, I put my love of food to work and created a bunch of finishing salts, flavoured sugars, teas and flours. Packed in pretty boxes, they landed me a big corporate gift order for Diwali!

It’s been more than a year since I joined Lunchclub, and I look forward to my twice-weekly meetings with the excitement of a child. The platform has helped me get over my resistance to video calling. I’ve encouraged friends feeling lonely or going through a rough patch to sign up, assuring them that it is not a dating site in disguise. It is nice to see that many of them are meeting new people.

I discovered Lunchclub during the depths of the depressing pandemic, when human contact had become a forbidden luxury. But it has existed since 2017, and continues to grow bigger by the day, having notched up impressive figures in both funding and sign-ups. Of course, it is not the only one. New players such as Coffeemug.ai have sprung up, and their focus on safe professional connections is heartening.

The beauty of this ever-widening chain is that sooner or later, you will learn about one club or the other. Which brings me to Leap, another phenomenal one that my neighbour urged me to join. Exclusive to women, its catchy tagline, “You didn’t come this far to only come this far” sums up its intention to take you places. The by-invitation-only app has a joining fee and boasts a brilliant user interface, neatly sectioned into clubhouses, events, experiences and resources. And because people still want to meet people, offline events are greeted with astonishing enthusiasm; my first Delhi meetup had 40-plus sign-ups! 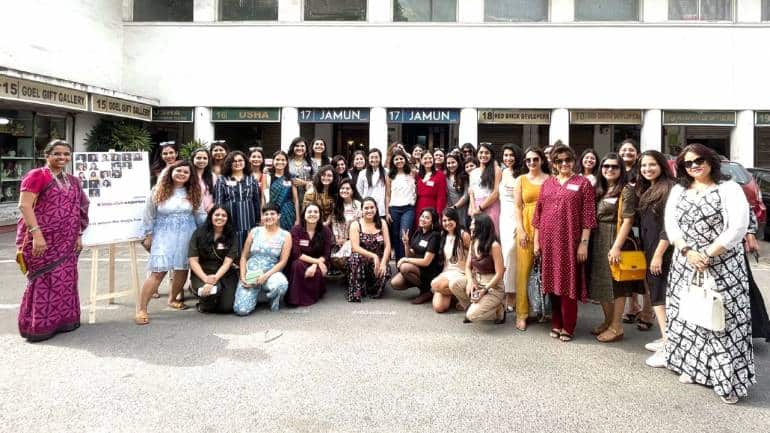 “Born during the pandemic in 2020, we currently have 7000+ members across 15+ countries,” says Ragini Das, co-founder of Leap Club. “In the last two years, we have enabled 10000+ connections for social interactions and professional development. Our members are making career moves, learning with and from each other, travelling together, and a lot more.”

I often wonder why it took so long for these almost ridiculously simple ideas to take shape. While LinkedIn remains the big daddy of professional networking, these one-on-one platforms have loosened that stiff collar-button on the business suit, so to say. The game is changing, and the whiff of fresh possibilities is in the air. Inhale!
Shubhra Krishan is an independent features writer. Views expressed are personal.
Tags: #Leap #Lunchclub #Online Communities #professional network #video conferencing
first published: Aug 27, 2022 12:03 pm