If you get your hands on the 23-year-old Family Reserve, sip slowly, taking all the time in the world.

It was sometime in mid-October 2013 that whiskey aficionados around the world woke up to shocking news: more than 200 bottles of Pappy Van Winkle 20-year had been stolen from the Buffalo Trace Distillery in Kentucky! People would forgive anything but the loss of this cherished bourbon that everyone wants to drink someday and only a few could ever get to!

Inside bourbon circles, they say if you have touched a bottle of Pappy, you have touched God. It is one of the most expensive and the most difficult-to-find bourbons in the world. Especially the 23-year-old Pappy Van Winkle's Family Reserve.

The bourbon's journey began when an 18-year-old lad, Julian Van Winkle, left college in the last part of the 19th century to become a travelling liquor salesman for the WL Weller & Sons distillery based in Louiseville. Soon, an ambitious Julian and another top salesman, Alex Farnsley, decided to start making their own whiskey from the newly formed company, Stitzel-Weller.

The official permission to make alcohol for medicinal purposes during the prohibition years came as a shot in the arm for Julian. On the Kentucky Derby in 1935, Van Winkle opened its first distillery. It became popular for wheated bourbons like Rip Van Winkle which offered a sweeter, smoother taste.

When Julian Van Winkle III took over the Old Rip Van Winkle distillery, the whiskey world had drastically changed. Even popular bourbons were sulking in shelves gathering dust as people were going after colourless alcohol like vodka. Moreover, the Van Winkle family had already sold all its stakes in the Stitzel-Weller distillery. Still Julian Jr was optimistic. He contracted with the company now owned as United Distillers. But that was not enough, he knew, to support his family.

A one-man show in every sense, Julian III was determined to prove the true lineage of his legendary grandfather who popularised bourbon in America.

With the original wheated formula he had inherited from his family, Julian began to increase the age and proof of the old Rip Van Winkle, a risky step at a time when people were going gaga over other kinds of alcohol. It paid off. In 1994, so brazenly Julian showed the chutzpah to release the world's first 20-year-old Bourbon  - Pappy Van Winkle Family Reserve - with the stogie-smoking pic of his grandfather on the label. At the 1998 World Spirits Championships, Pappy Van Winkle scored a hitherto-unheard of 99 out of 100.

Pappy's meteoric rise in popularity depends on other factors also.

"If God made Bourbon, this is what he'd make." With that one statement made in a 2012 episode of 'The Layover, American celebrity chef Anthony Bourdain helped Pappy Van Winkle skyrocket to fame. On April 10, 2018, Pope Francis was pleased to receive a bottle of 23-year-old Pappy  Van Winkle from Father Jim Sichko, Kentucky priest.

What more does Julian want! When Stitzel-Weller stopped distilling in 1992, Julian signed a contract with his new partner - Buffalo Trace. The latter would distill and age the bourbon to Julian's specifications. But for the hardcore followers of Pappy Van Winkle, it hardly mattered who managed and who ran the company. They had entered into a lifelong tryst with the name - Pappy Van Winkle. Even as they know that getting to a bottle of Pappy is one of the most arduous adventures in the world (low production and huge demand). The reason why some even started stealing from the Buffalo Trace Distillery.

So how to taste it if you are lucky to get a bottle?

One distinguishing feature of Van Winkle bourbons is the telling presence of wheat instead of the usual rye in the liquid. Which makes it sweet. If you get the signature product, the 23-year-old Family Reserve, try it neat. Want to spoil it a bit? Use ice or a bit of water.

Sip slowly, taking all the time in the world, for you may not get another bottle in your lifetime. 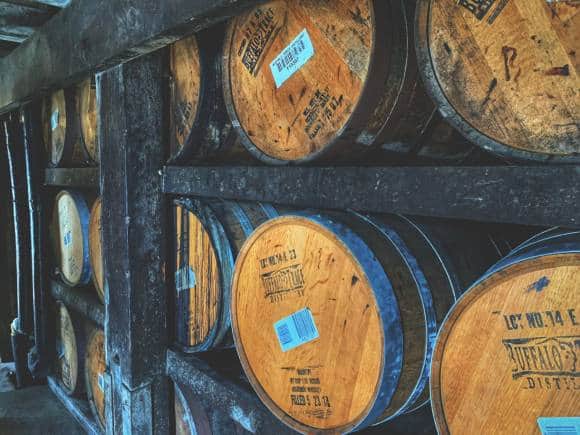