172@29@17@138!~!172@29@0@53!~!|news|trends|expert-columns-2|reopening-indian-skies-how-many-flights-are-up-how-many-planes-are-being-used-and-other-questions-answered-5405661.html!~!news|moneycontrol|com!~!|controller|infinite_scroll_article.php!~!is_mobile=false
Watch experts decode 'The rise of ESG investing' on October 29 at 4pm. Register Now!
you are here: HomeNewsTrendsExpert Columns

Reopening Indian skies: How many flights are up, how many planes are being used and other questions answered

As airlines increase presence, let us check the numbers for a single day – looking at the planes, utilisation, presence and more.

It has been over two weeks since domestic flying re-started in India after a surprise announcement on Twitter from the minister of civil aviation. It has been challenging for the airlines to get up and running within days after grounding over 650 commercial aircraft on March 25. This was coupled with state governments wary of accepting passengers from other states leading to delay in opening up of certain airports like Kolkata. Even today, there aren’t any flights between Maharashtra and Tamil Nadu. No sooner had this confusion settled, a new one started – this time with the data which was published which mixed up departures with air traffic movements.

As airlines increase presence, this article goes behind the numbers for one single day – looking at the planes, utilisation, presence and more.

Mondays and Fridays have traditionally been the busiest days in the skies. For this calculation, I looked at Friday, June 12, to see what airlines are doing in an environment which is not only highly challenging but also regulated – artificially!

Since the day of grounding to the day or re-start and beyond, airlines have been involved in repatriation flights, cargo as well as carrying passengers to isolation facilities across the country. While these continue, it is prudent that such are exempted from the calculation.

How many planes are in the air?

Airlines in India have a little over 650 aircraft for commercial operations. While a small portion of those is the Air India wide-body aircraft which primarily operate on international routes, 13 B737 MAX of Spicejet have been grounded since last year in line with the global grounding of the aircraft.

The government allowed a maximum of 33 percent of capacity by airlines, in proportion. A few states and airports have further capped this capacity but airlines have been operating anywhere between 220 and 230 planes on a given day. This does not include the planes committed by Air India for the Vande Bharat Mission or the charters operated by private airlines, outside the purview of Vande Bharat Mission. The interesting stats come from the smallest airlines – Star Air and Trujet – that are operating most of their flights under UDAN, if not all. The RCS-UDAN routes have their own fare cap, unlike the one proposed by the government post-COVID-19 and the airlines also are entitled to subsidy. While Spicejet, IndiGo and Air India regional are also operating RCS-UDAN flights, this constitutes a smaller percentage of their total flights.

Most airlines except Go Air are operating in line with the market share and capacity share they had pre-COVID. IndiGo operated 47 percent of total domestic flights on June 12. While Vistara and AirAsia India operated 6 percent each. Spicejet operated 15 percent of total flights with Go Air contributing just 3 percent of the total flights, lesser than Air India regional.

However, this translated to over 50 percent capacity by seats deployed for IndiGo as the airline also deployed its A321neos which seat 222. While Air India regional with its all ATR operations had 9 percent of the flights, by capacity the number dropped to 4.1 percent.

For years, airlines have put the focus on utilisation and having a lot of red-eye flights. Increased utilisation helps distribute costs over more flights and block hours helping the bottom lines for an airline. However, utilisation has touched new lows with an average of three flights per aircraft. For the low-cost carriers, this is less than half of what is usually planned. This also indicates that more aircraft are being utilised than needed to operate – which is probably done to cater to crew requirements and engineering requirements and averaging the utilisation across multiple aircraft to push engineering expenditure to a later date.

IndiGo – the country’s largest airline by fleet and domestic market share had stated that it would continue to induct the A320neo family aircraft and would phase out the older A320ceo aircraft in fleets. A look at the utilisation details clearly shows the intention with some aircraft movements indicating preparations for re-delivery.

Go Air operated all its flights with the A320neo, while keeping all its A320ceo grounded. As for IndiGo, of its total A320 family operations, 65 percent were with the A320neo family.

Which routes are experiencing traffic?

The interesting bit since the start of operations has been the routes. There have been routes which have seen one-way traffic and there have been routes which have seen single-digit passengers in the flight. The busiest route by frequency has been Delhi–Kolkata–Delhi with 11 frequencies each way, followed by Delhi–Patna–Delhi with 10 frequencies. This is followed by routes like Delhi–Pune and Hyderabad–Delhi. Interestingly, Delhi–Mumbai–Delhi, the busiest route in normal times saw only 4 frequencies across airlines and there were 213 sectors which saw just one flight.

The route mix is a dynamic thing with airlines operating certain routes with a gap of a few days, mostly due to a lack of consistent demand. Like aircraft which are being utilised in rotation, routes are also being operated by rotation.

However, with a near 60 percent average occupancy – on most flights social distancing norms and a possibility of middle seat remaining empty would take care of the customer apprehensions.

What are the challenges?

With just 34 percent of the fleet operating, Indian airlines are definitely looking at an excess of capacity in the skies. Without any clarity on when more flights will be allowed and with ever-increasing cases of COVID-19 in the country, recovery isn’t going to be quick. 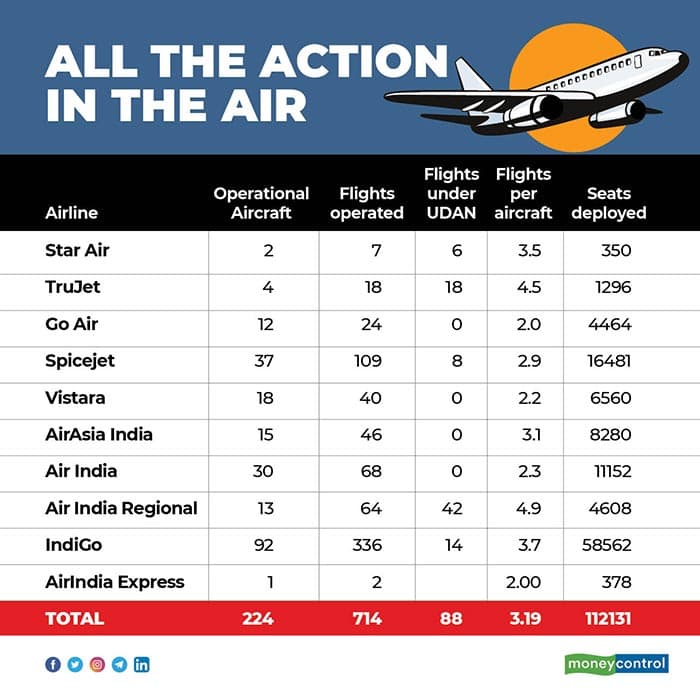 The situation is anything but normal and while the government has also pushed for RCS-UDAN flights to be operational, the current spate of fliers still seem to be those who were stranded or have a long pending trip due to family reasons. Until business and leisure travel returns, airlines will find it hard to continue.

While IndiGo’s CEO Rono Dutta was optimistic about the loads and future, I remain cautious because we don’t know just yet how the COVID-19 pandemic is spreading across the country and when the business and leisure demand would retain – which remains the backbone of the aviation industry in the country.

Note to readers: The data has been sourced from social media, flightradar24 and analysed by Network Thoughts.