‘Mukundan Unni Associates’: How the hit Malayalam thriller got made, a deep dive with director Abhinav Sunder Nayak and co-writer Vimal Gopalakrishnan

Malayalam actor-filmmaker Vineeth Sreenivasan stars as a psychopathic lawyer who mints money from fake accident insurance claims in the film, which is currently streaming on Disney+ Hotstar.

At that point, the Kozhikode-born filmmaker had slipped into clinical depression after the release of his debut feature film, the Tamil-Malayalam bilingual Vaayai Moodi Pesavum, as editor. The film, which was Dulquer Salmaan’s first Tamil release, was a small success in Chennai, but its Malayalam version, Samsaram Arogyathinu Hanikaram, had flopped in Kerala. Suddenly, work offers stopped coming to Nayak as most online reviews blamed the editing for the film’s failure.

“People who used to call me offering work disappeared,” Nayak told Moneycontrol.com. “I cut myself from cinema for almost a year and stopped watching films. I began looking for jobs in the advertising industry. Then my therapist pushed me to just go and check out any film and I randomly picked Nightcrawler.”

An hour into the film, Nayak began laughing at the morbid dark comedy which follows an ambitious and unethical videographer, played by Jake Gyllenhaal, rise up the ranks in journalism, frequently putting others in harm’s way. Nayak fell in love with Nightcrawler and he credits it for reigniting his passion for cinema.

Nine years later, his directorial debut, Mukundan Unni Associates, has charmed audiences and critics for its uncompromising depiction of a Nightcrawler-like amoral psychopath chasing success at any cost. The film, out in theatres in November last year, is now streaming on Disney+ Hotstar.

The film kickstarts when Unni chances upon a scam masterminded by another lawyer Venu (Venjaramoodu), who, in collusion with hospitals, insurance agencies, cops and private security companies, gets patients to sign false motor-accident insurance claims, draw big money up to lakhs of rupees, sometimes, even crores, where each player gets a cut, including the patient earning a modest sum.

Soon, Unni ends up not only snatching Venu’s business but his greed leads him to endanger lives, going so far as to cause a fatal bus accident and murdering eyewitnesses. Spectacularly, the film doesn’t offer any poetic justice as Unni continues to only rise in his chosen path until the film’s end.

“If someone would have asked me to change the climax, I would have dropped the film,” the 33-year-old filmmaker says. But why the insistence to let the bad guy go scot-free?

“Circumstances involving people like Unni affected me emotionally in my life,” Nayak adds. “When you encounter such people, you start questioning your moral-science lesson: does hard work, honesty, perseverance, really pay? Is karma really a bitch? I have seen really good people die from terrible diseases and others succeed without remorse and with absolute disregard for other people. You start questioning the very basis of how the world works. We romanticise success, especially biopics do. My idea was to make an anti-biopic and make people wonder whether successful people find success by only being good, make people think twice about who their role models are.”

Nayak offers a nugget of wisdom: “Empathy is the biggest enemy of success. I believe successful people are psychopaths or narcissists, whom you will find in most white-collar and high-profile jobs.” Psychopath is the best description for Unni. In one scene, Unni, who ensures he is always well-groomed and professionally dressed, is comically startled to notice that his lackey, who had so far been a loser, has learnt his ways and is, therefore, a potential competition. This scene is reminiscent of moments from another psychopath classic, American Psycho (2001), a movie Nayak frequently enjoys as a “stressbuster”.

But despite Nayak speaking of being affected by people like Unni, he did not make a film from the perspective of a victim because not only has that film been made a million times but “it would turn into a very emotional film,” he explains. “I wouldn’t be able to make my point which is to expose how these people think. More than empathising with the victim, we need to understand how people like Unni think, so we can guard ourselves from their emotional and psychological traps.” 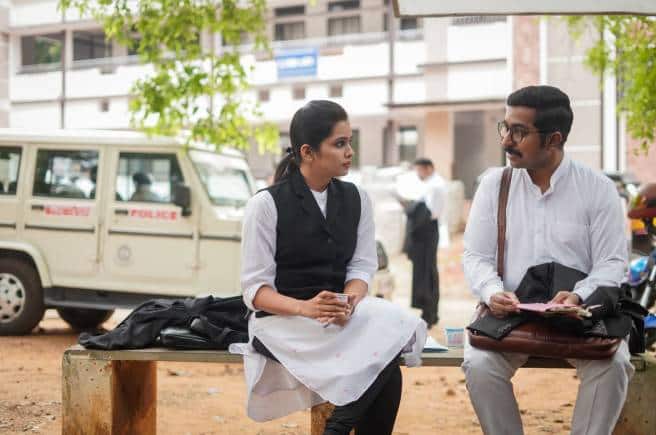 Tanvi Ram and Vineeth Sreenivasan in a still from 'Mukundan Unni Associates' (2022).

“An evil man’s successful journey” was the theme that Nayak had in mind much before the legal profession, the medical industry and other details entered the screenplay. These were brought by co-writer Vimal Gopalakrishnan. Mukundan Unni Associates marks the screenwriting debut for the 38-year-old marketing professional.

“If I make somebody evil within a family, say, harming relatives or family members, he becomes a scoundrel,” Gopalakrishnan tells Moneycontrol.com. “But if I can attach evil to a profession that common people understand and the profession also affects common people, then nothing like that. That’s how the central character became a lawyer and I learnt about the Motor Accidents Claims Tribunal and followed through with my research.”

Since the film is a “character study” following a single person, much like Nightcrawler or American Psycho, Gopalakrishnan knew the way to keep the screenplay interesting was to offer “something new or novel” in each scene. “For example, in the Oscar-winning Spotlight (2016), you learn something new about the church and how things work there in each scene,” he says. Similarly, we got to know more about the minutiae of Unni’s complex web of scams in scene after scene.

Gopalakrishnan mentioned how he has been inundated by Instagram messages about how he cracked the “twists and turns” in the screenplay that keep the film relentlessly engaging till the last minute.

“The final script took us forty drafts,” he said addressing them. “See, we cannot make the audience like him or empathise with him but we have to make the audience fascinated by him. Nayak suggested that Unni should have to work hard to clear any obstacle coming his way so that even five per cent of the audience thinks, okay, fair, Unni deserves his success.” Indeed so, as Unni’s road to success is hustle culture 101. When he can’t obtain a wound certificate from a hospital to clear one of his many fake insurance claims, he engages in forgery. When that is caught, he creates a mindboggling scheme to throw the investigating officer off his tracks. Nayak and Gopalakrishnan’s screenplay pile on one roadblock after another for Unni, and in extremely spectacular (and evil) ways, he keeps clearing them.

Mukundan Unni’s casting is, perhaps, the film’s biggest masterstroke. Nayak had previously reached out to “star” actors for the role. One lost interest after a year, another never responded to any message, the third initially said yes but then disappeared. Because of the coronavirus pandemic-induced lockdown, the film took around five years to make. During this time, Nayak and Gopalakrishnan considered casting Sreenivasan.

“Among Kerala audience, Vineeth ettan (big brother) has a very good name, almost like the Mahatma Gandhi of Malayalam film industry,” Gopalakrishnan says. “Older people also call him Vineeth ettan. Since Mukundan Unni is exactly opposite of his personality, we thought the casting would be a surprise.” The film also gains from extremely crisp editing (Nayak co-edited along with Nidhin Raj Arol). “I believe the filmmaker’s personality should shine in the film itself,” he says. After all, his WhatsApp bio declares: “Cut the pleasantries and come to the point.”

Besides Nightcrawler and American Psycho, Gopalakrishnan listed other influences for Mukundan Unni Associates: Paul Schrader’s script for Taxi Driver (1976); VKN’s 1969 novel Arohanam which follows the rise of a politician; Anand Neelakantan’s novel Asura (2012), which looks at the Ramayana from Ravana’s perspective; the Malayalam films Uyarangalil (1984) and Thaniyavarthanam (1987).

Mukundan Unni Associates, made on a low budget, which Nayak doesn’t want to disclose, has already turned in a profit in Kerala (Rs 10 crore worldwide) and he hopes the online release gives it a second lease of life. “The distribution and offline marketing were bad,” Nayak says, “Still, the film did well in cities in Kerala, simply based on word-of-mouth. Not so much in townships and outside Kerala. I visited a few theatres to track audience reactions, expecting youngsters to lap it up, but I was stunned to see older audiences enjoying and clapping.”