Kubbra Sait: "To play someone so driven and lethal as Phara in 'Foundation' takes a toll on you mentally"

The 'Sacred Games' actor on her international debut in the sci-fi series 'Foundation' on Apple TV + where she plays a feisty character named Phara.

Actor Kubbra Sait as Phara in 'Foundation' on Apple TV.

After playing the transgender woman Kuckoo in the critically-acclaimed Sacred Games on Netflix, Kubbra Sait was game for a new challenge. So when she was offered the role of Phara in the book-to-screen adaptation of Isaac Asimov’s sci-fi book series Foundation, she gave it her all. Her international debut, with director David S. Goyer, sees her rubbing shoulders with the likes of Jared Harris, Lee Pace, Terrence Mann and Laura Birn.

In an interview, she spoke about her role and the mental and physical prep it required. Excerpts:

How has the reaction been to the series and particularly, to your role?

The reaction has been overwhelming, humbling and fantastic! I had to keep things under wraps for a very long time, and the shoot process also kept me away for nearly a year. During those times, I could not speak about anything, and everyone thought I was on a long holiday in the Canary Islands and Ireland. Now when my friends and family have finally discovered where I was and what I was doing while the world stood still, they are amazed and their reaction is priceless. Over and above, the show is aired in over 100 countries across the globe, so I am pinching myself at the scale of this. It has resulted in a whole new audience base and I am constantly grateful and enjoying the moment.

Can you tell us a bit about the audition and how you bagged the role of Phara? What was your approach to the audition process?

The process was daunting for sure. I went in for a screen test and I was asked to fly down to Ireland from India. This was in December 2019.

You walk in and there is this really massive studio; there is a giant hall, the production office, with everyone’s mugshots on a big wall and there is an empty spot reserved for Phara. You know that you can do anything but it will only be real when your photograph is up on that wall. It isn't real until that happens. The greed and the hunger that you have to see your face on that wall drives you to learn, to perform, to do whatever you need (to do) because that is responsibility in your face. Ironically, they called me back after my audition and said to do it one more time as they saw something and the same thing happened with me and Anurag Kashyap during Sacred Games.

Can you take us through the prep required for this role? Also, were you familiar with Isaac Asimov’s 'Foundation'?

Foundation required me to learn a whole new language, a language that does not exist on earth, a language that was created just for the show. Over and above that, the physical aspect required me to train in high octane stunts, with an armour, a sword, the prosthetics, all in place. The prep needed to be done much in advance and I have given it my all; blood, sweat and tears. The tears were when it all ended and the day they said, ‘it is a wrap for Phara’. It is only then I realised the magnitude of it all, the sheer scale of working alongside the makers of iconic shows like Batman, Superman, Morning Show, Game of Thrones, and that is when I broke down. I had read the book as well, and that was a big part in understanding the whole process.

Mentally, how prepared were you to take this one on?

One has to be mentally prepared to play a character as focused albeit destructive like Phara. To play someone so driven and lethal takes a toll on you mentally. Phara as a character is very complicated. She has a single-pointed vision; she is a force to reckon with and she is going to take anything and everything down with her, even if it means herself. I am not that person at all. I look around and I observe. 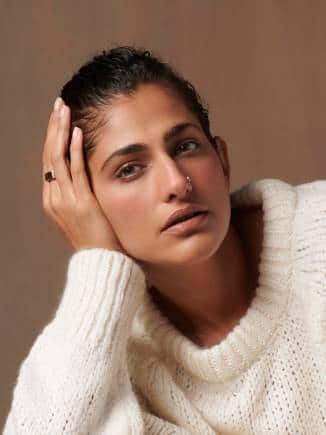 Do you think casting Indian faces for international projects is becoming more exciting and less of a cliché?

Yes, I believe that the year 2020-21 has established one thing for sure, and that is the fact that content is king. Now with this, actors have a whole new world that has opened up for us. The audiences are hungry to see interesting and fun content, and this has given Indian actors an opportunity to be a part of exciting projects where you are not playing the quintessential "brown" person. The stereotype is long gone and it is characters like Phara, something that I am very proud to be a part of, that are facilitating this change.