DATA STORY: Indians spend more time reading than anyone else in the world

On an average, Indians spend more than 10 hours a week reading, according to NOP World Culture Score Index.

An Indian man reads a book inside a bookstore in the northeastern Indian city of Siliguri October 30, 2005. After years of being mostly restricted to the Anglophone market, Indian writers are being snapped up in the European market from France and Germany to Spain and the Netherlands. Picture taken on October 30, 2005. To match feature Arts-India-Writers. REUTERS/Rupak De Chowdhuri - RP2DSFICFNAA

The popcorn-munching book fair lovers have established it and India's rich heritage of Vedas and Shastras stands testimony.

Among 30 major countries surveyed, the NOP World Culture Score Index ranks India as the country that loves reading the most if the time spent doing so is taken into consideration.

Indians clocked 10.4 hours of weekly reading, as per the list. On an average, that’s around one and a half hours of reading in a day.

After India, Thailand and China are placed second and third on the list, clocking 9.24 hours and 8 hours respectively.

The next three countries — Philippines, Egypt and the Czech Republic —read 7.36 hours, 7.3 hours and 7.24 hours respectively on a weekly basis. 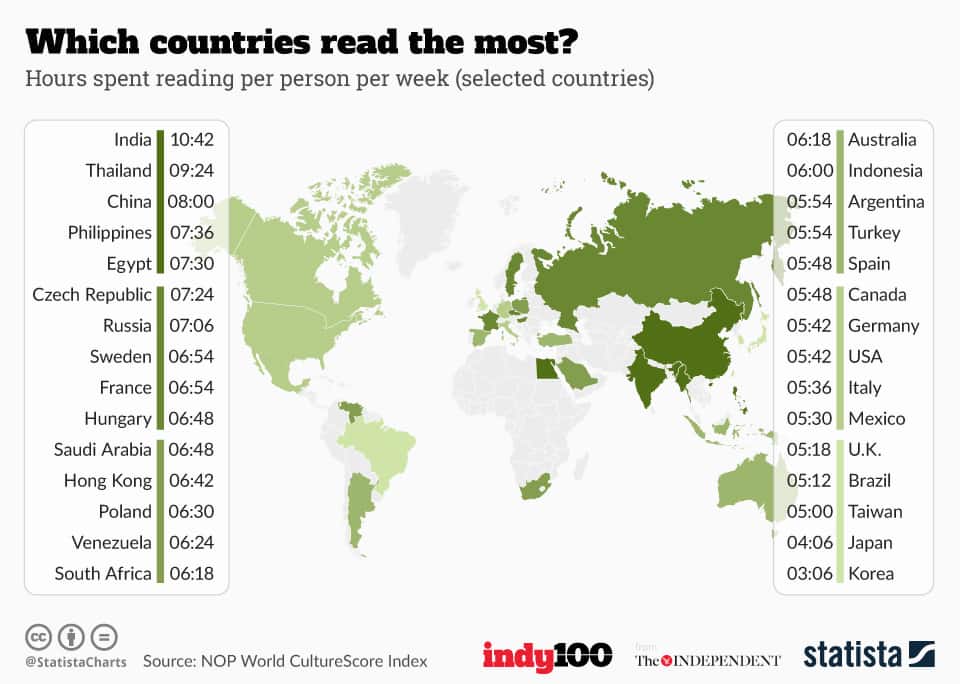 Is there a correlation with literacy?

Surprisingly, the reading craze has nothing to do with literacy as European countries like Finland, Norway, and Denmark- all of whom are known for high literacy rates and excellent education systems - fail to figure even in the top ten of the list.

The only two European countries with an impressive education system that also figure in the top ten are Sweden and France at eighth and ninth positions respectively.

It’s not that India's literacy figures are bad at all – but they’re not top of the world either.

India has a literacy rate of 74.04 percent (as per the 2011 census) whereas the others in the list which trail India such as Thailand, China, Philippines, Egypt have literacy rates of 93.5 percent,  95.1 percent, 95.4 percent, 73.9 percent respectively.

The question thus arises: What is behind India's high rank?

A reason that perhaps contributed to India’s top billing on the list is the recent wave of successful Indian authors – Ravinder Singh, Amish, Jeet Thayil and Arvind Adiga (who was also awarded Man Booker Prize for The White Tiger) —  who have created a much-needed disruption in the Indian publishing business through their popular titles. Add to that, a thrust provided by social media and e-books.

Another factor that can be attributed to this trend could be how easy it has become for India's growing number of internet users to access their books of choice.

As per a report by The Economic Times, sales of Amazon's Kindle until March 2016 rose by 80 percent in the country.  The report further maintains that "Kindle users in India download 10 times the number of books, in comparison to ordering physical copies on Amazon" showcasing how rampantly reading has picked up across the country.
Sangeeta Bose
Tags: #books #India #trends
first published: Nov 1, 2017 07:00 pm