How women navigate a world designed for men, and the price they pay

Caroline Criado Perez’s data-supported book explains how women face risks to their careers, lives and health due to systems and designs that see the default human as male.

The irony of a man reviewing a book that is about the underrepresentation of women is not lost on me. My only defence is that while it is indeed about sex and gender, it is also about mindset.

In the last few years, I have tried to be more conscious of the challenges that women face at the workplace, in public spaces, their everyday lives, and be more aware of how the world works differently for them in the many things that men take for granted. Despite my best efforts, I continue to be surprised by my ignorance regularly.

But why should I have to be conscious in the first place? One would think that when products, services, spaces and so on are being designed, the creators would obviously keep in mind the needs of a segment which constitutes almost 50 percent of the users. If you’re a woman, you know the answer. And that’s what this book is about. 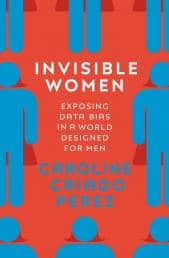 As the blurb of Invisible Women: Exposing Data Bias in a World Designed for Men says, imagine a world where the phone you use is too large for your hand, where the safety of the vehicle you travel in has not really been designed with you in mind, and the medicine you have been prescribed is just wrong for you because you weren't adequately represented in trials! In essence, a world in which the default human is male.

Caroline Criado Perez uses data and case studies from multiple domains to highlight how women haven't been fairly represented, and in many cases to also show how correcting this could lead to a better result not just for women, but for humanity overall. Public transport, urinals (ever wondered why there's always a queue for women while men saunter in and out?), workplace practices, product design, medicine, disaster relief - the pain is everywhere. And they are at various levels of seriousness. Some made me say, "Oh, I didn't think of it that way", many made me grimace, and most are just appalling.

And that is why, I believe, this is a book that men and women should read, for different reasons.

For women, it will probably serve as an insightful articulation of many things that they have thought about, talked about, or attempted to change. It would give them information on how women around the world have taken them up as challenges and sometimes succeeded in setting things right. I will stop at that, and not be presumptuous in assumptions. Fellow men, this is going to take longer. The best way to explain it is with an anecdote from David Foster Wallace’s unforgettable speech. The story goes that two young fish swimming along meet an older fish swimming the other way, who nods at them and says “Morning, boys. How’s the water?” The two young fish swim on, but after a bit, one of them looks over at the other and goes “What the hell is water?”

Men, my friends, are the young fish. The invisibility is all around, it manifests itself in many ways, and it is by definition, invisible to us, because men built it for other men. Some of it is intentional, and some of it unconscious because we have never questioned why. We didn’t need to because we are privileged. I think we will see the world differently after reading this book.

The challenge for us would be to remain conscious of the inherent bias in our thinking, our behaviour, and the way we design objects and systems. One really doesn't have to be a genius to understand the impact better representation can make, at an individual and societal level.

With all that being said, in the end, I also have to admit, quite sheepishly, and to underline the point, that while many of my favourite authors are female, I might have completely missed this book if my wife hadn't made it part of our reading list! I know, I will repeat to myself, this is water.

Manu Prasad is VP Marketing at Scripbox, Bengaluru, and writes on www.manuscrypts.com.