After eking a living as a domestic helper, snack-stall owner, tea-seller and tailor, single mother Minaj Nadaf now drives an auto-rickshaw, wins marathons and even works for charity!

A single mom of two teenage kids, a domestic helper, and an auto rickshaw driver who periodically runs in marathons, Minaj Nadaf’s life is riddled with challenges but she is facing them head-on, and acing them in whatever way she can.

In fact, she has added one more duty to her already packed life: helping serve in the pandemic. She has been delivering food packets to the needy for free, especially migrants returning to their villages in UP in the first half of the nationwide lockdown.

The Mumbai-based 35-year-old’s day begins at 5 a.m., cooking for her children, and then running her auto rickshaw for a living till noon. She does housework till 7 p.m. and is back on the roads till the wee hours of the morning. It is a routine that she has followed ever since her “no-good husband abandoned her, went back to his village and married again,” she says in Hindi. Minaj works odd hours in different jobs just so she can complement a steady monthly income. Though Minaj talks to you with a smile, one can see the pain behind it. Hers has been a life of struggle, as it was for many underprivileged Muslim girls in Kolhapur, Maharashtra, where she was born. Her “good-for-nothing” father could not bother to work to support his family, and the burden fell to her mother to feed all their hungry mouths.

Being the eldest of her siblings, Minaj helped her mother run their little farm. Even the basic necessities of life were denied to the children in her family back then. That is probably where her resolve began: Today, she says, her children get precedence over all that she does.

A mother of two even before she was 25, Minaj moved to Mumbai and began living in Nalasopara. Saddled with a drunken husband, she felt as if her painful past was rearing its ugly head again. He refused to stay in one job, and as the fights turned into violent beatings, she found herself lonely, angry and penniless.

What saved her was the fact that when villagers migrate into Mumbai to earn, they usually come in groups and share the same living spaces. She cooked, cleaned and housed five or six people, thus saving her family’s share of the rent. 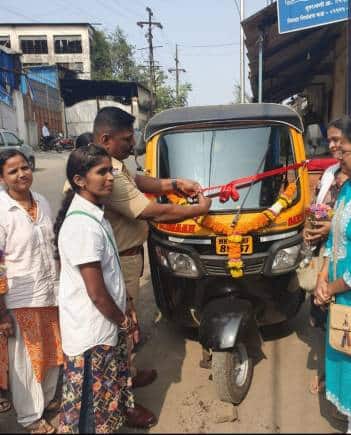 Minaj Nadaf gets an auto

Minaj had brought her sewing machine with her from Kolhapur. Between her sewing and housekeeping work, her brother’s help, and requesting a school for more time to pay the fees, her daughter continued her schooling. Minaj’s husband finally left her in 2013. Except for an initial sense of fear, Minaj suddenly felt free to go ahead and look for jobs.

There was nothing she would not try. Since she could sew, she eventually joined a garment factory in Vasai and simultaneously worked as a cook, juggling time. But that didn’t last long as the travel cost her too much. Then Minaj went on to work for a local restaurant out of sheer necessity. She churned out street food like vada pav, missal pav, and so on, but the owner started exploiting her labour after a year and reduced her salary, so she decided to run her own snack cart.

This time her brother offered to fund her new venture. Her menu consisted of samosa and vada pav (at Rs 7 each), missal (Rs 20), vegetarian cutlet (Rs 6), gulab jamun (Rs 4) and more. Her brother took over in the morning while she continued with her housework in other people’s homes.

But this arrangement didn’t last very long as workers from Mumbai’s municipal corporation harassed her repeatedly despite bribes, she says.

Minaj knew she just had to bring in at least Rs 10,000 to survive the month, including rent, but it was just not happening. She again tried something new. ‘I knew I could sell my food, having tried the hotel, then my own snack stall. I took one more leap into the food business, and took my wares to the Nalasopara Railway Station every day at 6 a.m. I squatted there with my offerings like onion bhajias, seera, upma and chai.”

She was reminded every day that she had vowed to look after her children and educate them, and nothing was going to stop her, not even bitter tears of grief or shame.

She soon realized she could do more than one thing easily. She approached the Samit Mahilya Kendra, who helped her get a job at Dr Ambalar’s Ayurvedic Research Centre at Vasai. From 9 a.m. to 5 p.m. she worked there among the housekeeping staff, and continued being a domestic helper the rest of the time. This went on for five years. “Somehow there were many good people who came into my life, with monetary help, some with partial fees and some with books for my children, and life went on. I started having dreams of learning how to ride a rickshaw for my livelihood,” she narrates.

One day in 2017, Minaj chanced upon a pamphlet about a marathon. After seeing the prize money of Rs 40,000, she decided to attempt it.

Having no idea of nutrition, exercise or what a marathon actually was, Minaj filled up the form and paid Rs 800 as the entry fee. It was only when she went to get her marathon T-shirt and heard about the nutritious diets and fitness regimes that other runners were adhering did she realise what exactly she had got herself into. She would need running shoes as well! As she had taken on an extra job of a bathroom cleaner, her co-worker gave her an old pair of shoes that belonged to her daughter.

Minaj began running in a nearby garden for practice. On the day of the marathon, she felt very small in a crowd of 1500 people. But nothing stopped her, as her heart was set on the win. As the race began, she shot off in her oversized tee shirt, clad in second-hand shoes, along with her anklets and toe rings intact.

Halfway, Minaj picked at the chocolate from her pocket, now realising that she also needed water for the 42 km run. As luck would have it, the soles of her shoes came apart, so she continued in her socks, sans toe rings. Gasping, she finished her 42 km run in seven hours seamlessly, and collected her medal, all the while worrying that she would not make it to work back on time. Understandably, she didn’t. Not even knowing how she had fared, she went straight home happy that she had completed the race against all odds.

Ten days later, the organisers called her and asked her to collect her prize money of Rs 30,000 as she had come second in her category (Vasai Taluka). She immediately paid off a part of her husband’s debts, some of her own loans, the children’s school fees, and then breathed a sigh of relief.

Nothing remained of the prize money except her happiness at actually winning. She didn’t join any more marathons for a while for want of the registration fees, not knowing how to pay them online, and not able to take holidays from work. But soon, the race called her back. 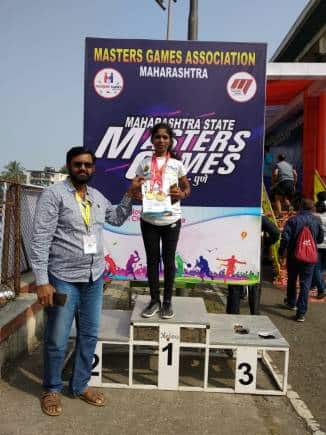 In 2018, she took on a few smaller runs and won – still with no practice, specialised diet or supplements. In 2019, she ventured into the nationals in Nasik, boldly after she had already won in the state levels in Mumbai (21 km). She was still doing two jobs, but she felt like she was invincible because she was a mother and her strength came from her convictions.

Minaj says she has succeeded in half her dreams: her children Saniya and Subhan are happily entrenched in their studies, while she still runs her marathons, works as cleaner, drives her dream machine, and volunteers to help feed the poor.

She now dreams of running in an international marathon. Here’s a woman who just won’t quit!