WhatsApp is working on adding an edit button for text messages

WhatsApp is working on a button that will allow users to edit text messages after they have been sent, as it looks to revive the work on the feature it abandoned five years ago.

A report from WABetaInfo, the Meta-owned communications platform said the button can be pulled up, by long-pressing the message that needs to be edited, to select it and then tapping on the three-dot menu.

Then select the 'Edit' option and you can make the changes to the message. 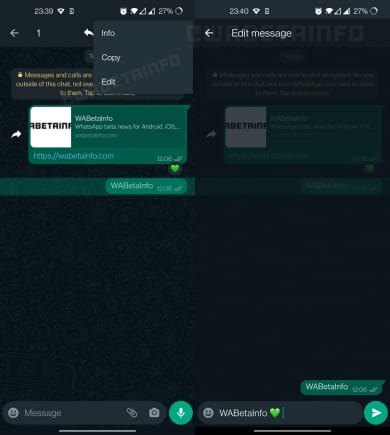 This isn't the first time that an edit option has been found in a WhatsApp beta. Back in 2017, the edit button was part of WhatsApp's beta for Android but never made it to the users after the feature was scrapped in the development stage.

While there is still no confirmation from the company, here is hoping that it makes it out of beta channels this time around.

Also spotted recently in the land of WhatsApp beta is a feature that will allow users to save some disappearing messages. The saved messages can be accessed by visiting the contact or group info page, where they are saved in the "kept messages" section.