Rise of Ethereum: Why this cryptocurrency skyrocketed 3000% in 2017

Like bitcoin, ether is a blockchain based asset (similar to a security, like a bond, issued in physical form) which acts as a fuel operating the distributed application platform Ethereum.

Overshadowed by the more illustrious bitcoin,  altcoins --  alternative cryptocurrencies launched after the success of Bitcoin -- traded in a narrow range for a long time. But that changed in 2017 when investors  decided that they needed to have a diversified portfolio of digital currencies, sparking a rush for altcoins.

The most noticeable rally has been for ether, which has appreciated over 3000 percent year-to-date (YTD) from levels of USD 8 to USD 268, as per the CoinDesk price index.

Trading at all-time highs, ether is creating a new price record every other day.

Like bitcoin, ether is a blockchain based asset (similar to a security, like a bond, issued in physical form) which acts as a fuel operating the distributed application platform Ethereum.

As per Coinmarketcap, ether at present has the second largest share in the cryptocurrency market space only after bitcoin and many believe that it can overtake its senior in the coming days.

While it is known that only a finite amount of bitcoins -- 21 million --  will be mined, people tend to think of it as virtual gold, a safe haven investment, and hence its price movement resonates with the characteristics of a limited commodity. Such an intrinsic characteristic is not available for ether which can explain the price movement. However there are a few factors experts says may have influenced this rally. Here is a list of developments which can explain this price movement.

Rise of the Ethereum Alliance

The recently formed Enterprise Ethereum Alliance (EEA) to connect large companies to technology vendors in order to work on projects using the blockchain is believed to be one of the major influencers on the ether price up move, as per a survey done by CoinDesk.

Under this alliance global giants like JPMorgan, Microsoft and Intel have come together to explore the benefits of enterprise blockchain technology. Many believe that it was the bitcoin scaling debate which led to this rally. As a consensus was not being reached on how to update the bitcoin blockchain to accommodate the increasing volume of transactions, many shifted their money to the second most popular option -- ether.

Initial coin offerings (ICOs), a new way to raise capital for cryptocurrency ventures, have picked up pace since the start of the year and many of these crypto-ventures are based on the ethereum blockchain, which means this will lead to more utilization of ether tokens, helping in the price uptick.

All aboard the hype train!

But the major reason  which can be attributed to the sudden spike in interest for buying ether could be a result of a herd mentality.

Clearly visible from the graph below, a comparison of ethereum price and the rise in its search interest run directly proportional to each other. 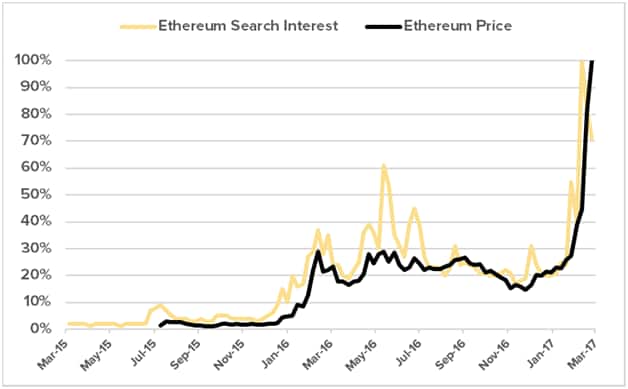 The rise in bitcoin's price since 2016 sparked a global interest in cryptocurrencies in general, experts believe that the sudden rally in altcoins like ether can be a result of that as people who missed the bus with bitcoin are rushing to get onboard the altcoin hype-train.