Xiaomi is set to launch the Redmi Note 11T, Note 11T Pro, and Note 11T Pro+ at the event alongside the Redmi Buds 4 Pro and RedmiBook Pro 2022 Ryzen Edition.

Xiaomi has confirmed several details of the Redmi Note 11T Pro+ ahead of its launch. According to the company’s official Weibo page, the Redmi Note 11 TPro+ will feature an LCD screen with a 144Hz refresh rate. The display will have a 20.5:9 aspect ratio, DC Dimming, and Dolby Vision support. 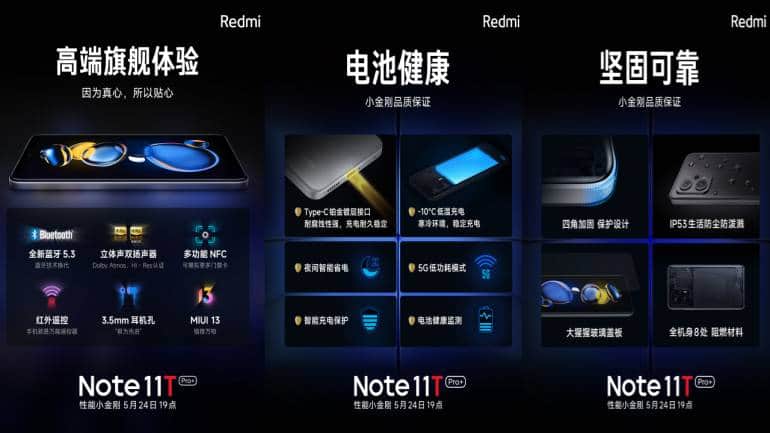 The Redmi Note 11T Pro+ will also feature NFC, Bluetooth 5.3, and a 3.5mm headphone jack. The phone will come with stereo speakers with Dolby Atmos and Hi-Res Audio support. The phone will run on Android 12 based on MIUI 13. It will also come with an X-axis linear vibration motor.

Xiaomi also touted the build quality of the Redmi Note 11T Pro+. The phone will have an IP53 rating for dust and splash resistance, a sturdy Gorilla Glass cover, and a four-corner reinforcement protection design. The Weibo posts also point to a triple-camera setup on the back of the Note 11T Pro+.
Moneycontrol News
Tags: #Redmi #smartphones #Xiaomi
first published: May 22, 2022 03:26 pm