The Area-51m shows us that bigger is much better.

As the gaming laptop trend moves towards “portable power”, an increasing number of manufacturers are ditching the powerhouse designs of the past and opting for sleeker alternatives. The thinner, lighter, and less conspicuous gaming notebooks of today are capable of handling any task thrown at them. But unlike those portable powerhouses, the laptop we’re reviewing today is anything but portable.

What we have on our hands is nothing short of an overpowered behemoth. At little under 4 kgs, the Area-51m doesn’t care about your lap, back or desk, all it cares about is maxed out gaming performance, but can a laptop, no matter how big, really tangle with a desktop; let’s find out.

At about Rs 3,60,000, the Alienware Area-51m is a serious piece of hardware. The magnesium alloy chassis has to be one of the most rigid we’ve ever felt with absolutely zero flex. Everything about the Area-51m’s design screams gaming, while the soft touch finish makes it pleasant to hold. We weren’t big fans of the plastic on the front of the device and the trim as it can be susceptible to scratches over time. 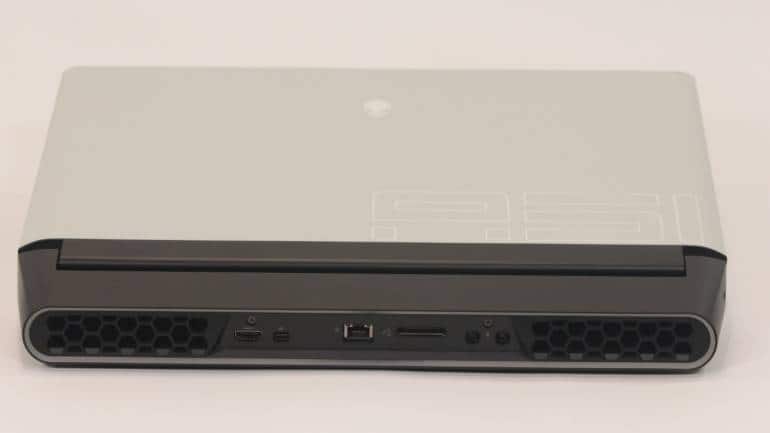 In terms of I/O, the Area-51m features all of the standard ports you’d expect to see in a gaming laptop. It features three USB-A ports, one Thunderbolt 3.0 port, the usual assortment of I/O. The one drawback is the lack of an SD card slot. At the back of the device, you’ll find two AC adapter sockets, and that’s because our review unit required two 330W charging bricks, each one weighing as much as a surface book. Between the laptop and the two charging bricks, you’re looking at over 7 kgs of gaming.

All about the RGB

The Area-51m is all about RGB lighting, and while the keyboard, touchpad and logos all feature RGB lighting, the light-up trim on the tail end of the device looks the coolest. The Dell Alienware Area-51m looks like the second coming of the Millennium Falcon with that RGB light strip at the back. All the lighting on this gaming behemoth can be controlled and customised through the Alienware Command Centre software. The Area-51m packs a full-size keyboard that spans the full width of the laptop, including a numpad and chunky square keycaps. The travel distance on the keys is pretty satisfying, and the touchpad with Windows precision drivers is pretty good. Although the keyboard on this laptop may look a bit dated, it is really good for gaming, and the switch from a mechanical keyboard to this one was effortless. Of all the keyboards of gaming laptops we’ve tried, this is the best, apart from the poor positioning of the ‘Page Up’ and ‘Page Down’ keys.

Now, let’s talk about performance. The Area-51m is by far the fastest laptop we’ve ever tested. Apart from recently launched MSI GT76 Titan, the Area-51m goes unrivalled in terms of performance. At the heart of this gaming, powerhouse sits a desktop-grade Intel Core i9-9900K processor coupled with a custom Nvidia RTX 2080 graphics card. Dell has optimised the RTX GPU inside the Area-51m to offer 10-per cent greater performance than its Max-Q variant. And, don’t forget, there’s 32GB of RAM and a PCIe M.2 SSD, which is going to make that gaming experience all the more smoother. 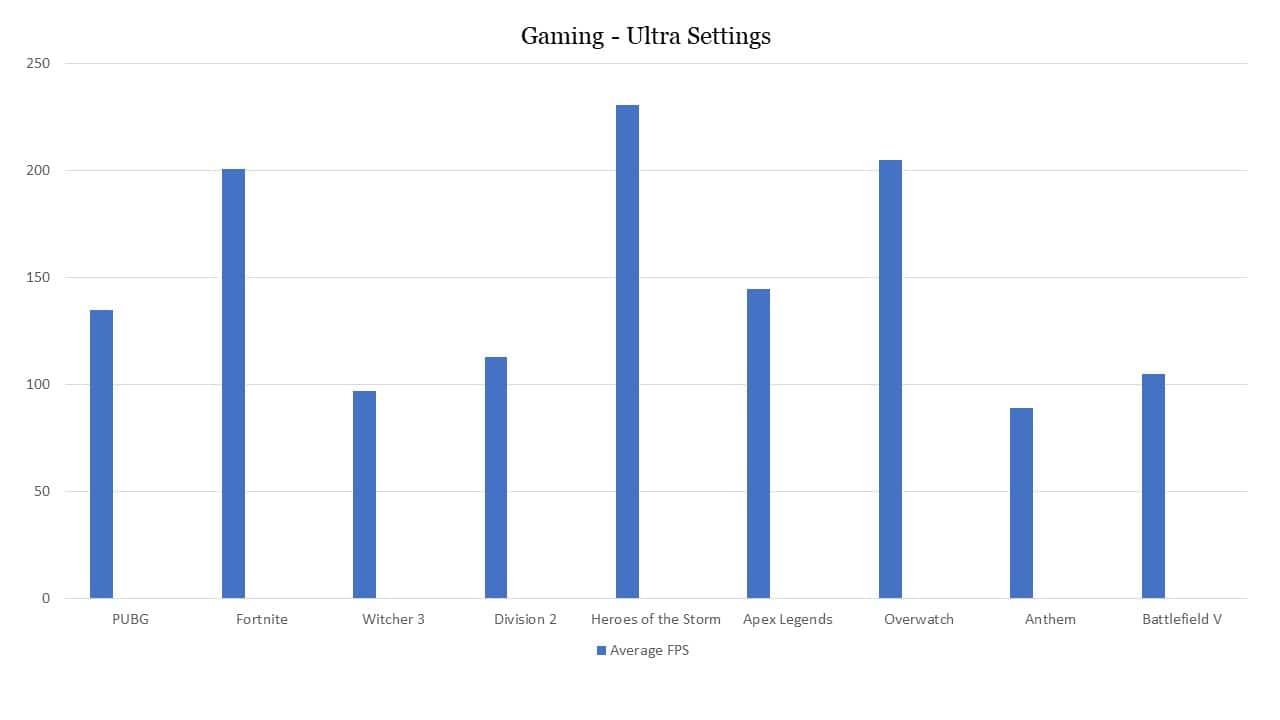 Gaming is a complete non-issue on this beast. You are guaranteed to get over-the-top performance on every game you play. We played every game on ultra-settings and received an average of above 100 fps throughout. Frame rates dropped below 100 fps while playing Anthem and Battlefield with ray tracing turned on with the latter still crossing 60 fps on average. The Alienware Area-51m delivers performance numbers that other gaming laptops would have to really work hard to get there.

In CPU tests, the Intel Core i9-9900K received a multi-core score of 1,883 in Cinebench R15 test. On 3D Mark Port Royal, the Area-51m scored 5,457. The laptop also received a single-core Geekbench score of 5,833 and a multi-core score of 32,155. Whether you want to play every game on ultra-settings or fancy video editing, the Area-51m is going to get the job done quickly and effortlessly. While this Alienware beast does deliver on performance, it can run quite hot. But Dell has taken steps to ensure the heat doesn’t really hamper your gaming experience. We found the bottom of the case getting as hot as 57 degrees Celsius. However, temperatures over the keyboard remained relatively cool. And, while the vents do get hot, they are pretty much out of reach while gaming, ensuring an optimal and convenient experience. The excellent cooling system also makes thermal throttling on the Area-51m a non-issue.

A display that works

To flesh out those sweet ultra-graphics, the Area-51m utilises a 17-inch 1080p IPS display. While screen options on the Area-51m are limited to 17-inch and 1080p, you can get the 60Hz and 144Hz refresh rates. We got the 144Hz panel with HDR and G-Sync support, which reproduces 118 per cent of the sRGB colour gamut. The Area-51m offers an average brightness of above 280 nits (285 to be precise), which is quite good for a gaming laptop. Although it would be nice to have the option of a 4K screen, whether or not the human eye can really tell the difference is another thing. The 720p webcam on the Area-51m may not be able to handle streaming – then again few can – but works really well for taking photos and video calling. Tobii’s eye-tracking tech comes bundled with the display. The Tobii eye tracking IR camera is integrated under the screen and works with over 130 games. We found the eye tracking feature as a bit of a novelty rather than a useful feature, but some professional gamers are known to use this feature.

Speakers could be better

Loud fans aren’t unusual for a gaming laptop, and the Area-51m is no exception. However, the powerful speakers on the front of the device can easily drown out the fan noise. Yes, the speakers can get pretty loud, but explosion-like sounds can cause the speakers to crackle, an issue that becomes more evident when you cross the 60-per cent volume mark.

The Area-51m uses a large 90 watt-hour battery, which unfortunately doesn’t translate into good battery life. In fact, you’re not going to want to leave the desk when working on this beast.

Add to that; the laptop is powered by two 330W chargers. But all that power only gets you under two hours of battery life. We were only able to get a little over 90 minutes of battery life for productivity work and under 30 minutes while gaming.

This didn’t come as any surprise as the components inside the Alienware are absolute power hogs, which means you're going to have to lug around over 4 kgs of laptop and little under 4 kgs of charger. The GPU, on the other hand, features a custom design, and Dell hasn’t been able to guarantee next-gen graphics cards will be retrofitted in this monster as that would depend on the GPU manufacturer (Nvidia). But Dell has promised they will definitely attempt to recreate a custom Nvidia graphics card if it is possible.  We're still not convinced about upgradeability, but that's a future issue and for the moment is it a welcome addition.

The Alienware Area-51m is an absolute beast and gives over-the-top performance a new meaning. But at over 4Kgs, this is by no means a portable gaming machine, and the extra performance does come at a pretty hefty price. 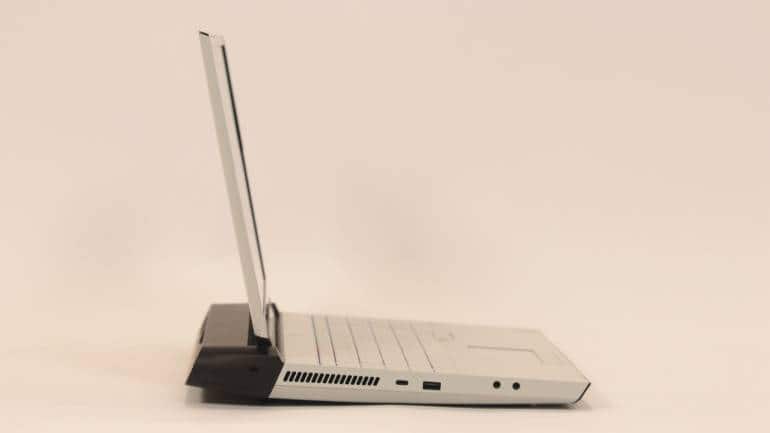