Asus ROG Phone 5 Review: Pushing the limits of performance and innovation in a smartphone

But still too much of a niche to recommend outside the hardcore mobile gamer.

Asus’ ROG Phone lineup has consistently delivered spec-sheet monstrosities, taking the over-the-top approach in almost every department. And the new ROG Phone 5 is no exception to this formula. With the ROG Phone 5, Asus brings its ‘A’ game in mobile gaming to the forefront once again. The ROG Phone 5 brings several improvements across the board. But how did these improvements translate to real-world usage, well, let’s find out?

When it comes to design and build, not much seems to have changed from past ROG Phones. While the phone has a few modifications on the back, the front is pretty much the same as its predecessor (ROG Phone 3 Review). The ROG Phone 5 Pro gets an RGB PMOLED display, while the Ultimate model has a monochrome PMOLED display. The display shows customizable graphics for scenarios like incoming calls, loading a game, charging, entering X mode and more. Our vanilla ROG Phone had the RGB ROG logo on the back. The build quality has also got an update, with Gorilla Glass Victus protection on the front and Gorilla Glass 3 on the front. The phone also features an aluminium frame, giving it a premium feel. Like previous ROG phones, the ROG 5 isn’t light and does seem to be a little on the slippery side. Thankfully, Asus has included an Aero case in the box, which maintains the futuristic aesthetic while providing an extra layer of protection. Additionally, you also get air triggers (AirTriggers 5) on the side, which are soft shoulder buttons that can be assigned various commands in games.

One of the biggest highlights of the new ROG Phone is its display, which uses a custom E4 AMOLED panel from Samsung. The phone sports a 6.78-inch (2448*1080 pixels) resolution AMOLED screen with a 20.4:9 aspect ratio. The panel has a typical brightness of 800 nits and is HDR10+ certified. It also boasts a 144Hz refresh rate and a 300Hz touch sampling rate. This is definitely one of the best displays we’ve seen on a smartphone. But that’s not all. This screen also features a 144Hz refresh rate and a 300Hz touch sampling rate with a 1ms response time and 24.3ms touch response as well as an 18ms slide latency. You can manually set the refresh rate to 60Hz, 120Hz, or 144Hz or use the auto-refresh rate option to automatically transition between the different refresh rates, thereby improving battery life, while maintaining a smooth experience.

This doesn’t seem like a major step up from the ROG Phone 3 (Review) but considering that the phone already had one of the best smartphone displays we’ve ever since, it is nice to see Asus has stepped up its game, improving on an already impressive screen.

Asus has also stepped it up on the performance front, with the addition of the new Snapdragon 888 SoC. The chipset here is paired with up to 12GB of LPDDR5 RAM and up to 256GB of UFS 3.1 storage. The ROG Phone 5 Pro steps it up with 16GB of RAM and 512GB of storage, while the Ultimate model is equipped with 18GB of RAM. To help keep things cool under pressure, there’s a new ROG GameCool 5 system that employs a new and optimised thermal structure. The ROG Phone 5 ran just about any game I could throw at it, without any comprise on graphics or frame rates. ROG Phone 5's external cooler can improve overall performance, but it isn't included in the box.

In Geekbench 5, the ROG Phone 5 scored 1117 points in the single-core test and 3699 in the multi-core test. In AnTuTu, the ROG Phone 5 managed an overall score of 708195 points. I also put the phone through a stress test, running games on it for over three hours. I started with 30 minutes of Call of Duty: Mobile and then continued with two and half hours of Raid: Shadow Legends. By the end of the session, the phone got pretty hot but performance remained consistent. 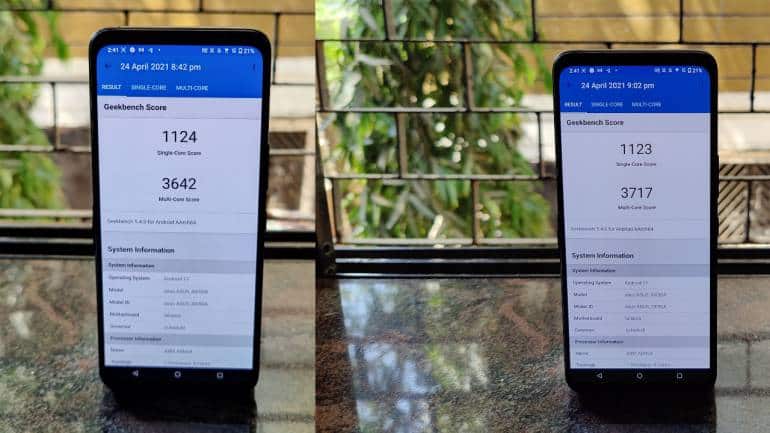 The test done on the left side shows the ROG Phone 5's performance after two straight hours of gaming, while the test on the right is taken after letting the phone cool for 20 minutes.

And while this does seem like the cooling system doing its job, the level of heat was rather uncomfortable towards the end of the session. That being said, maintaining this level of peak performance isn’t easy and the ROG Phone 5 has a massive advantage over the competition here. The 64 MP Quad-Bayer sensor captures decent photos in bright light. The shots were well represented in terms of detail with good noise reduction in daylight. However, things get a little complicated when the light dies down. The camera doesn’t perform well indoors as well. While colour saturation was decent, the dynamic range tended to fall a bit short.

In lowlight, Night mode kicks in automatically, increasing the exposure time to around four seconds. If you find yourself in a particularly darker scene, the exposure time could be bumped up. Set it up on a tripod and you’ll find yourself waiting for close to half a minute for a shot. I think the ROG Phone 5’s main Quad-Bayer sensor did surprisingly well while capturing stills in low light. 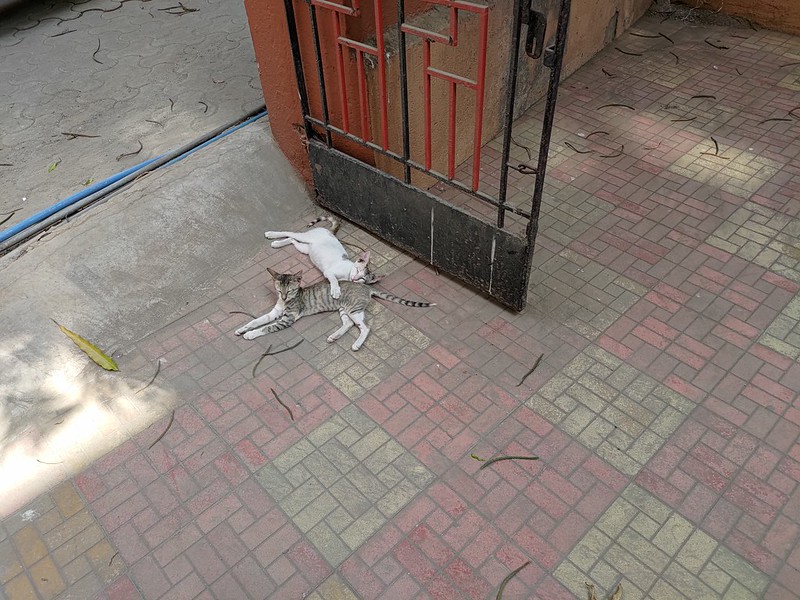 You also get a 13 MP ultrawide shooter that does a decent job in bright outdoor light. The edges on photos are visibly softer and images do tend to fall apart when pinched, especially in Night mode. The macro camera here is just about average, getting some decent results in bright outdoor light. Moving on to the front, and the 24 MP selfie camera is back without a bang. In bright light, detail, colours, and sharpness are handled quite well, while maintaining good background blur and subject separation for portraits. Lastly, the ROG Phone 5 can capture video at up to 8K resolution at 30fps. And while I was impressed with detail, dynamic range wasn’t the best. I would recommend sticking to 4K video at 60fps. The ultrawide camera can also record 4K video, but at 30fps. While the ROG Phone 5 has the best cameras of any past ROG device, it hasn’t changed a whole lot from its predecessor. Most of the tweaks here have come on the software front and I think the hardware could be better, but Night mode is solid here and there are tons of options for videos.

Another great aspect of the ROG Phone 5 is audio. The dual front-facing speakers, housed in the top bezel, are the loudest I’ve heard on a smartphone. The speakers are tuned by Dirac, a company renowned for fine-tuning audio output. Additionally, audio doesn’t seem to get distorted even on max volumes, while stereo separation does an excellent job of isolating different sounds. You also get a headphone jack and a DAC that supports hi-res audio. 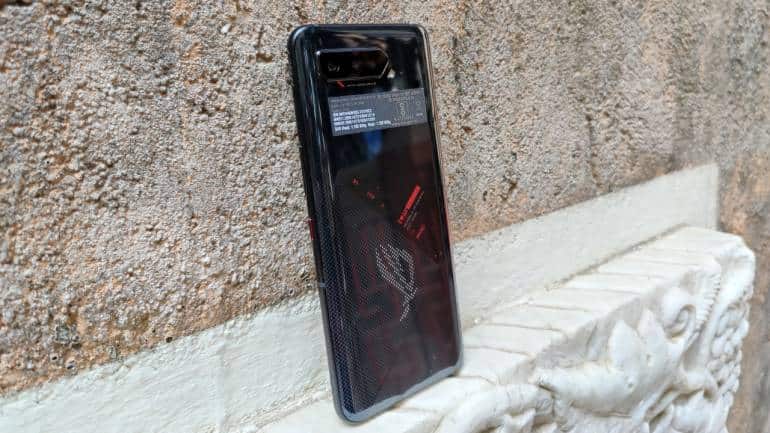 While battery capacity stays the same on the specs sheet, there are some big improvements internally compared to the ROG Phone 3. The ROG Phone 5 uses a 6,000 mAh MMT Dual cell battery. The battery can deliver up to two days of general use on a full charge, which is definitely class-leading. And this includes some casual gaming. In my testing, I managed to drain 50 percent of the battery with around four hours of continuous Raid: Shadow Legends. This will vary depending on the game you decide to play, but it is still quite an impressive number. This is primarily because the company now includes a 65W charging adapter inside the box. 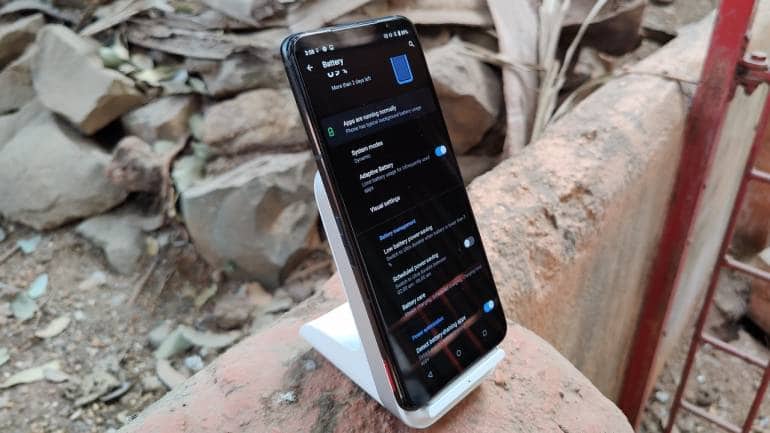 The dual-cell design is engineered for optimal charging efficiency to ensure the battery chargers faster without excessive heating. Asus claims that the battery can charge to 4,200 mAh in 30 minutes, while a full charge takes around 52 minutes. And the ROG Phone 5 can do all this while maintaining a 7-degree cooler battery temperature. Considering battery life is a key aspect of a gaming smartphone, it is nice to see that ROG Phone 5’s battery addresses both capacity and integrity.

Not much has changed on the software side, with Asus giving you the option to go with the gaming-centric ROG UI or the cleaner Zen UI. Both are based on an almost stock version of Android 11. Asus claims that the UI has been optimized for better performance and smarter functionality to improve the user experience without deviating too far from the stock Android feel. There are some new fingerprint indicators and unlock animations for the in-display scanner. Additionally, you also get animated lock screens, live wallpapers, icons, sounds, in-call animations and a customisable always-on display. 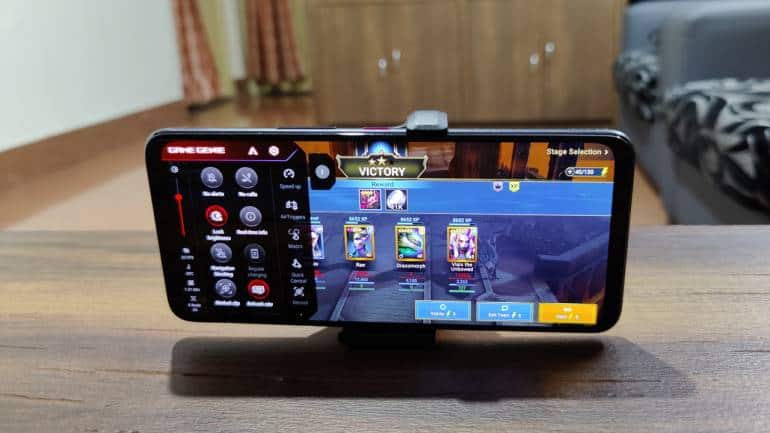 The Game Genie and Armory Crate also make a comeback on the ROG Phone 5. The Game Genie can be used for everything from boosting performance to recording macros, quickly and conveniently in the midst of battle. The Armory Crate software, on the other hand, acts as a library for all your titles, allowing you to customise and save settings for each game individually. You can also adjust the lighting on the back, map keys, view macros, and more using the software.

The ROG Phone 5 packs some powerful hardware, but we shouldn’t forget the role software plays in enhancing the overall gaming phone experience. Aero Active Cooler is included with the ROG Phone 5 Ultimate.

The Asus ROG Phone 5 continues the over-the-top legacy of its predecessor. In terms of performance, the ROG Phone 5 is second to none, the specs combined with the cooling system here ensures the phone runs fast and cool. The 144Hz display here feel top-notch and although it doesn’t get as bright as the best from Samsung, Apple, and OnePlus, it is still a very good display. When it comes to battery life, the ROG Phone 5 is the undisputed king in this department. And to make things even better, Asus has bundled a super-fast adapter in the box. Sure, the camera could definitely use some work, but that’s not to say that it is unusable. However, Asus isn’t touting this phone as some camera monster. Moreover, the results are pretty decent, even in low light. But beyond hardware, there is just so much more on offer with the software, from the clean user experience to the dedicated gaming-oriented tools like the Game Genie and Armory Crate. I don’t think the gaming experience on this phone is down to hardware alone, software plays a major role in making the ROG Phone 5 more gamer-friendly. And then there’s audio, which is pretty much the best you’re going to hear on a smartphone. 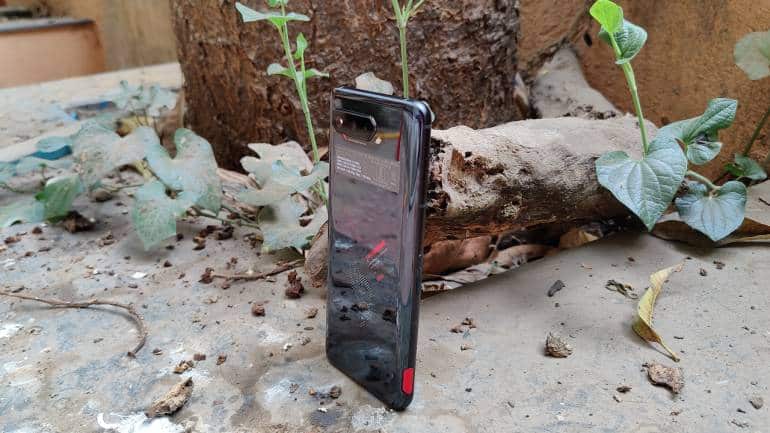 To put it simply, the ROG Phone 5 is the best smartphone for gaming, it doesn’t get any better. Asus has managed to deliver some excellent quality of life upgrades while maintaining last year’s price tag, which is quite impressive. And if you put aside the gamer aesthetic and heft, the ROG Phone 5 actually makes for a very good phone for the general user as well. On the flip side, I think the fact that this is the best gaming smartphone also works against it as Asus seems to be too hyper-focused on improving already great features rather than the places that actually could use updating.
Invite your friends and family to sign up for MC Tech 3, our daily newsletter that breaks down the biggest tech and startup stories of the day
Carlsen Martin
Tags: #Asus #gaming #smartphones
first published: Apr 25, 2021 06:40 pm