However, innovation comes at a cost!

The Asus ROG Flow X16 was recently unveiled in India. The Flow X16 is an ultra-portable gaming laptop that follows the same formula from last year’s Flow X13, albeit with a lot more firepower.

The ROG Flow X16 doesn’t compromise much in terms of its build quality. The chassis is made of a mixture of aluminium and magnesium , while the lid has a nice ribbed texture that feels smooth to the touch. The Flow X16 has a solid metal hinge design that allows you to flip the laptop 360 degrees. The laptop also has a smooth finish surrounding the keyboard with a textured finish. The textured finish also extends to the palm rest, while a ROG logo sits to the right of the trackpad. The laptop itself weighs around 4.6 pounds and measures 0.8 inches thick, giving it a rather slim and light profile. The portable design makes it easy to forget that the Flow X16 has a large 16-inch display. Additionally, the 360-degree hinge design allows you to use the Flow X16 in different orientations, including a tablet mode and a tent mode. I found using the text mode rather useful when gaming with a controller, while the Flow X16 just seemed a little too big to be a tablet. My hands couldn’t be kept out of reach of the keys on the back when using the machine in tablet mode, although Asus disables them while using the Flow X16 as a tablet. In my opinion, the ROG Flow X16 strikes the perfect balance between work and play, while its build quality is on the mark.

When it comes to ports, the Flow X16 leans more towards ultrabooks than gaming laptops. There’s an HDMI 2.0 port, a USB Type-C port with Thunderbolt 4 support, a combo audio jack, and a proprietary port for the XG Mobile GPU on the left. The laptop has two full-size USB Type-A ports and a microSD card on the right. The power button also sits on the right, while the power output is located on the left. There’s no doubt that the Flow X16 could have used another USB-C or USB-A port, but the port I missed the most here was the Ethernet output. Fortunately, if you buy the XG Mobile e-GPU, then you will have access to a ton of more ports, but it would have been nice to have an extra USB port and an Ethernet jack anyway.

The keyboard on the Flow X16 is pretty much the same that we saw on the ROG Zephyrus G15 (Review). The keyboard was excellent for gaming with a nice 1.7mm travel distance that gives you a clicky feel. The keyboard was also good for typing with adequate spacing between the keys. 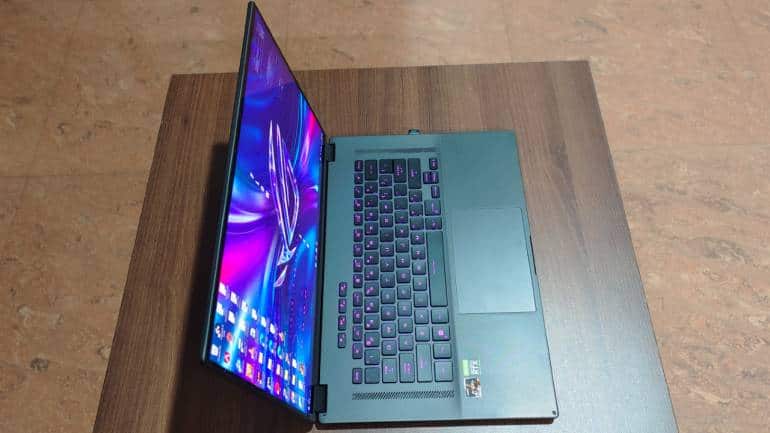 The keyboard also features a single-zone RGB backlit keyboard with different levels of brightness and preset modes. The Flow X16 comes with a fairly large trackpad that is fast and responsive. It comes with support for Windows 11 multi-touch gestures and has a rather satisfying clicking mechanism.

The Flow X16 comes with two panel options, an IPS and a Mini LED display, our model arrived in the latter of the two. The 16-inch WQXGA (2560 x 1600 pixels) Mini LED touch panel boasts a peak brightness of over 1,000 nits, which is much higher than traditional gaming laptops as well as premium ultrabooks. Asus includes a stylus in the box that is compatible with the touchscreen. The screen boasts a 165Hz refresh rate and a 3ms response time. The panel supports Adaptive-Sync and AMD’s FreeSync Premium Pro, making it extremely smooth and responsive. The display is factory calibrated by Pantone out of the box with 100 percent DCI-P3 coverage and 100 percent sRGB coverage, making it good for content creation as well. The touchscreen here boasts comfortable viewing angles and has a nice 16:10 aspect ratio. The panel also supports Dolby Vision HDR. The screen also has a layer of scratch-resistant Corning Gorilla Glass for added protection. The ROG Flow X16’s screen is the brightest I’ve seen on any laptop to date. The addition of the Mini LED panel helps the Flow X16 excel in the display department.

For a thin and light notebook, the Flow X16 has quite the speakers. There are four speakers with Dolby Atmos on the Flow X16 which deliver excellent audio quality. The audio gets considerably loud at higher volumes, while the bass is pretty decent. The sound also doesn’t tend to distort at higher volumes. You won’t have any problem using the speakers for entertainment and gaming in a mid-sized room. The Flow X16 has a 720p IR webcam that works well for video calls and also supports Windows Hello Face Unlock.

Our ROG Flow X16 model was equipped with an AMD Ryzen 9 6900HS CPU paired with 32GB of DDR5 RAM clocked at 4800MHz. The laptop also featured 1TB of M.2 PCIe 4.0 SSD storage. There are two M.2 slots and two DDR5 memory slots cramped into a pretty tight space. Lastly, the Flow X16 opts for an Nvidia GeForce RTX 3070 Ti laptop GPU for gaming. Despite its portable design, the Flow X16 packs a lot of power but how does it fare in real-world scenarios. Asus has also made some tweaks to the cooling system on the Flow X16. The laptop has a new tri-fan setup that is titled the Frost Force cooling system. There’s a new Pulsar Heatsink that redirects the airflow towards the GPU, while the CPU is cooled with liquid metal thermal paste. There are multiple vents that sit on the back and sides of the laptop, while the Armoury Crate software can also be used to monitor temperature and increase fan speeds and manage CPU and GPU temperatures.

While the cooling system ensures heat steers clear of the keyboard and trackpad area, the laptop does run hot and isn’t immune to thermal throttling. However, this is mainly down to the laptop’s size. The Flow X16 is by no means a hardcore gaming laptop but leans more towards ‘premium notebook that can game'. You’ll have to buy the ROG XG Mobile GPU to maximize the gaming potential of the Flow X16. But the Flow X16 still puts out some impressive gaming numbers given its form factor.

The ROG Flow X16 packs a large 90WHr battery that delivered up to six hours of battery life. Our test involved simultaneous use of Google Chrome and MS Word. It is worth noting that 40 percent screen brightness was maintained throughout our testing and the laptop was used in MSHybrid mode with Panel Power Saver turned on. The laptop’s battery also delivered 90 minutes of gaming. While six hours is not a great figure for premium ultrabooks, it is incredible for a gaming laptop.

If you are looking for a gaming laptop with a large screen and a portable design, then the ROG Flow X16 is definitely worth considering. The concept here is pretty interesting as the Flow X16 does a lot of things right. Asus has managed to squeeze out a lot of performance from this slim and light form factor. Additionally, the X16 is outfitted with an excellent screen, comfortable keyboard, good speakers, and solid battery life, making it reliable as a standard premium notebook as well. Lastly, the laptop also features excellent upgradeability, thanks to the XG Mobile GPU socket. The socket will allow you to connect future versions of the ROG XG Mobile e-GPU to the Flow X16. Thus, offering room for upgradability in the RAM, storage, and graphics department, is quite an impressive achievement. So if you are looking for a future-proof gaming laptop that is excellent for work as well, then the Flow X16 is perfect. However, it does come at a hefty price and it can hardly keep pace with full-fledged gaming laptops from the Zephyrus S series or the Strix series. The ROG Flow X16 is another innovative machine that is meant to tailor to a niche audience. But that doesn’t make it any less impressive.
Invite your friends and family to sign up for MC Tech 3, our daily newsletter that breaks down the biggest tech and startup stories of the day
Carlsen Martin
Tags: #AMD #Asus #Asus ROG #gaming #laptops #NVIDIA
first published: Jul 26, 2022 05:43 pm