Asus ROG Flow X13 Review: One of the most powerful 13-inch laptops and that's not even its X-Factor

When used with the ROG XG Mobile e-GPU, the Flow X13 goes from a premium ultrabook to a gaming powerhouse.

Asus’ ROG lineup of gaming laptops have always pushed the envelope on performance and innovation. The Zephyrus series aimed to deliver powerful performance in thin and light form factors, while the ROG Mothership (Review) and Zephyrus Duo (Review) brought their unique brand of innovation to the forefront. Fast-forward to 2021, and Asus has added yet another gem to the ROG line up in the form of the Flow X13.

Enter the Asus ROG Flow X13, a slim and light gaming laptop, which is designed to offer the perfect blend of power and productivity. The ROG Flow X13 can be fitted with up to an AMD Ryzen 9 5900HS CPU, an Nvidia GeForce GTX 1650 Max-Q GPU, up to 32GB of DDR4 dual-channel RAM and 1TB of M.2 NVMe SSD storage. All of which are packed into a 13-inch form factor.

And while the specs alone aren’t that impressive for a 13-inch notebook, the Flow X13 can also be paired with the 2021 ROG XG Mobile, an external mobile GPU that can be attached to the laptop to give you the power of a high-end gaming laptop. The ROG XG Mobile is available in an RTX 3070 or RTX 3080 version. Now that we’ve got that out of the way, let’s take an in-depth look at the ROG Flow X13 and find out if the powerful specs here can deliver in the real-world. 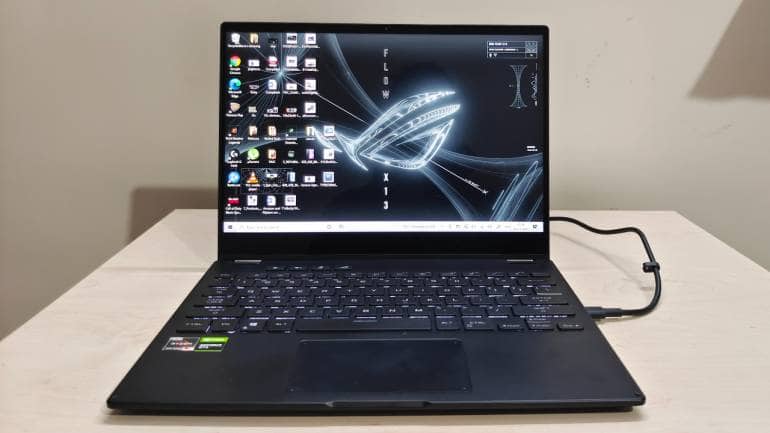 The ROG Flow X13 and XG Mobile e-GPU come with a combined weight of just 2.3 kg--the laptop weighing a meagre 1.3 kg, with 16mm thickness, which is no different from the ZenBook 13 or Dell XPS 13. In terms of build quality, there is zero compromise here; the laptop is made form a magnesium alloy, which gives it that premium finish. However, the hinges don’t feel as sturdy as other premium 13-inch notebooks'. The lid of the Flow X13 has textured diagonal lines with the ROG nameplate located on the bottom. When you open the laptop, the textured finish continues through to the bottom and is also found on the palm rest, which makes typing rather comfortable. There’s no doubt that the build quality of the Flow X13 is pretty solid, while the laptop is designed for use on the go.

The ROG Flow X13 may not be short on power, but it is undoubtedly short on ports. All you get is a single USB Type-A port and Type-C port (power delivery / DisplayPort) on the right, and a headphone jack and HDMI port on the left. And considering the Type-C port is meant for charging, the laptop could’ve definitely used another. However, the external mobile GPU has a ton of ports, including four USB 3.2 Type-A ports, an HDMI 2.0 port, a DisplayPort 1.4 with G-Sync support, and an RJ45 LAN port. You also get a DC input jack on the back and a full SD card slot on the top of the unit. Unlike the notebook, the XG Mobile GPU has a ton of ports, more than enough to connect multiple accessories for gaming or content creation.

The Flow X13 has an island-style keyboard with a white backlight. The keys have a nice travel distance offering great feedback and a rather satisfying click sound at the end. And while the key caps are on the small side, the keys are well spaced out. All of these factors combine to deliver an excellent typing experience. I used an external mechanical keyboard for the most part while gaming, although when I needed to use the laptop’s keyboard for gaming, it got the job done. 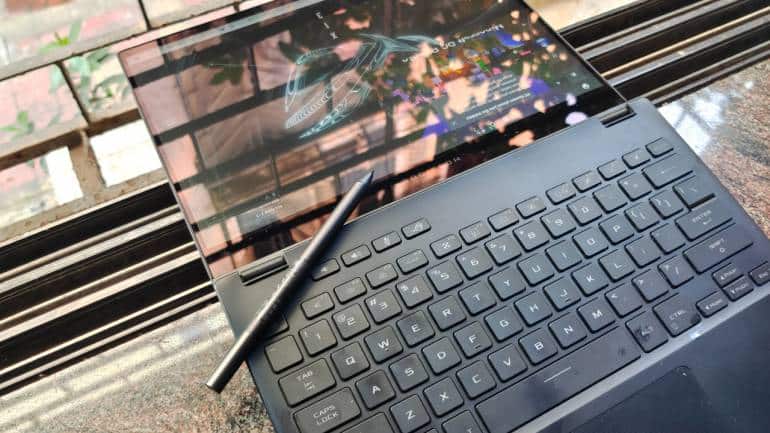 The trackpad has a smooth surface and is equipped with Windows Precision drivers. The trackpad also offers accurate tracking and Windows gesture support. I did find the trackpad rather small but it can’t be helped given the size of the notebook. Overall, the keyboard on the Flow X13 was excellent for daily use, although the trackpad isn’t the best.

The ROG Flow X13 has a 13.4-inch IPS display with a 4K (3840 x 2400 pixels) resolution. The display has a 16:10 aspect ratio and a pixel density of 338 ppi. The screen offers touch support and has a glossy finish. However, the downside is the 60Hz refresh rate, although Asus offers the Flow X13 with a 1080p panel and a higher 120Hz refresh rate. The 4K display features 100 percent sRGB coverage and 85 percent coverage of the DCI-P3 colour space. The panel comes Pantone calibrated out of the box, which is a big plus for content creators. The display also features stylus support, with one bundled in the box. The display isn’t quite as bright as compared to 4K displays on regular premium notebooks, but it easily gets the job done during indoor use. Apart from that, the screen was excellent for watching movies and videos. However, you’ll have a tough time gaming on the 13.4-inch screen. Considering the laptop isn’t specifically designed for gaming, it makes more sense here to go with the 4K display rather than the high refresh rate panel if you are a creator/gamer. I often defaulted to my external monitor when gaming on the Flow X13 to take advantage of the high frame rates this machine can pump out. The ROG Flow X13 and the XG Mobile e-GPU are designed to be used with an external display. The e-GPU can support a 1440p display with up to a 240Hz refresh rate or a 4K screen up to 120Hz. Additionally, pairing the GPU with a G-Sync compatible monitor matches the display’s refresh rate with the GPU delivering a smoother gaming experience.

The ROG Flow X13 doesn’t hold back when it comes to the specs. Our unit arrived with an AMD Ryzen 9 5900HS CPU with 8 cores and offering a max clock speed of 4.5GHz. The CPU is paired with an Nvidia GeForce GTX 1650 Max-Q GPU. Other CPU options include a Ryzen 7 5800HS and Ryzen 9 5980HS, while Asus also offers an Nvidia RTX 3050 Ti GPU option abroad. The notebook also comes with 16GB of soldered dual-channel LPDDR4X RAM and 1TB of NVMe PCIe Gen 3 SSD for storage. Moving on to gaming, the Flow X13’s GTX 1650 Max-Q can deliver sufficient power for some casual gaming, but the real star of the show here is the ROG XG Mobile e-GPU (RTX 3080). When paired with the e-GPU, the Flow X13 delivered an average of around 140fps in Call of Duty: Black Ops Cold War on high settings. The laptop also consistently delivered upwards of 150fps in Apex Legends with the settings maxed out. I also tried a bit of Valorant on high settings, getting around 250fps on average.

AAA tiles also performed really well thanks to the XG Mobile e-GPU. The laptop delivered around 100 fps on average in Shadow of the Tomb Raider with the settings cranked up to the max. Lastly, Battlefield V in campaign mode hit around 130fps on average on Ultra settings. I have to see that these were some of the best numbers we’ve seen on a gaming laptop. I also tested a few titles on the GTX 1650 Max-Q GPU. Apex Legends managed to deliver between 50 and 60 fps, while Battlefield V and Shadow of the Tomb Raider struggled to hit 50fps on high settings.

The ROG Flow X13 comes with Asus’ ROG Intelligent cooling system that includes components like Arc Blade fans with 84 blades, a combination of heat pipes and heat sinks, Thermal Grizzly liquid metal instead of regular thermal paste, and a self-cleaning thermal module. It is worth noting that you can push the CPU from a 35W TDP to a 45 TDP manually in Asus’ Armory Crate software, although this amps up the heat and causes the CPU to throttle.

However, this is a 2-in-1 laptop, so if you are gaming on an external monitor, we’d recommend using the laptop in tent mode or with the bottom of the laptop facing upward. This ensures better air flow and faster performance. Additionally, with the e-GPU connected the Flow X13 tends to run cooler as all the load is taken off the dedicated GTX 1650. The XG Mobile unit also has its own cooling system, which keeps temperatures under control even during long hours of gaming. In terms of performance, the ROG Flow X13 can certainly keep pace with some of the very best gaming laptops around. While the dedicated GTX 1650 Max-Q GPU isn’t the best in the business, the CPU performance and e-GPU performance easily matches and in certain cases exceeds that of full-fat 15.6-inch gaming laptops. The cooling has also been optimised to ensure thermal throttling is a non-issue while gaming. Even the dedicated GTX 1650 Max-Q has its benefits and can be quite effective when you don’t have the external GPU.

Asus’ ROG Flow X13 packs a 62Whr battery that can deliver up to 5 hours of battery life, which is around half of the advertised 10 hours. However, it shouldn’t come as a surprise considering we are working with an 8-core CPU, a 4K display, and a dedicated graphics card in an ultraportable 13-inch form factor. I’d recommend switching to 1080p resolution if you want to pump out a little more battery life out the laptop’s battery. Battery life is nothing to write home about on the ROG Flow X13, but that was expected considering the specs. The audio on the ROG Flow X13 is handled with two bottom firing speakers and a smart amplifier. While I still defaulted to using a headset while gaming, the speakers on the Flow X13 were surprisingly loud for a 13-inch notebook. The speakers lack that thumping bass but still produce rich sounds with solid instrument separation. As for the 720p webcam, it is well-above average and does an excellent job for video calls. 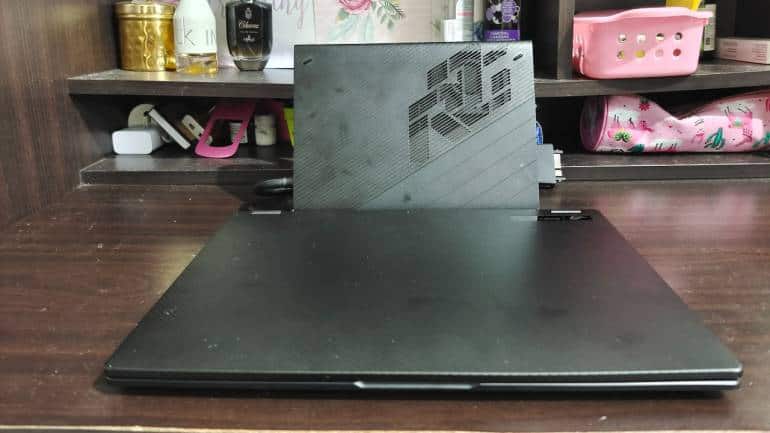 There’s no doubt that the concept here is undeniably innovative and executed to perfection. The slim and light form factor ensures portability and convenience, while the dedicated GPU gives you just about enough power to run editing apps. Then there’s the mobile e-GPU, which doesn’t quite offer the performance of a desktop-grade e-GPU, but can run just about any game at 60fps and more in 1440p while maintaining a light footprint. And let’s not forget about CPU performance, which is nothing short of class leading.

But this isn’t to say that the laptop is without its flaws. The laptop lacks a second USB Type-C port, battery life is average at best and underwhelming for an ultrabook, and display options are limited to a 1080p and 4K panel even though 1440p seems like the magic number considering the specs. However, if you are in the market for a 13-inch ultrabook, ditching the premium Windows laptops and going for the ROG Flow X13 might not be such a bad idea. Because unlike regular ultrabooks, the ROG Flow X13 can transform into a gaming powerhouse with the flip of a switch. The only downside to that being the hefty price that comes with flipping that switch.