The new Zephyrus G15 leverages the best AMD and Nvidia have to offer to deliver one of the top machines in this segment.

The Asus ROG Zephyrus series has been synonymous with well-designed gaming notebooks that offer enough power for competitive gamers while maintaining a relatively slim form factor.

When it comes to design, the G15 takes its cues from the G14. Asus has not gone over the top with the gaming aesthetics; the laptop looks quite professional but it isn’t without some gamer-oriented design elements.  The lid features a Dot Matrix design with well-placed perforations across the surface. It also has Republic of Gamers engraved in a silver strip on the bottom corner of the lid. 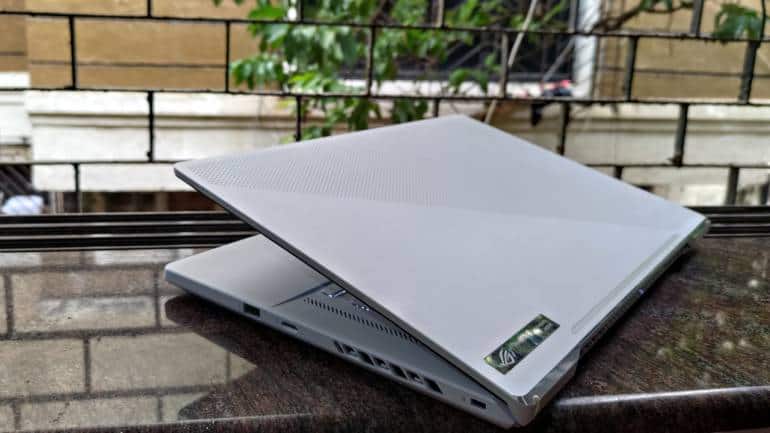 The Zephyrus G15 measures 19.9mm thick and weighs around 1.9 kg, which isn’t the lightest or thinnest around but is still good for a gaming machine. The chassis itself is made of magnesium and aluminium and felt quite premium. The new G15 also retains the Ergolift hinge design that slightly elevates the body once the laptop is opened. I like the minimalist design approach Asus has taken with the G15 (2021), it doesn’t go over-the-top, while still maintaining some aesthetics of a gaming laptop.

The keyboard on the G15 is perfect for both work and play. It is excellent to game on with a 1.7mm key travel distance that offers a nice clicky feel which works well for typing as well. The keyboard is backlit, but it is a standard white backlight, there’s no RGB here. Asus has definitely taken the subtle approach here. The power button also doubles as a fingerprint reader, while you also get some media buttons on the top of the function keys. Unfortunately, the keyboard does lose out on the Numpad, but I use a Tenkeyless every day so I had little issues with the absence of a Numpad. The laptop has a much larger trackpad, which had a smooth glass surface. It was quite responsive and despite its size, I had no problems with palm rejection. The one issue I did have with the trackpad was getting used to the left and right clicks, but you should get used to it over time. Overall, the keyboard and trackpad work quite well for work, while the former is well-built to offer little compromise when gaming.

The Zephyrus G15 has a decent assortment of ports with two USB Type-A ports, two USB Type-C ports, an RJ45 port, an audio jack, an HDMI 2.0 output, a microSD card reader, and a Kensington lock slot. Additionally, the two USB Type-C ports are equipped with DisplayPort and100W of power delivery support. In most cases, the ports were more than sufficient, although I did have to unplug my mousepad whenever I used the external webcam.

Another highlight of the new G15 is its Quad HD display. The laptop boasts a 15.6-inch IPS panel with a 165Hz refresh rate and a 3ms response time. The screen also boasts a 16:9 aspect ratio and100-percent of DCI-P3. It is Pantone Validated and comes factory calibrated out of the box. The addition of a high-refresh-rate 1440p display was an excellent move as the panel is noticeably better than your average 1080p screen. Watching videos was a delight on the G15, with accurate colours, respectable viewing angles, and good contrast levels. Additionally, brightness levels were pretty solid for a gaming laptop. Asus also offers the laptop with a Full HD display option and a 240Hz refresh rate for the more competitive gamer. However, I’d recommend the 1440p panel as the 165Hz refresh rate was more than sufficient, even for competitive gaming, and you have the benefit of a much better display for watching videos, editing photos, or indulging in immersive single-player titles.

Thin as it may be, the new G15 makes little concessions when it comes to performance. The laptop is powered by an eight-core AMD Ryzen 9 5900HS CPU paired with 16GB of RAM. You also get 1TB of M.2 PICe SSD storage with blazing-fast transfer speeds. Last but not least, the G15 (2021) packs an Nvidia RTX 3060 laptop GPU. But let’s see how does this powerful hardware fares in terms of real-world usage. For the most part, the Zephyrus G15 (2021) can deliver 60fps gaming in 1440p resolution. Among the titles that passed this test were Call of Duty: Black Ops Cold War, Battlefield V, Apex Legends, Rise of the Tomb Raider, and GTA V. However, the RTX 3060 isn’t quite meant for 1440p gaming and you’d better off dialing back the resolution to 1080p for competitive multiplayer gaming.

In 1080p resolution, Apex Legends averaged at around 140fps, while Overwatch on Ultra settings pushed the frame rates even higher, reaching 160 fps. Rise of the Tomb Raider managed around 80fps on average, while GTA V hit around 140 fps. The latest Call of Duty delivered around 100 fps on high settings in 1080p resolution, while Battlefield V delivered 80 to 90fps on average. When it comes to competitive gaming, I’d suggest reducing the resolution to 1080p and turning off Nvidia’s DLSS and Ray Tracing to get more frame rates to match the high-refresh-rate panel. When switching to AAA titles on single-player, where high frame rates aren’t so important, you can crank all the settings up and get playable frame rates. 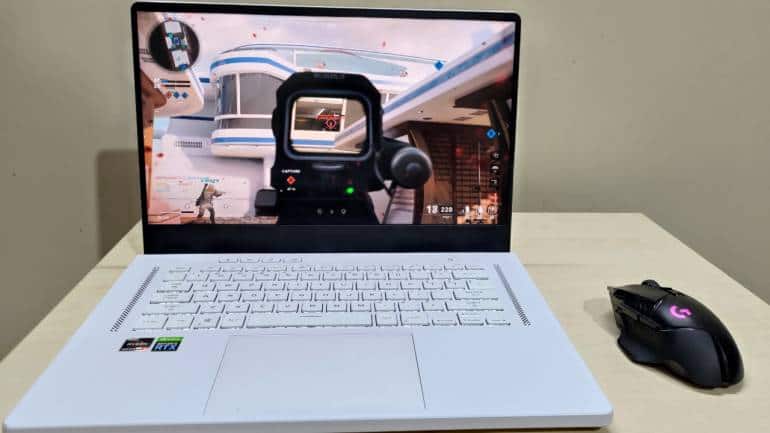 Asus has outfitted the new G15 with an ‘intelligent cooling’ system that consists of six heat pipes and two fans with 84 blades each. Additionally, you also get vents on the back and side of the notebook to ensure optimal heat dissipation. In my time gaming with the machine, I saw CPU temperature go up to 95 degrees and GPU temperature hit the high 80s. However, these were upper limits, the CPU did average between 75 and 85 degrees, while the GPU temperatures consistently remained under 80 degrees. Thermal throttling on both the CPU and GPU side were kept in check, delivering solid performance throughout long hours of gaming, which for me was around three straight hours. For the most part, the heat doesn’t reach any areas where it may be inconvenient to you. However, I had the ‘Push-to-talk’ button in Call of Duty to ‘T’ and the key got quite hot. Overall, I have to say that this laptop delivers on its promise of performance. The cooling system can easily handle the heat coming out of the hardware on our model.

The new G15 packs a 90Whr battery that draws power from a 200W power brick, although you can charge the laptop via using a USB Type-C port with up to 100W of power draw. Battery life on the new Zephyrus G15 was quite impressive, delivering up to six to seven hours of multitasking between Google Chrome and MS Word. I used Asus’ Silent profile while testing battery life, which does bring the brightness down to around 200 nits. However, the results were remarkable. I would say that the battery on the G15 borders on ultrabook levels. As is with most laptops, you won’t get much mileage out of the laptop when gaming on it. I got a little over an hour in Battlefield and graphics did take a hit.

The Zephyrus G15 packs six speakers - two front-firing tweeters and force-cancelling woofers under the palm rest. The speakers are powered by Dolby Atmos for better audio quality. The speakers deliver crisp and balanced sound across the board with very useful preloaded equalizer presets for gaming, movies, and music. And while the audio does sound good, it doesn’t get too loud, especially if you have a fan in the same room. 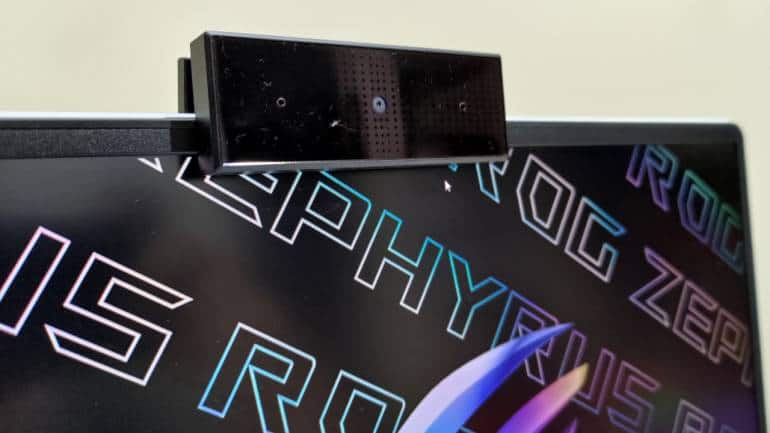 As is the case with most Zephyrus laptops, there is no webcam on the top. However, Asus does include one in the box. The external webcam is quite solid and offers up to 1080p resolution at 60fps. It isn’t the best webcam but it is certainly passable for streaming content, which already puts it miles ahead of any integrated webcam. However, using it does take up one of the two full-size USB ports, which was rather inconvenient.

At a starting price of Rs 1,36,90 (Via Croma), the Asus ROG Zephyrus G15 (2021) doesn’t come cheap. But so is building a PC in 2021, especially with those inflated GPU prices. And if you are fed up with waiting and don’t mind going all-in on a gaming laptop, you simply cannot go wrong with the new G15. From the aesthetics to the performance, this laptop doesn’t fail to impress. And beyond the powerful gaming experience, the new G15 can also deliver enough battery life to handle everyday productivity tasks. Even the build quality is quite solid with good materials and a comfortable keyboard and trackpad. I did have issues with the laptop getting too hot in some areas, but most of them were beyond my reach while gaming, so not much to complain about there. Additionally, the lack of a webcam is offset by the external webcam added in the box, which is significantly better anyway. So, should you buy this laptop, well, the answer is a simple ‘yes'. It is an absolute no-brainer. I’d say that the Zephyrus G15 (2021) might just be a contender for the best mid-range gaming laptop of the year. Lastly, I would recommend going with the RTX 3060 model as I don’t know how well the cooling system will handle a more powerful GPU.
Invite your friends and family to sign up for MC Tech 3, our daily newsletter that breaks down the biggest tech and startup stories of the day
Carlsen Martin
Tags: #AMD #Asus #gaming #laptops #NVIDIA
first published: Sep 10, 2021 07:04 pm