Investor wealth saw an erosion of over Rs 6 lakh crore on the BSE in the past seven trading session dragged down by massive selling in the stock market where the S&P BSE Sensex tumbled by as much as 1,340 points.

Indian market made an intermediate top last Tuesday when Nifty made a record high of 10,178 and Sensex touched 32,500 but since then benchmark indices have lost more than 4 percent each in a matter of just 7 days.

Investor wealth saw an erosion of over Rs 6 lakh crore on the BSE in the past seven trading session dragged down by massive selling in the stock market where the S&P BSE Sensex tumbled by as much as 1,340 points.

“I think not only rising tension between the US and North Korea dragged down the market but also, weakness in Indian Rupee (slumped to near six months low due to foreign fund outflows on concerns of fiscal deficit), rising crude price which jumped near two-year high, coupled with geopolitical concerns and US Federal Reserve’s plan to reduce its balance sheet bothered investors,” Sanjeev Jain, AVP - Equity Research at Ashika Stock Broking Ltd told Moneycontrol.

As many as 20 stocks from the S&P BSE 500 index slipped up to 30 percent from 8th September when breakout happened and Nifty touched a record high of 10,178. 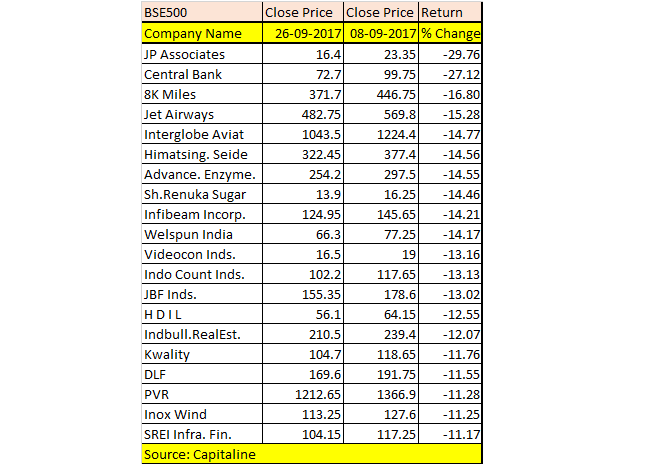 The fall was broad-based as most small and midcap index witnessed massive fall of up to 30 percent in the same period. Investors are advised to tread with caution and not every stock which corrected is a good buy.

High beta names in the mid & smallcap stocks faced the brunt of massive selling by foreign institutional investors which have offloaded over Rs 17000 crores in Indian equity markets as per provisional figures.

The domestic institutional investors kept the slide in equity markets under check as they bought nearly Rs 14000 crores in the same period.

“From last seven consecutive trading session, midcap and smallcap indices fallen by 5.6% and 6.2% respectively. There are a number of good midcap companies, which have also fallen with the flow,” said Jain.

He further added that investors may take this laggard as an opportunity to invest for long term. The companies which sound fundamental and future prospect looks bright may be a pick at these levels.