Upcoming Event:\Option Writing Masterclass by Shubham Agarwal: a session power packed with lots of intelligence and tactics required to sell write options, on 13th July at 5pm. Register Now
you are here: HomeNewsBusinessStocks

Among the sectors, the IT index was down a percent dragged by HCL Technologies which shed 2 percent followed by Infosys, Tata Consultancy Services and Tech Mahindra.

Among the sectors, the IT index was down a percent dragged by HCL Technologies which shed 2 percent followed by Infosys, Tata Consultancy Services and Tech Mahindra.

Mazhar Mohammad, Chief Strategist – Technical Research & Trading Advisory, Chartviewindia.in is of the view that fresh buying in HCL Technologies should be preferred only on correction towards Rs 650. Despite new lifetime highs price action of the last session appears to be hinting at weakening momentum after the rally from the lows of 640 in just 3 trading sessions.

Hence, in the next trading session, unless it registers a strong close above Rs 715 levels profit booking is advisable, for the short term traders, though weakness will be confirmed on a close below Rs 695 levels. As long as it sustains above Rs 695, the trend can be sideways with a positive bias and in that scenario eventually, a higher target of Rs 780 can be expected, he added. 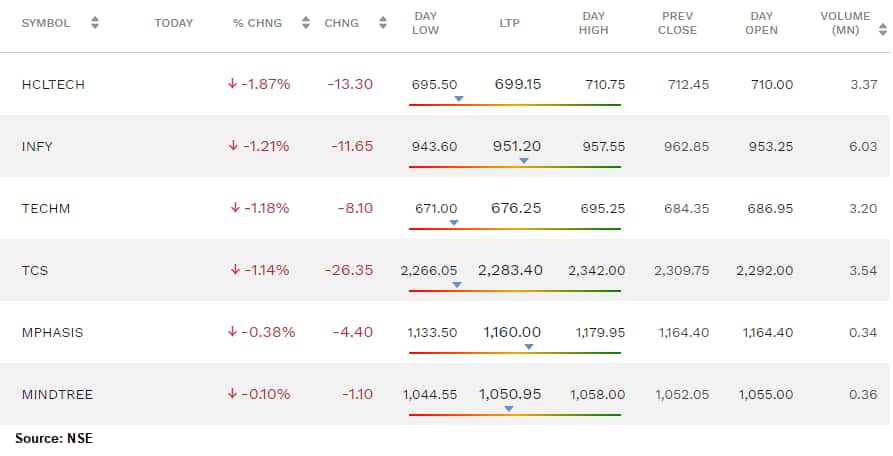 Shares of Tech Mahindra traded lower. The company's consolidated net profit increased by 20.9 percent sequentially to Rs 972.3 crore in June quarter 2020, aided by higher other income and low base in the previous quarter.

JPMorgan has an overweight rating on the stock and has raised target to Rs 740 from Rs 680 per share. The company beat low Q1 expectations across all the metrics, while deal wins were softer than peers as several cyclical headwinds are behind, it added.

Among the S&P BSE IT, shares of Kellton Tech was down 5 percent while Tanla Solutions, Mindtree, Hexaware Tech, Cyient, Datamatics Global and 63 Moons Tech were the other losers.

Pritesh Mehta, Lead Technical Analyst - Institutional Equities at YES Securities is of the view that with the theme of sector rotation likely to be intact, booking profits after a series of sharp upticks appears to be the right strategy in IT stocks.

Disclaimer: The views and investment tips expressed by investment expert on Moneycontrol.com are his own and not that of the website or its management. Moneycontrol.com advises users to check with certified experts before taking any investment decisions.
Sandip Das
Tags: #Buzzing Stocks
first published: Jul 29, 2020 11:55 am