SEBI investigations into serious violations of market rules pile up

SEBI probes on major violations of market regulations that can lead to severe penalties like suspension of trading are increasingly taking more than two years to complete although the total number of pending investigations has declined.

The Securities and Exchange Board of India aims to complete all probes in a time-bound manner but there are instances when it is able to act against only after a few years as the exponential expansion of the capital market and entry of many new players has multiplied its workload. Litigation has also caused delays. 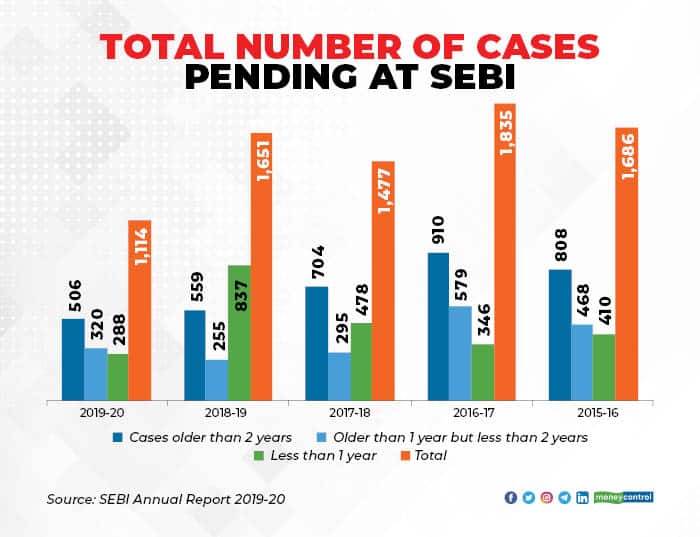 The latest data from SEBI shows that out of 1,114 pending investigations and enquiries it initiated, 506, or 45.4 percent have been pending for more than two years. These cases pertain to enforcement actions initiated by the regulator including adjudication proceedings, enquiry proceedings and those under Section 11, 11B and 11D of the SEBI Act.

The last category of cases – those initiated under Section 11, 11B and 11D of the SEBI Act – assumes significance as these clauses empower SEBI to bar entities from the securities market, suspend trading in the shares of a company or impose a monetary penalty for violating capital market regulations. 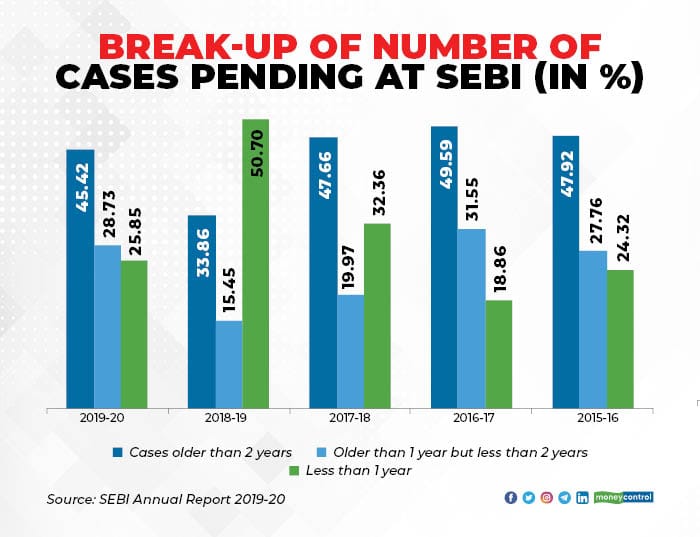 This category has the largest share of matters wherein the investigation seems to be in the slow lane.

Among all the pending cases initiated under Section 11, 11B and 11D of the SEBI Act, as many as 63% were older than two years as on March 31, 2020. More importantly, the share of such pending cases in this category has risen steadily rise over the years. To be fair, the overall share of pending cases that are older than two years has dipped slightly when compared to some of the earlier years though it is still higher when compared to 2018-19 when it was nearly 34%.

Legal experts say investigations under Section 11, 11B and 11D of the SEBI Act typically take a longer time to be completed since, more often than not, it involves a group of entities facing serious allegations like insider trading or fraudulent activities.

“The scope of 11/11B proceedings is wider than only monetary penalties under Adjudication Proceedings. This is specially in the context of rise in forensic audits and increasing securities fraud cases,” added Agrawal. SEBI’s mandate includes regulating a wide array of entities including stock exchanges, mutual funds, listed companies, brokerages, merchant bankers, investment advisors and even individuals trading in the capital markets. This, in turn, leads to a high number of investigations and probes.

“There have been certain batch matters recently, which involve a large number of entities against whom action is to be taken,” said Manshoor Nazki, Partner, Induslaw, referring to the probes done under Section 11, 11B and 11D of the SEBI Act.

“SAT has, in a few cases, said that the powers under section 11/11B should be sparingly used by SEBI. However, that hasn't always deterred SEBI from using these provisions whenever the need arises. SEBI has also amended its fraudulent and unfair trade practices regulations to increase its reach, which has also resulted in an increase in enforcement actions,” added Nazki, who has earlier worked as a law officer at SEBI. 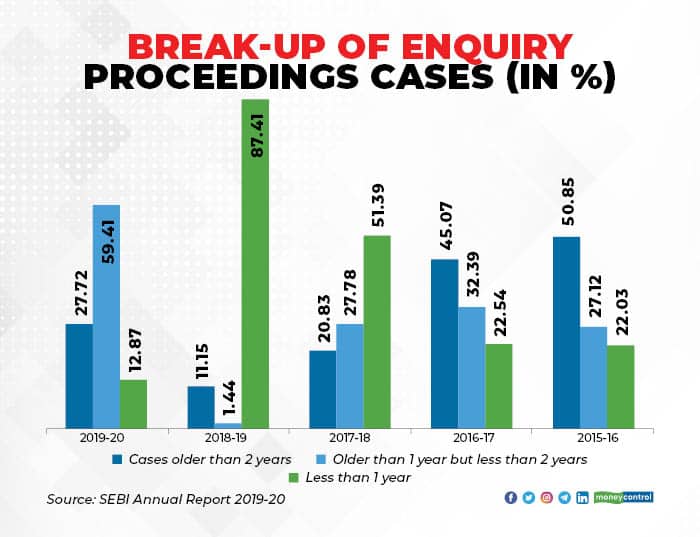 Interestingly, the categories of adjudication proceedings and enquiry proceedings, which could lead to actions like suspension or cancellation of the registration of a market intermediary or a monetary penalty for violating the regulatory framework have seen quick disposals as the share of cases older than two years falling significantly.