Q2 report: As IT companies get back their hiring mojo, it's good news for both students and experienced

Headcount in top four IT firms – TCS, Infosys, Wipro and HCL Tech – increased by 17,079 in September 2020 quarter. These were a mixture of freshers and laterals. The number declined by 9,000 in Q1.

India's IT industry, among the country's biggest employers, seems to have bounced back. Demand is getting back to pre-Covid-19 levels and top names in the sector have stepped up hiring.

The top four IT firms hired 17,000 in the second quarter after a net decline of 9,000 in the first. Also, a robust hiring plan in place for the December and March quarters, IT executives said.

This is important, given that IT is one of the largest employers in the country, especially in engineering colleges. Continued contraction would have impacted job opportunities for fresh engineering graduates, where IT firms are major job providers.

The hiring numbers are less than those for the September 2019 quarter, when the headcount increase was 31, 380. However, considering the uncertainty around the pandemic and the decline witnessed in Q1, hiring outlook for the coming quarters is positive based on company commentary.

Headcount in top four IT firms – TCS, Infosys, Wipro and HCL Tech – increased by 17,079 in the September 2020 quarter. These were a mixture of freshers and laterals. 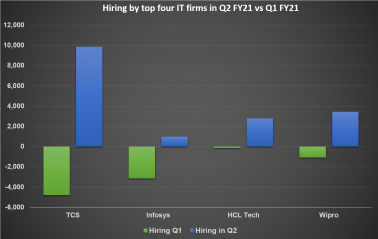 There are primarily three key reasons for the increase:

In an earnings call on October 13, Wipro's COO, BM Bhanumurthy said demand has gone back to pre-COVID-19 levels and the company’s deal pipeline is a mixture of large and small deals. Wipro does not share the total contract value (TCV) of deals signed.

The company also reinstated its revenue guidance. Thierry Delaporte, CEO, said in the earnings call that Wipro is well-positioned to win large deals going forward as it is becoming more relevant for its clients.

This is what has reflected in the revenue guidance of 1.5-3.5 percent for the December quarter. Wipro did not share guidance in Q1 on account of lack of visibility due to the pandemic.

“…in July, it was a particular context of crisis (that was) just unfolding. We were trying to understand the implications and it was difficult to get the visibility. So we felt that it was probably better not to give guidance in this context,” Delaporte said.

HCL Tech’s deal wins increased 35 percent compared to the previous quarter. TCS signed close to $8.6 billion in deals from $6.9 billion in Q1, while Infosys got $3.15 billion for the quarter, from $1.74 billion in Q1. Infosys also increased its revenue guidance from 0-2 percent in Q1 to 2-3 percent in Q2.

This recovery in demand is expected to reflect in increased hiring and fresher on-boarding in December and March quarters.

Fresher on-boarding that began in the first quarter was deferred to July on account of the pandemic. The final year exams were postponed and companies could not finish their hiring on campuses.

HCL Tech's chief human resources officer VV Apparao, in an earnings call on October 16 after the announcement of the Q2 results, said, “We were unable to recruit in many universities and colleges because they (students) had not finished their final exams. So, they are not yet qualified to join us though we have given them offers,” he explained.

The company’s hiring cycle is from January to May, and was impacted due to COVID-19.

This will change from the next quarter. “The reason for confidence for the next two quarters is that we have already made offers to a lot of students. It is a question of them finishing their final year and joining us,” he added.

Other companies, too, have robust hiring plans in place. UB Pravin Rao, COO, Infosys, said the company has already started hiring freshers  for next year  and will recruit 15,000 from campuses, he said. For this year, the company hired about 16,500 freshers.