A mistake repeated more than once is a choice. Policymakers have to decide whether they can keep repeating the past or is it time to choose big bold reforms to save the power sector and taxpayers’ money.

Almost two decades ago, India introduced the landmark legislation that governs the power sector – the Electricity Act, 2003. In these two decades, India has achieved a lot in terms of meeting the electricity needs of its citizens and businesses. From a meagre 90 gigawatts (GW), the current capacity stands close to 400 GW with a sizable share contributed by renewable energy resources. All-India system peak demand has crossed 210 GW and government statistics show that all villages been electrified.

But despite these staggering numbers and achievements, all is not well with the power sector. The country faces a recurring power crisis and players across the value chain will tell you that a lot of the sector’s woes can be traced to the power distribution sector. It is an area that has been under constant stress and cause of worry for governments as well as investors. Power distribution companies (discoms), primarily run by state governments, have a long history of non-payment of dues and financial stress that cripples the sector. On May 25, the Ministry of Power notified that it is working on a scheme to liquidate the past dues of discoms to provide relief to the entire value chain in the power sector which has been reeling under the pressure of non-payments. But power sector players are skeptical. This is not the first time the government has announced such a scheme; in fact, this is the second such scheme in two years. 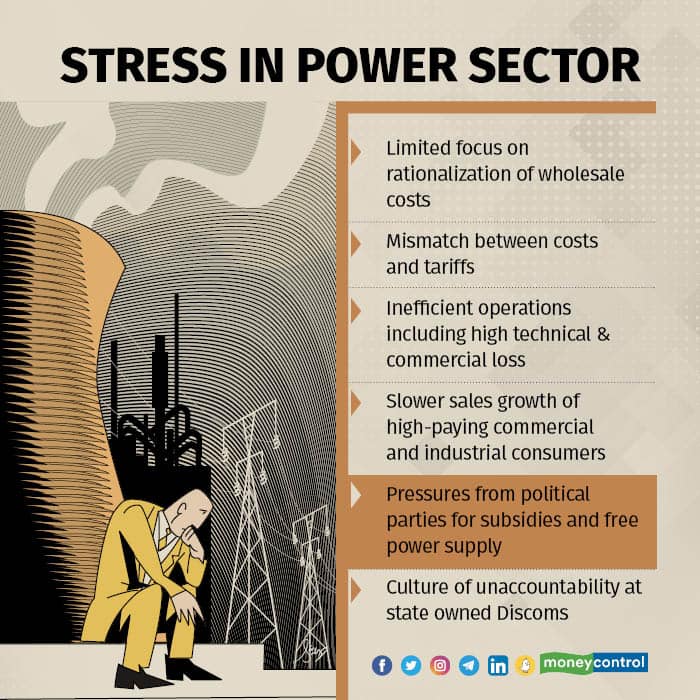 This story, a part of Moneycontrol’s special series the Power Shock, we will look at the history of the efforts by the government to turn around distribution companies. We also look at the impact of these efforts and what more needs to be done.

The discoms seem to have been in the red since ad infinitum. Consider this, for instance. Way back in 1999, the erstwhile State Electricity Boards (integrated utilities with functional departments for generation, transmission, distribution) had a total book loss amounting to Rs 250 billion and a payment outstanding to power generators of Rs 400 billion.

That is when the now famously known Montek Bonds were introduced.

Under the chairmanship of Dr. Montek Singh Ahluwali, an Expert Group in 2001 recommended haircuts and a bailout as the only solution to save the power sector. A one-time settlement of state electricity board dues was agreed. This involved Central Public Sector Undertakings (CPSUs) agreeing on a 50 percent surcharge waiver for an amount adding up to Rs 78 billion. Plus, the balance dues liability to be taken over by the state governments. This amounted to Rs 350 billion to be funded as tax-free bonds issued by state governments at an interest rate of 8.5 percent for a tenure of 15 years. Further there was an agreement on performance-based reforms that would lead to operational and financial turnaround of the sector.

An additional layer of central financial assistance was declared under the original Accelerated Power Development Reforms Programme (APDRP) in 2002. The idea was to support system strengthening of discoms so that losses – technical as well as commercial – can be controlled.

Later in 2008, a revamped version of it was introduced under the name R-APDRP. The focus of this new scheme was on a select 30,000 towns and cities. Emphasis was placed on use of technology and information technology (IT)-enabled solutions to bring the Aggregate Technical & Commercial (AT&C) loss levels down to 15%. Yet, discom finances deteriorated in the years since. A decade later, in 2012, the book losses reached an all-time high of Rs 726 billion. According to a World Bank study, accumulated losses grew at a compound annual growth rate of 9 percent in 2002-2012.

A national level grid failure in August 2012 led to one more bailout being offered, of course with linkages to performance-based incentives.

Based on recommendations of an expert group lead by B K Chaturvedi of the Planning Commission, a Financial Restructuring Package (FRP) was offered. Under the package, it was decided that 50% of the discoms liabilities will be taken over by respective state governments.

The result? Instead of a financial turnaround, the outstanding debt of discoms almost doubled between FY12 and  FY15, that is in just a three-year time frame!

And the cycle has continued. Yet another brand-new bailout scheme was introduced in the form of UDAY (Ujwal Discom Assurance Yojana) in November 2015. This scheme envisaged state governments taking over 75% of discoms debt, and interest rate reduction for the balance 25% of debt by way of state government-backed bonds.

Much has already been said about the hits and misses of UDAY. Although it is quite evident that we are still far away from the illusionary end point of discoms being financially stable.

Old wine in a new bottle

One may conclude that every few years the narrative of state-discoms financial unviability and therefore inability to pay generators, thereby risking the whole power sector, is presented as a context to introduce a ‘new settlement scheme’ – which in other words is nothing but a bailout.

According to Vinayak Chatterjee, Chairman of the Confederation of Indian Industry's (CII) National Task Force on Infrastructure Projects, “From the Montek Bonds in 2002, to FRP in 2011, to UDAY in 2015, a lot has been spent with limited success on ground. Financial re-engineering alone will not lead us anywhere.”

The 2001 Expert Group had rightly predicted that unless the existing systemic problems are addressed overdues would mount again. That is precisely what happened.

Over the years discom losses and dues have routinely gone up and are brought in control temporarily by way of other central government-sponsored grants. Which formally routes national taxpayers money for rescue purposes in varied proportions for state ratepayers’ benefit.

In July 2021 the Ministry of Power unveiled yet another plan named the Revamped Distribution Sector Scheme (RDSS). It is a “reforms-based and results-linked” scheme with ambitious goals of bringing downAT&C loss at the pan-India level to 12-15 percent and a zero gap between average cost of supply and tariff.

One thing that is clear from the experience of the last two decades is that there are a variety of reasons plaguing the sector. And these reasons go beyond inefficiencies on the distribution side. In addition to tariff being lower than cost of supply, high AT&C losses including theft, poor procurement planning by discoms, there exists other causes for stress.

There are inefficiencies on the supply-side too, primarily in domestic coal exploration and transportation, overinvestment and under-utilized capacity, especially in transmission, which increases the wholesale cost that gets passed on to the discoms.

Some measures such as coal-linkage rationalization and coal swapping from inefficient to efficient plants have been introduced. But experts demand full blown supply-side reforms to cut down on the wholesale cost of power, an important parameter for discom revnue instability.

According to Dr. R Srikanth, Professor and Dean, National Institute of Advanced Studies, Bangalore: “The Central PSUs enjoy an exorbitant return on equity of 15.5% and enjoy the luxury of passing on the costs of their project delays via their tariffs. NTPC which has coal mines with an approved annual capacity of 56 Mt has produced only 14 Mt of coal in FY 2021-22 and MoP is passing mandates to enable NTPC to raise tariffs by importing coal at high rates to compensate for their failure in coal mining.”

“Further power purchase costs that account for about 75-80% of discoms’ annual expenditure are controlled by the central government through policies/directives of various ministries including that of power, coal, railways and finance,” he said.

Another measure that can bring much-needed efficiency gains is private participation in distribution. It is evident from the wide difference in AT&C loss levels of privately owned discoms versus state owned discoms. But opposition from state discom unions have largely meant that there is nil to limited political interest in backing a full-fledged privatization exercise.

Years of unchecked losses and inefficiencies coupled with band-aid solutions have resulted in heavy borrowing as a means of financing losses run up by various stakeholders. Companies in the generation and transmission sub-verticals too have been relying on short- and long-term loans to meet their operating expenses.

Total debt of the power sector currently stands at Rs 6.1 trillion, which is about 2.5% of the country’s gross domestic product. Power sector loans add up to 6.5% of the total gross non-performing assets of banks. There are real concerns of the sector jeopardizing India’s banks and thus, in turn, citizens’ savings. In December last year, the Power Ministry warned lenders to follow prudential checks before sanctioning any new loans to state discoms.

Discoms continue to post significant losses, even after decades of policy-level progress and bailouts. Given tariff hikes are politically contested, one may expect that the recent stress on imported coal shall further increase the divide between cost of production and revenue recovery. This will add up to the losses of discoms, making them further reliant on grants and bailouts.

“Hard and politically unpopular decisions are required to clear the discom conundrum. That could range from full privatization to a national power distribution company.” said Chatterjee.

A mistake repeated more than once, is a choice. Policymakers will have to decide whether they can keep repeating the past or is it time to choose big bold reforms to save the power sector and taxpayers’ money.