Third-party motor insurance premiums are going up from June; here are five things you should know

Insurers have been allowed to raise their third-party motor premium rates after two COVID-affected years. The hikes for car- and bike-owners are in the range of 0.1-20.7 percent.

After a two-year delay, third-party motor insurance premium rates are set to go up, starting this month. The Ministry of Road Transport and Highways and the Insurance Regulatory and Development Authority of India (IRDAI) released the final third-party liability premium rates last week.

From the insurers’ perspective, this was a much-needed revision. “It has been long-awaited, given the rise in inflation and significant increase in the award amounts granted by courts. The adequacy of the hike can however, be evaluated only after this year, since the last two years were not representative in terms of claims,” says Shanai Ghosh, CEO and Executive Director, Edelweiss General Insurance.

Here’s what you need to know about third-party motor insurance covers, the hike in premiums, and how the move will impact your pocket.

Third-party liability is the component of your motor insurance cover that is mandated by law ― no vehicle can ply on the roads without this cover. Put simply, it insures the policyholder against compensation that he/she might have to pay if the vehicle were to be involved in an accident, causing harm to another individual (third-party). The cover will also pay for any damages to the third-party’s property that your vehicle may have caused. The other component ― own damage ― takes care of expenses you might incur if your vehicle is damaged. However, you are not legally bound to purchase this cover. 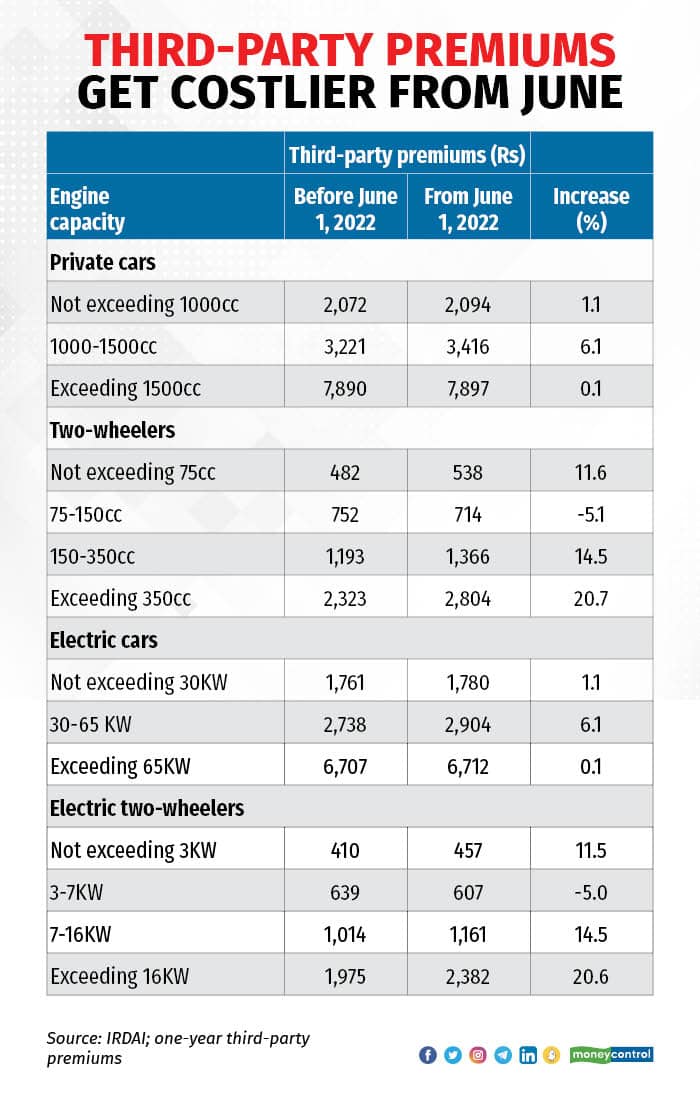 Usually, the IRDAI comes up with a proposed third-party rate structure every year in March, which is then finalised towards the end of the month. Final rates are typically lower than the proposed ones. This time round, the insurance regulator proposed hikes in March, but did not notify the final rates ― road transport ministry made the announcement instead, with revisions effective from June 1.

Also, the hikes have come through after two financial years ― they were last raised in financial year 2019-20. The COVID-19-induced lockdown towards the end of March 2020 meant that the annual third-party rate hike could not be effected. “Due to the COVID-19 lockdown, people stopped buying vehicles and existing vehicles were used. Increasing third-party premiums during such tough times would not have been viable. These hikes, post a COVID-19-induced gap, are more or less around expected lines,” Balchander Sekhar, Co-founder, RenewBuy, an online insurance aggregator, said.

Also read: Five insurance do’s and don’ts for your car this rainy season

Are the third-party premium hikes substantial?

Since third-party cover is mandatory, all vehicle owners are bound to feel the pinch, more so, the bike owners in all but one category. “It’s between 11-21 percent for two-wheeler owners. Over 20 percent qualifies as a significant rise, as they will be paying these premiums annually,” says Saroj Satapathy, Chief Operating Officer, JB Boda Insurance and Reinsurance Brokers. Only premiums for bikes with engine capacity of 75-150cc have, in fact, dropped by Rs 38. For car-owners, the increased premium burden will be less taxing, as hikes will be in the range of 0.1-6 percent. From the insurers’ perspective, this was a much-needed revision.

Electric vehicles (EVs) will see a rise of 0.1-20.6 percent in their third-party premiums. Again, it’s the two-wheeler space (barring the 3-7kW engine capacity segment) which will bear the maximum brunt in percentage terms. Hybrid EVs will be eligible for a 7.5 percent discount. “Discounts have been provided for hybrid electric vehicles this year. These are good measures that will help boost sales of these segments,” says Ghosh of Edelweiss.

Why it is important to buy own damage coverage

While buying the own damage component is not mandated by law, you need one to safeguard yourself against financial loss due to accidents and other risks such as natural calamities, fire and burglary. Two-wheeler owners, in particular, should not be tempted to let go of own damage cover due to hike in third-party premiums.

“Having proper insurance for all your assets is a sound financial approach. Own damage cover is meant to protect the value of the car or two-wheeler without denting your pocket due to repair or replacement charges after an accident, irrespective of third-party premium hike. These are two different kinds of risks and should not be traded off. In fact, third-party liability and own damage risks are linked and correlated, because an accident can trigger both. Therefore, take adequate cover for both kinds of risks,” says Srinath, Co-founder and Director, SANA Insurance Brokers.

Preeti Kulkarni is a financial journalist with over 13 years of experience. Based in Mumbai, she covers the personal finance beat for Moneycontrol. She focusses primarily on insurance, banking, taxation and financial planning
Tags: #insurance #Irdai #Motor #personal finance #third-party premiums
first published: Jun 3, 2022 10:16 am