Is the recent outperformance of large-cap funds a flash in the pan?

Most mid and small-cap funds outperformed their benchmarks in 2020, but only a few large-cap schemes beat the standard indices

Active management of mutual funds, especially in the large-cap category, lost considerable sheen with schemes underperforming benchmarks in recent years. But the market rally from March 2020 seems have brought back some of fund managers’ mojo. An analysis of data sourced from ACE MF shows that 69 percent of the equity funds outperformed the Nifty 50 index in 2020 – up from just 11 percent in 2019 and one percent of the schemes in 2018.

However, when it comes to performing against their own benchmark indices, it has been a mixed bag. Nearly 48 percent (36 of 75) or less than half the equity schemes outperformed their respective benchmarks in 2020. 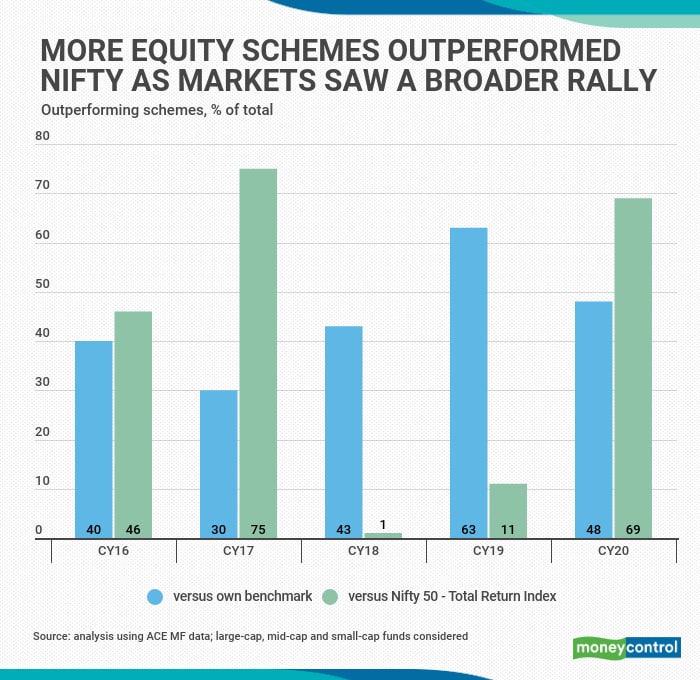 Only large, mid and small-cap schemes were considered for this analysis. The TRI or total return index (that includes dividends) levels of the benchmarks were taken, as per the new regulatory requirement.

Unlike previous years, when equity markets have been extremely polarised (with only a handful of Nifty stocks showing strong positive gains), the rally from March 2020 has been broad-based.

Mid-cap and small-cap funds, which invest from a wider universe of companies, saw sharper outperformance. In the case of mid-cap schemes, 60 percent of such funds gave higher returns than their respective benchmarks. Nearly 88 percent of these funds exceeded the returns given by the Nifty 50 TRI. Although the proportion of mid and small-cap schemes that outperformed their respective benchmark indices decreased in 2020 vis-à-vis 2019, most of these schemes had delivered negative returns.

Around 57 percent of the small-cap schemes gave higher returns than their respective benchmarks. At the same time, 95 percent of such schemes delivered returns in excess of the Nifty 50 TRI. Interestingly, large-cap schemes were not able to deliver sharp outperformance like mid-cap and small-cap schemes did in 2020. Only 31 percent of such schemes managed to give returns in excess of their benchmarks and only 34 percent delivered higher returns than the Nifty 50 TRI.

Fund managers attribute this lack of outperformance to technical reasons. “Due to single-stock limits, large-cap schemes were not able to increase their exposure to individual stocks, which had seen a sharp run-up in 2020 and their weightage in benchmarks increase,” says Sonam Udasi, fund manager at Tata MF.

For example, Reliance Industries (RIL) gained 29 percent in 2020, and its weightage in Nifty increased to as much as 14 percent during 2020. But, large-cap schemes were not able to take similar kind of exposure to RIL due to the 10 percent single-stock limit, stipulated by SEBI.

Udasi adds that large-cap schemes may have also been light on PSU stocks, which saw a sharp run-up in the latter half of CY20.

In the past, a few stocks have largely driven the gains in large-cap benchmark indices such as the Nifty 50. Unlike in the past, SEBI norms now require large-cap schemes to invest a minimum of 80 percent in large-cap stocks, and only have leeway in the balance 20 percent to pick mid-cap or small-cap firms. The large-cap stock investment universe is restricted to the top-100 companies by market capitalisation. Should you increase investments to active funds?

Vinay Paharia, chief investment officer of Union MF says, “Fund managers can sell stocks when they see prices going up. A passive fund will not."

A broader market recovery does help your equity fund, but large-cap funds are expected to continue finding it tougher to beat their benchmark indices. For large-cap exposure, investors should consider allocations to index and exchange-traded funds. For small and mid-cap investments, actively-managed funds still work.