Access insightful & curated financial content with Moneycontrol PRO at just Re. 1/- per day. Use code PRO365.
you are here: HomeNewsBusinessPersonal Finance

HDFC ERGO had first said that the policyholder was riding a 350cc bike, and denied the claim. But the insurer later paid out the claim and eliminated the exclusion from its product

Consider this: you use your bike to commute regularly and buy a personal accident policy to protect your family’s financial future in case of your death while riding the two-wheeler. Due to your love for bikes you own one with an engine capacity of 350cc. If you die in an accident, however, your family may not be eligible for the claim amount due to the higher engine capacity. Sounds absurd? No. That’s exactly what happened in a case that grabbed national headlines.

A Ludhiana-based policyholder died in an accident last year. Twitter user Rajiv Mehta’s post on private general insurer HDFC ERGO denying the accidental death claim made by family members on the grounds that the person was riding a bike of more than 150cc capacity went viral recently. 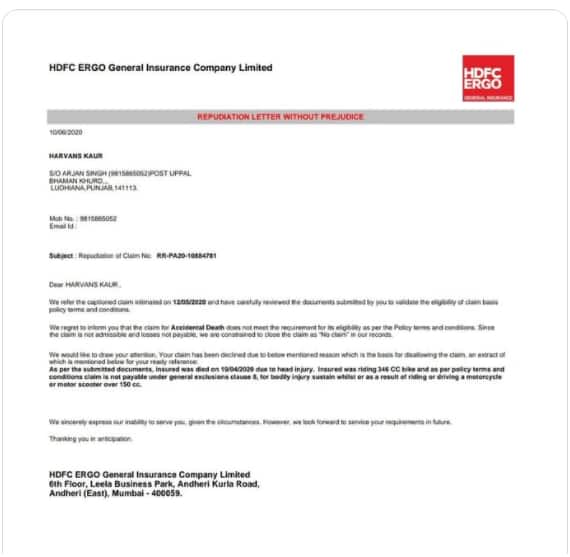 “Insured was riding 346cc bike and as per policy terms and conditions, the claim is not payable under general exclusions clause 8 for bodily injury sustained whilst or as a result of riding or driving a motorcycle or motor scooter of over 150cc,” the claim rejection letter, which Mehta tweeted out, said.

The company, on its part, says that the clause formed part of its older policies and was removed in October 2020. Also, the claim was paid to the family eventually.

"The specific case being highlighted in social media is an old case and in fact the claim is already paid to the customer. We would like to clarify that the particular exclusion which existed in all of our old products was removed in October 2020. We would also like to assure our existing and new customers that our PA (Personal Accident) policy covers all motorcycles regardless of their engine capacity (CC). We take pride in our industry-best claim settlement ratio and for the highest number of claims settled in the industry. We continue to strive to maintain this benchmark and evolve continuously to match customer needs and market changes,” an HDFC ERGO spokesperson told Moneycontrol.

Are fast bikes an Achilles’ heel for insurance?

Independent insurance experts believe this is a legacy clause – relic of the times when bikes of over 150cc were used for racing or recreational purposes, and not regular commuting. “Some policies had this clause 10-15 years ago. But policies have to evolve with time, as today such bikes are used for regular commute too. It is a case of flawed drafting of the clause,” says Hari Radhakrishnan, Regional Director, First Policy Insurance Brokers.

While the insurer says it has eliminated the controversial clause now, existing policyholders need to be vigilant. “Given that this product was discontinued only for new business in October 2020, it is unclear how many still hold outdated policies today. Customers holding an accident cover in any form should review their policy documents with their financial advisor and request for migration to a newer product at the time of renewal,” says Mahavir Chopra, Founder, Beshak.org.

On your part, you should go through the wordings carefully once you receive the policy and return it if you do not think it suits your requirements. “Our website enlists all the product features and policy wordings, which and are made available online, too, through various digital platforms. In fact, health (and PA) policies come with a free look-in period of 15 days so that the customers get sufficient time to go through all the details and in case they are not happy, they can get a full refund,” says the HDFC spokesperson.

Preeti Kulkarni is a financial journalist with over 13 years of experience. Based in Mumbai, she covers the personal finance beat for Moneycontrol. She focusses primarily on insurance, banking, taxation and financial planning
Tags: #insurance #Motor Insurance
first published: Oct 22, 2021 10:01 am