Lower PF contribution of 10 percent is not mandatory, EPFO clarifies

Comfortable with your liquidity situation? Opt for higher EPF contribution

You and your employer have the choice of continuing to contribute 12 per cent of basic pay as provident fund contribution, instead of the temporarily-reduced minimum rate of 10 per cent for the months of May, June and July. This follows clarification from the Employees’ Provident Fund Organisation (EPFO). The pension funds body has clarified that employee, employer, or both can contribute at a higher rate as well. “In cases where  employer wants to continue deducting 12 per cent of employee’s basic pay as employee contribution to provident fund, employee agreement is recommended to be in line with the spirit of the relaxation being given by the government with the objective of increasing liquidity,” says Sonu Iyer, National Leader, People Advisory Services, EY. The employer will need your consent to continue deducting your share of PF contribution from your basic pay at the rate of 12 per cent.

No such agreement is required for deduction at the statutory rate. “If the employer wants to reduce the share of PF contribution to 10 per cent and deduct an equivalent amount from the employee’s basic pay as the latter’s contribution, no employee agreement is required as the deduction is being made at the applicable statutory rate of deduction as 12 per cent has been changed to 10 per cent in the scheme for May-July 2020 by virtue of the notification issued,” says Sonu Iyer, National Leader, People Advisory Services, EY.

The statutory PF contribution rate was reduced from 12 per cent to 10 per cent (of basic salary plus dearness allowance) by the central government for employees and employers. The purpose was to ensure better liquidity during the three months to tide over the novel Corona Virus Disease-induced nationwide lockdown and the ensuing economic crisis. For example, if your basic salary is Rs 50,000, your employer’s contribution will come down from Rs 6,000 to Rs 5,000. Likewise, Rs 5,000 will be deducted from your salary instead of Rs 6,000 in the regular course.  According to the finance ministry and EPFO, this move will benefit 4.3 crore employees, as also 6.5 lakh organisations. 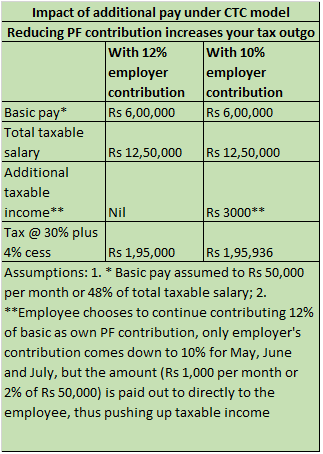 Experts believe you should continue contributing at 12 per cent, your cashflows permitting. “If the employee wants to voluntarily contribute at a rate higher than the statutory rate, she can do so. Employees can make a request to their employers to deduct a higher amount. Most employers facilitate this higher contribution, termed voluntary provident fund, through the year. It is better to continue with 12 per cent contribution if you can afford it, as it makes you eligible for higher tax benefits and higher retirals,” says Saraswathi Kasturirangan, Partner, Deloitte India.

A two-percentage point lower contribution is unlikely to make a significant difference to employees, particularly those who have not faced a pay cut. It does, however, mean substantial savings for employers since they do not have to restore this amount in the future. “Employees should continue to contribute to their PF at 12 per cent. While the marginally lower contribution over three months is unlikely to make a difference for most, for those who have just started out and have 30 years or more to go before they retire, even the four-percentage drop could make some dent

A two-percentage point lower contribution is unlikely to make a significant difference to employees, particularly those who have not faced a pay cut. It does, however, mean substantial savings for employers since they do not have to restore this amount in the future. “Employees should continue to contribute to their PF at 12 per cent. While the marginally lower contribution over three months is unlikely to make a difference for most, for those who have just started out and have 30 years or more to go before they retire, even the four-percentage drop could make some dent,” says Amol Joshi, Founder, PlanRupee Investment Services. The employer’s contribution to employees’ pension scheme (EPS) – 8.33 per cent of basic, subject to maximum pensionable salary of Rs 15,000 – will remain unchanged.

When employers’ contribution is part of CTC

If the employers’ contribution is part of your cost-to-company (CTC) package and your organisation opts for the reduced rate, it will have to make good the shortfall. “In the CTC model, if Rs 10,000 is the monthly EPF wage, the employee gets Rs 200 more directly from the employer as the employer’s EPF/EPS contribution is reduced and Rs 200 less is deducted from his/her wages,” the EPFO said. This clarification, however, raises a question mark on benefits for such employers as their outgo will remain the same. Some would want to continue with the existing framework. “In case of a CTC model, given the tax benefits available to both the employer and employee, employers would want to continue with 12 per cent PF contribution instead of crediting higher salaries to employees,” says Kris Lakshmikanth, Founder of executive search firm HeadHunters India. Check with your employer on the approach it plans to adopt.

You will, however, have to account for a higher taxable salary in case the employer transfers the equivalent amount to you under some other head. “The increased tax liability will be minimal, but you can look at maximising various tax-saver avenues available to mitigate the impact,” says chartered accountant Vaibhav Sankla, Co-founder, Billion BaseCamp Family Office. If you were to choose the new tax regime, which does away with a slew of tax deductions and exemptions, lower own PF contribution will not result in any change, as you will not be claiming any tax breaks under the new regime.

If you have not submitted your proposed investment declaration that employers ask for in April or have not exhausted the Rs 1.5 lakh limit under section 80C, this higher in-hand salary due to lower own contribution could result in higher tax deduction. “However, we do not see any major tax impact as most employees do express their intent to exhaust this limit in their proposed investment declarations at the beginning of the financial year. Reduced PF contribution for three months is unlikely to result in any significant deviation from these declarations,” says Karan Batra, Founder, CharteredClub, a tax consultancy portal.

This is because, besides EPF contribution, many employees also claim deductions on children’s tuition fee, home loan principal repaid, term insurance premium paid and tax-saver investments like equity-linked saving schemes or insurance-cum-investment policies. In case you are likely to fall short, you must intimate the employer to eliminate scope for higher tax deduction during these three months. “Many companies provide options to update investment declarations. Make use of the facility to indicate other tax-savers you will utilise to plug the gap,” says Sankla. In any case, ensure that you keep this factor in mind and optimise all tax breaks by January when employers seek the final declarations.
Preeti Kulkarni
Tags: #EPF #EPFO
first published: May 28, 2020 06:10 pm