Consumer durable companies -- Crompton Greaves Consumer Electrical (CGCE) and V-Guard Industries -- reported a mixed set of financials in Q3 FY19. While topline growth was steady for both companies, their operating performance was weaker as margins were impacted by higher commodity prices and increase in selling and distribution expenditures. Despite a lacklustre quarterly performance, the companies continue to expand their distribution network and are gaining market across product categories.

Performance of the lighting & fixtures segment was subdued as revenue for the segment came in two percent lower. Price erosion in the LED business and absence of Energy Efficiency Services (EESL) orders from municipality and government entities impacted topline. Margin continued to remain under pressure YoY, but showed some improvement on a sequential basis.

The company continues to focus on driving profitability through new product launches and rationalisation of its cost structure. The increase in employee expenses (up three percent) and other operating expenses (up four percent) was much lower in comparison to sales growth.

The growth in topline was broad-based in term of geographies. While the non-south market grew 18 percent YoY, the southern markets (V-Guard’s core operating region) showed signs of a recovery in Q3 and grew much faster at nine percent in comparison to previous quarters (four percent each in Q1 and Q2).

The management expects margin to recover in Q4 as the effect of December price hike (2-4 percent across product categories) will be realised in the current quarter. Overall, V-Guard is targeting topline growth of 15 percent through expansion of its distribution network (addition of 3,000 retailers every year). New product launches will push near term advertising and promotion costs higher but the same is anticipated to be around 4-4.5 percent of sales in the medium to long run.

Outlook and recommendationThe consumer durables market is still at a nascent stage, with pan-India electrification, change in lifestyle and rising income levels fuelling growth. The sector is gaining traction and competitive intensity has increased with the entry of newer players (Jaguar Lighting, Voltas Beko) in recent months. The portfolio expansion by existing players (wires and cables by Syska, LED lighting by Indiabulls, geysers by CERA Sanitaryware) has further crowded the market. 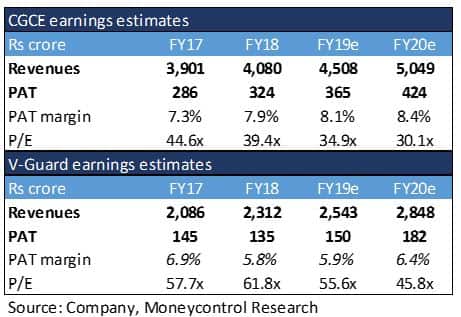 From a business perspective, both CGCE and V-Guard have a strong product portfolio and remain well positioned to capture demand despite a change in market dynamics.

From a valuation standpoint, V-Guard seems priced to perfection at more than 45 times FY20 estimated earnings. In contrast, CGCE trades at a significant discount to the former and offers a favourable risk-reward ratio on a relative basis. The company has been focusing on product innovation, diversification and premiumisation and has been able to gain market share across segments and products (especially fans). We, therefore, advise long-term investors to make use of any dips in the stock price to gradually build positions in CGCE.

Also Read: How to identify long term winners in the consumer durables space?