What should investors do with Adani Green, Sharda Cropchem, Bharat Dynamics and GNFC, which rallied the most in 2022 so far?

"From an investor point of view, one can buy in small tranche of Sharda Cropchem at current levels and another tranche at Rs 660 for an expected upside till Rs 780 and plausible support is seen at Rs 640."

The market is almost flat so far in current calendar year with the Nifty50 rising seven-tenth of a percent, against more than 24 percent jump seen in previous year. Elevated commodity prices due to supply concerns, margin pressure in corporate earnings, Ukraine-Russia crisis, heavy FII outflow, and expected 6-7 rate hikes by Fed this year weighed on the market.

The broader markets have also seen similar kind of performance with the Nifty Midcap 100 rising more than a percent and Smallcap 100 index falling nearly 5 percent in 2022.

Stocks have been in action in 2022 so far include renewable energy company Adani Green Energy, the biggest gainer in Nifty 500 index, rising 110 percent to Rs 2,864 apiece. Agrochemical company Sharda Cropchem, which has rallied  96 percent so far to hit Rs 695 per share, is the second largest gainer.

Gujarat Narmada Valley Fertilizers & Chemicals, adding about 96 percent to Rs 865 apiece and defence company Bharat Dynamics, rising about 89 percent to  Rs 736.70 per share, have been the third and fourth largest Nifty 500 gainers so far this year.

Here's what Jigar S Patel of Anand Rathi Shares & Stock Brokers recommends investors should do with these stocks that rallied more than 90 percent in 2022:

Although the counter looks lucrative, it is trading near extreme harmonic ratio of 1.618 & 1.9. GNFC is way above flattish 200-weekly moving average, which indicates that GNFC can see profit booking at any time.

Last but not the least, higher volume at extreme price levels are a sign of exhaustion. So from investors' perspective, avoid fresh buying in this counter.

Since last two trading sessions Adani Green Energy have made couple of Doji candlestick pattern, which states that counter is in state of indecision. Apart from Doji structures, MACD (moving average convergence divergence) has shown high pace momentum which indicates that counter can go sideways to down in coming days.

From Ichimoku cloud point of view price action is way far from tenkan sen (conversion line) and kijun sen (Base line) which means that price can test either of them in coming days. One should just wait and watch as of now. At current juncture, Bharat dynamics is trading near extreme harmonic ratio of 2.618 along with that stock has completed its N wave formation. The counter is way above flattish 200-daily moving average, which indicates that counter can see profit booking at any time.

Having said that, higher volume at extreme price levels are a sign of exhaustion. So from investors' perspective, avoid fresh buying in this counter. 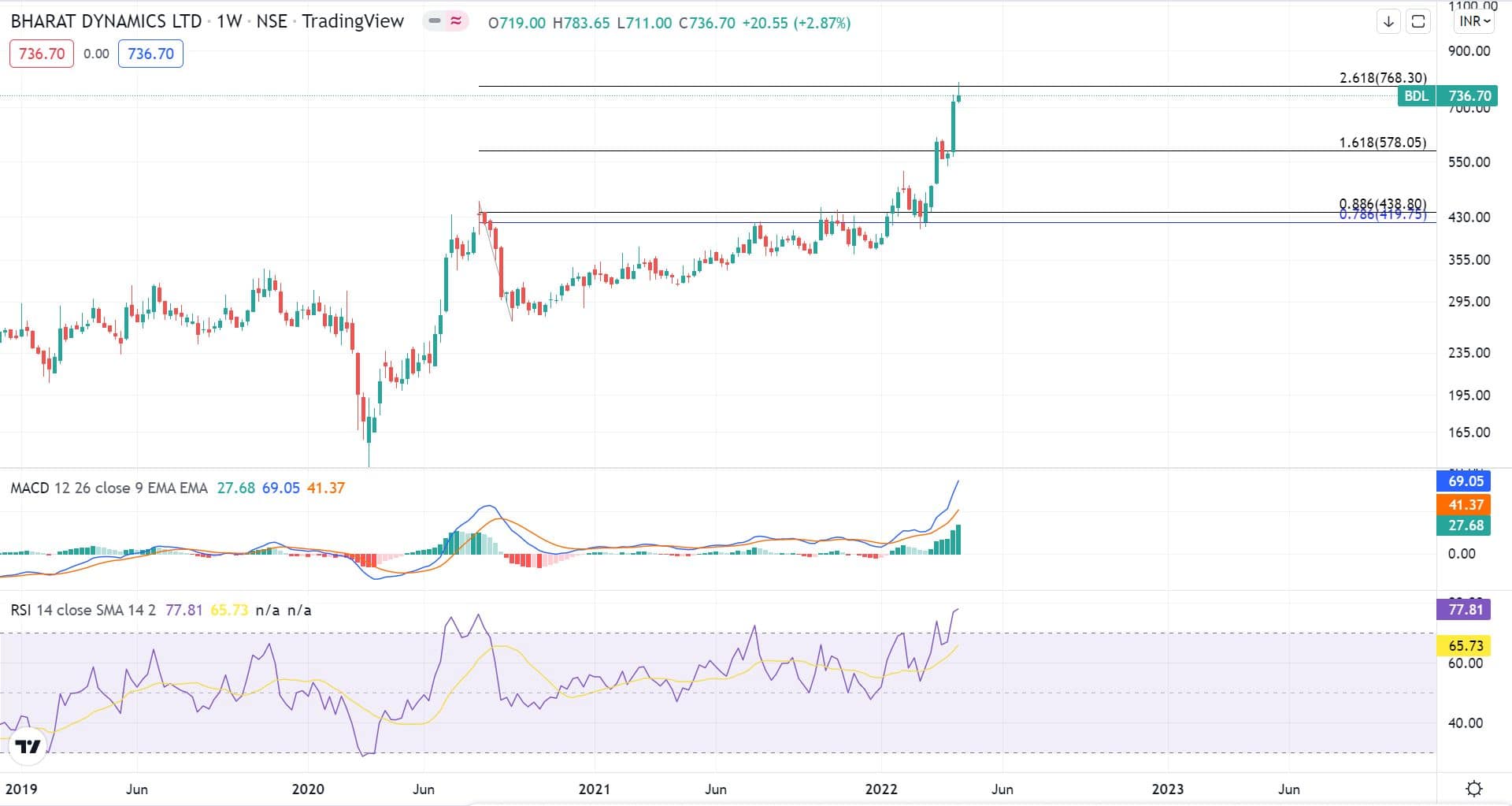 The counter successfully closed above its previous top of Rs 673 (made on February 7). At the current juncture, the stock is in the process of completing its bat action magnet movement, which was from B point (refer chart) and is expected to reach D point.

From an investor point of view, one can buy in small tranche at current levels and another tranche at Rs 660 for an expected upside till Rs 780 and plausible support is seen at Rs 640.

Disclaimer: The views and investment tips expressed by investment experts on Moneycontrol.com are their own and not those of the website or its management. Moneycontrol.com advises users to check with certified experts before taking any investment decisions.
Sunil Shankar Matkar
Tags: #Adani Green Energy #Bharat Dynamics #Gujarat Narmada Valley Fertilizers & Chemicals #Market Edge #Sharda Cropchem #Stocks Views #Technicals
first published: Apr 14, 2022 08:04 am