The equity market continued to reel under selling pressure for the second consecutive session on June 1 with the Nifty50 falling 62 points to 16,523 and the BSE Sensex declining 185 points to 55,381, dragged by technology, pharma, and FMCG stocks.

The market also remained volatile for the second straight session with India VIX rising 1.79 percent to 20.85 levels, indicating the discomfort for bulls going ahead.

"A small negative candle was formed on the daily chart with upper and lower shadows. Technically, this pattern indicates a formation of a high wave type candle pattern, which displays high volatility in the market," Nagaraj Shetti, Technical Research Analyst at HDFC Securities said.

He further said normally, such high wave formations after a reasonable upmove or down moves act as an impending trend reversal. But, having formed this pattern within a range movement, the predictive value of this pattern could be less, Shetti added.

He feels the near-term uptrend of the Nifty remains intact and present consolidation or minor weakness could be considered as a buy-on dips opportunity for the short term.

The market could shift into another 1 or 2 sessions of range move or minor weakness, before showing a sharp upside bounce from the lows, the market expert said, adding the near-term upside target remains intact at 16,800 levels.

Maximum Call open interest of 22.54 lakh contracts was seen at 17,000 strike, which will act as a crucial resistance level in the June series.

Maximum Put open interest of 36.94 lakh contracts was seen at 16,000 strike, which will act as a crucial support level in the June series.

A high delivery percentage suggests that investors are showing interest in these stocks. The highest delivery was seen in Bata India, ICICI Lombard General Insurance Company, Power Grid Corporation of India, PFC, and HDFC Life Insurance Company, among others. 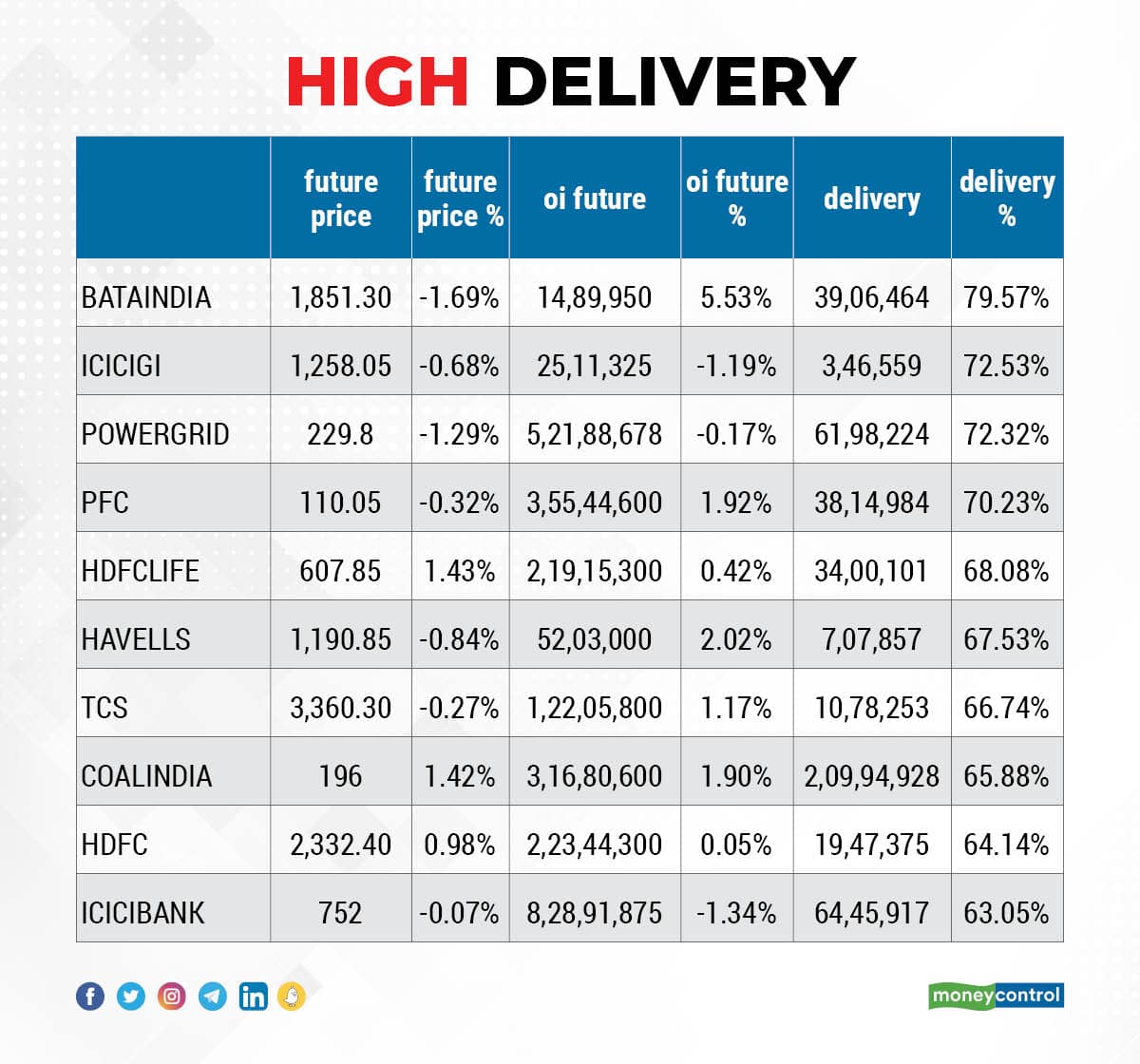 An increase in open interest, along with an increase in price, mostly indicates a build-up of long positions. Based on the open interest future percentage, here are the top 10 stocks including Nifty Financial, Coromandel International, Voltas, Ashok Leyland, and Gujarat Gas, in which a long build-up was seen. A decline in open interest, along with a decrease in price, mostly indicates a long unwinding. Based on the open interest future percentage, here are the top 10 stocks including Persistent Systems, L&T Infotech, Intellect Design Arena, Coforge, and Escorts, in which long unwinding was seen. 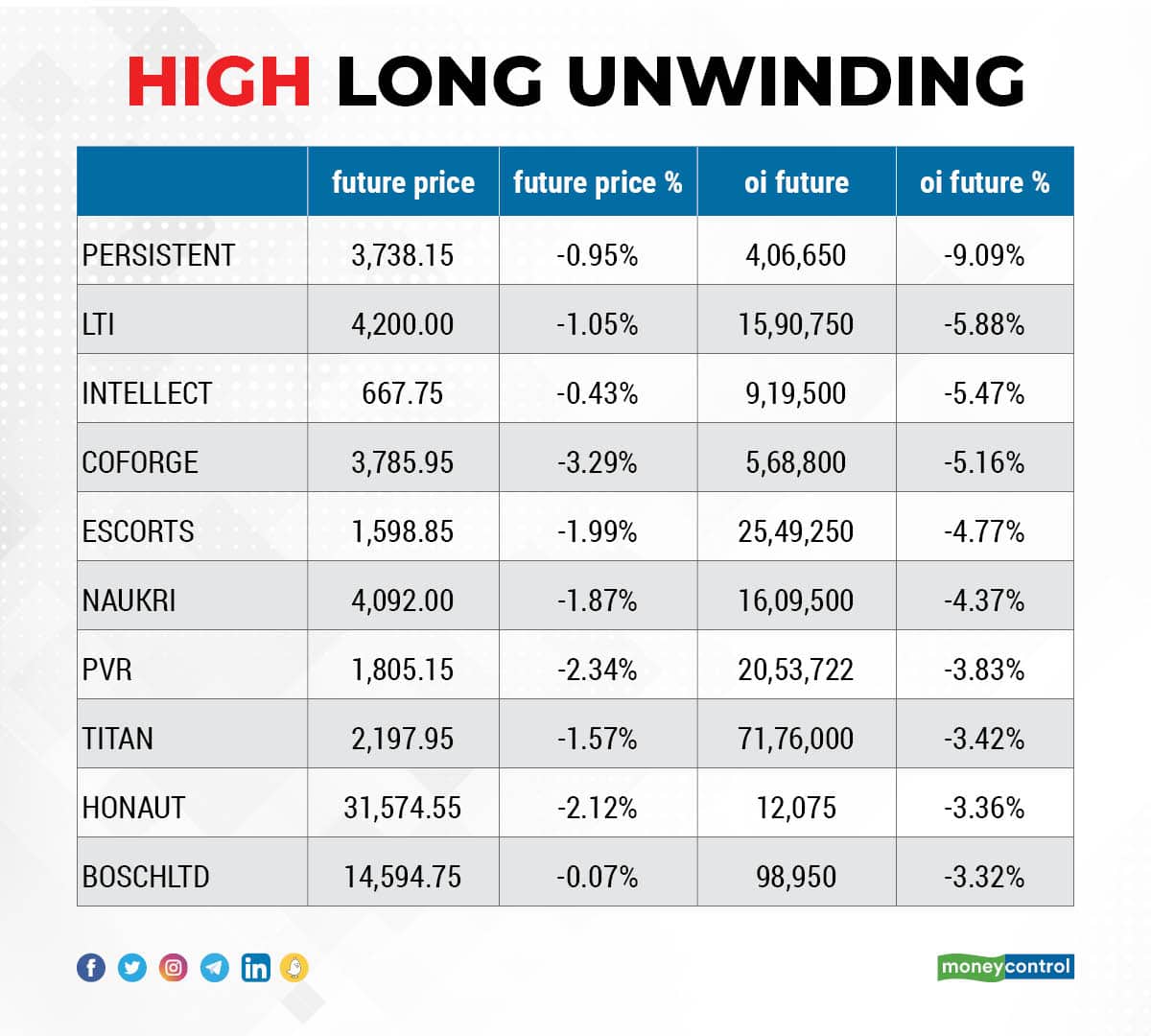 An increase in open interest, along with a decrease in price, mostly indicates a build-up of short positions. Based on the open interest future percentage, here are the top 10 stocks including Bajaj Auto, Delta Corp, Aarti Industries, Oberoi Realty, and Gujarat State Petronet, in which a short build-up was seen. 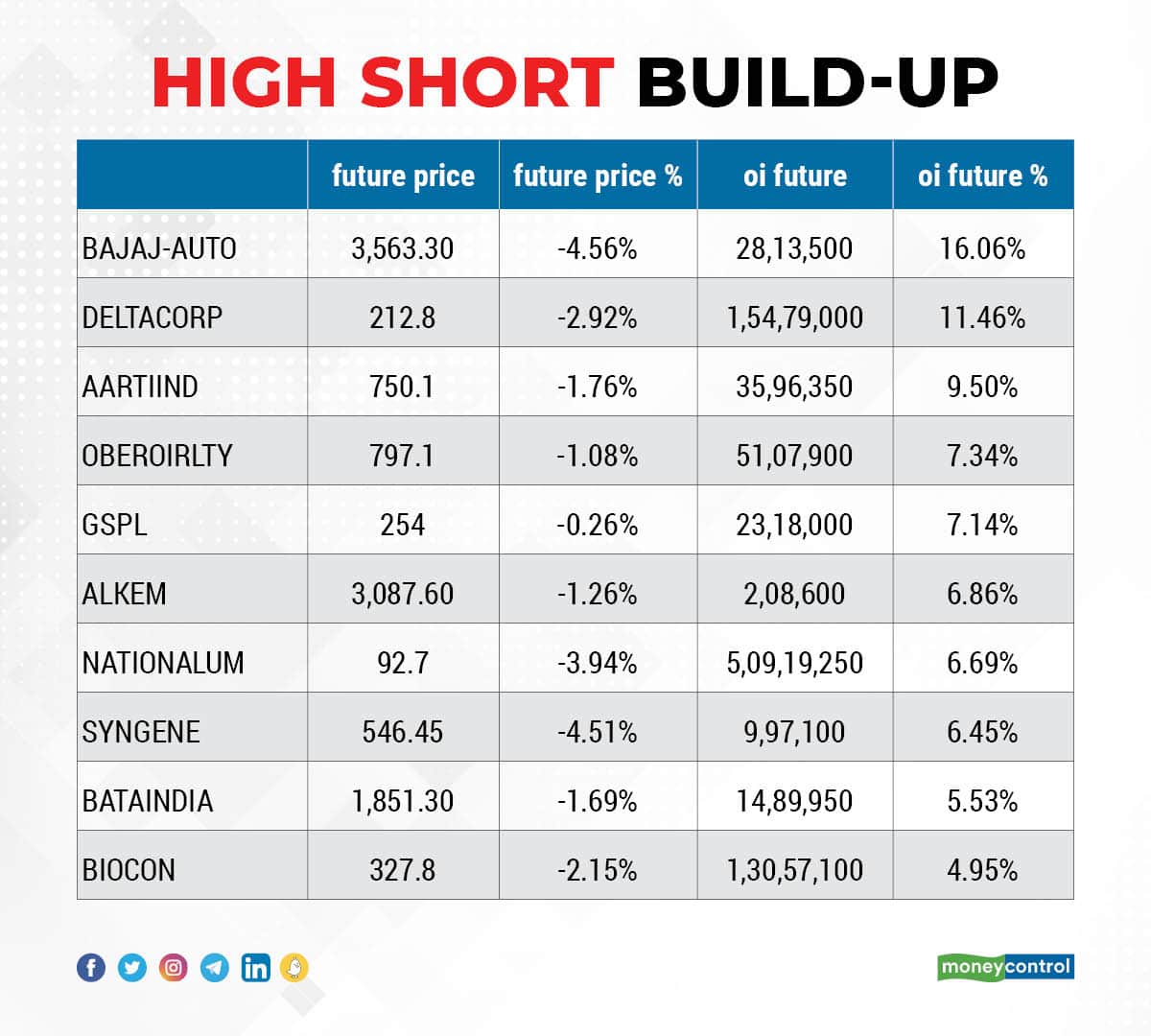 A decrease in open interest, along with an increase in price, mostly indicates a short-covering. Based on the open interest future percentage, here are the top 10 stocks including ICICI Prudential Life Insurance, Bank Nifty, Polycab India, Crompton Greaves Consumer Electricals, and GAIL India, in which short-covering was seen. Bata India: Promoter Bata (BN) B V offloaded 36 lakh equity shares in the company via open market transactions at an average price of Rs 1,860 per share. 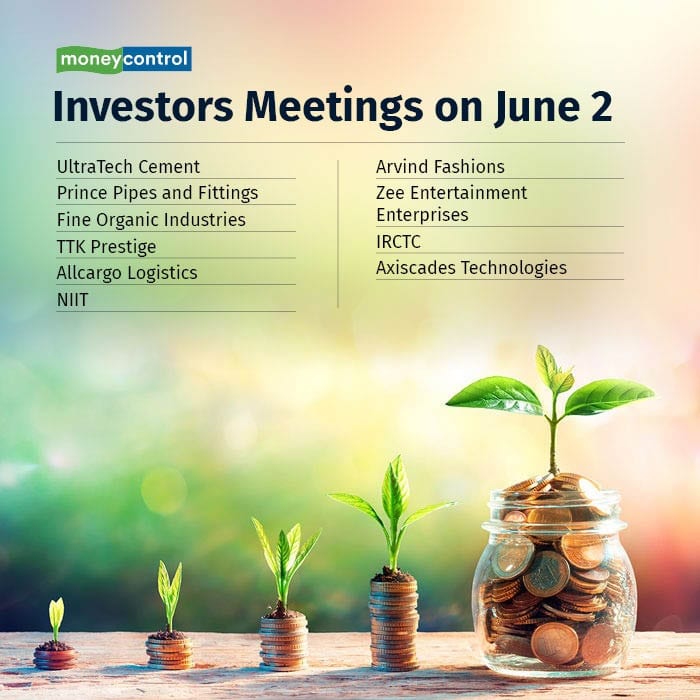 Delta Corp: Subsidiary Delta Pleasure Cruise Company has commenced management of operations of the casino at the hotel "The Zuri White Sands Goa, Resort and Casino", situated at Pedda Varca Salcete, Goa. With the commencement of operations of this casino by DPCCPL (subsidiary), the company and its subsidiaries now operate five casinos in Goa.

Butterfly Gandhimathi Appliances: CRISIL has upgraded its long term rating on the company to 'AA' from 'A-', and short term rating to 'A1+' from 'A2+'.

Eicher Motors: The company sold 63,643 units of Royal Enfield in May 2022, registering a growth of 133 percent compared to 27,294 units sold in same month last year. In year-ago month, several states had imposed lockdowns to control the spread of Covid virus. Eicher exported 10,118 units in May 2022, up by 40 percent over 7,221 units sold in corresponding month last year.

Mold-Tek Packaging: Ashish R Kacholia & PAC (Himalaya Finance and Investment Company) sold 2.25 percent equity stake in the company via open market transactions on May 31. With this, their shareholding in the company stands reduced to 4.55 percent, down from 6.8 percent earlier.

Knowledge Marine & Engineering Works: The company has received a contract from Dredging Corporation of India, for 'capital dredging at Mangrol Fishing Harbour Phase III Part B', for a tenure of 12 months. The project cost is Rs 67.85 crore.

Mishtann Foods: Mishtann Foods has seen good response for Mishtann Pink Rock Salt and has bagged orders from major retail stores for 1700 metric tonnes. The supply of these orders will commence from July 2022. 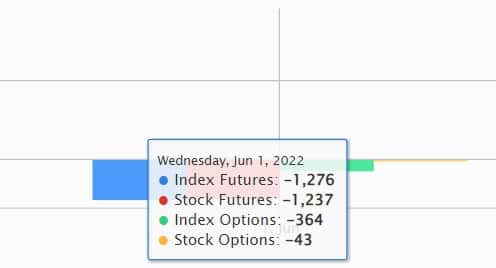 The National Stock Exchange has not put any stock under its F&O ban segment for June 2. Securities in the ban period under the F&O segment include companies in which the security has crossed 95 percent of the market-wide position limit.

Disclaimer: The views and investment tips expressed by investment experts on Moneycontrol.com are their own and not those of the website or its management. Moneycontrol.com advises users to check with certified experts before taking any investment decisions.
Sunil Shankar Matkar
Tags: #Market Cues #Market Edge #Nifty #Sensex #Trade Setup #video
first published: Jun 1, 2022 09:43 pm