Shabbir Kayyumi of Narnolia Financial Advisors said as long as Nifty sustains above bullish unfilled gap formed around 11,445-11,455, one can trade with buy on dip strategy

The stock market started April series on a positive note on March 29, after a stellar run in the month during which benchmark indices rallied more than 7 percent.

For the week, the Nifty50 rallied 1.4 percent, forming bullish candle on weekly charts and is 2 percent away from its record high of 11,760 touched in August 2018.

He said index trading above 11,640 will accelerate the upmove taking it higher towards the target of cup and handle pattern formed on a lower time frame which comes to 11,740.

Also, as long as Nifty sustains above bullish unfilled gap formed around 11,445-11,455, one can trade with buy on dip strategy, he advised.

Nagaraj Shetti, Technical Research Analyst at HDFC Securities said having placed at key overhead resistance of 11,650-11,750, there is a possibility of intermittent downward correction for the next one or two weeks, which is unlikely to damage the uptrend status of the market.

Maximum Call open interest (OI) of 22.67 lakh contracts was seen at the 12,000 strike price. This will act as a crucial resistance level for the April series.

Maximum Put open interest of 21.33 lakh contracts was seen at 11,500 strike price. This will act as a crucial support level for April series. 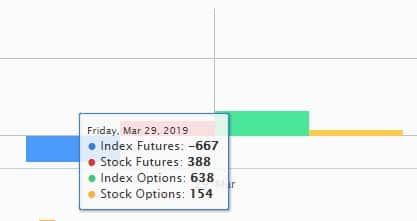 Dishman Carbogen Amcis: Management meet and plant visit at company's Bavla plant with certain institutional investors and analysts has been scheduled on April 1.

Atul Ltd: Board to consider FY19 results & Dividend on April 26.

PI Industries: Company will announce its Standalone and Consolidated audited financial results for the financial year ended March 31, 2019 and recommend final dividend, if any on April 17.

MCX India: Board approved the appointment of PS Reddy as MD & CEO of the company.

Lyka Labs: Company entered into One Time Settlement agreement with the Bank of Maharashtra and arranged to make an upfront payment of Rs 11 crore as settlement amount and Rs 6.49 lakh as processing fees to the bank.

Scanpoint Geomatics: Company in consortium with Team Computers Private Limited (lead bidder) received a contract for setting up of enterprise Geoportal for National Atlas and Thematic Mapping Organisation (NATMO), Kolkata. The aggregate value of project for SGL is Rs 2.08 crore.

Sayaji Industries: Board has authorised Priyam B Mehta, Varun P Mehta and Vishal P Mehta individually and jointly to enter into a Joint Venture Agreement with Societe Developpement Produits Afrique - SDPA, France, the holding company of Alland and Robert for manufacturing of gum arabic/ gum acacia, gum ghatti and gum blends. The joint venture will be a 50:50.

Rico Auto Industries: Company alongwith its step down subsidiary, Rasa Autocom Limited has completed the acquisition of 2,11,20,000 equity shares of Magna Rico Powertrain Private Limited from Magna Powertrain GMBH at the rate of Rs 4.05 per share for a total consideration of Rs 8.56 crore.

Jindal Drilling: Company has acquired an offshore jack up drilling rig from Discovery Drilling Pte Ltd, Singapore, a joint venture of the company. The rig would be soon deployed under contract with Oil and Natural Gas Corporation (ONGC) already awarded to the company.