After some profit-booking in the past week, stocks are likely to be rangebound in the week ahead, analysts said.

The stock markets took a breather after profit-booking in the week ended October 1. Selling pressure in four of the five sessions dragged the market down from record high of 17,947.65 in the first session of the week and the Nifty 50 finally lost 1.8 percent during the week. The index had advanced in each of the five preceding weeks.

The India VIX, a measure of volatility, spiked to 19.43 during the week, before settling at 17.2, up 1.7 percent during the week and also rising 18.5 percent in September.

Experts said the market is likely to be rangebound in the coming week, with resistance at near-record high levels and support at about 17,300.

“For the second half of September, we maintained a cautious stance on the market and it moved much more than we had expected,” said Sameet Chavan, chief analyst – technical and derivatives, at Angel Broking. “In such kind of strong bull run, it may not be a wise ploy to stay sceptical. But the kind of time-projections and negative divergence in momentum oscillators we are observing, we would continue with the same.”

He said the overstretched market can surprise any time and reiterated staying light in the market.

“We have already witnessed a glimpse of this possibility this week but structurally, nothing has been dented yet,” he said.

According to Chavan, the upside in the coming week may be capped.

The first sign of weakness would be when the lower range is broken, he said, adding that the India VIX had also spiked up and “volatility could remain on the higher side in the coming week as well.”

Here are 10 trading ideas by experts for the next 3-4 weeks. Returns are based on October 1 closing prices:

The stock is under positive convergence of long-term and short-term simple moving averages, indicating a strong trend. On the weekly and monthly charts, the stock is entering a volume and price breakout formation, which indicates further upside in the near term. 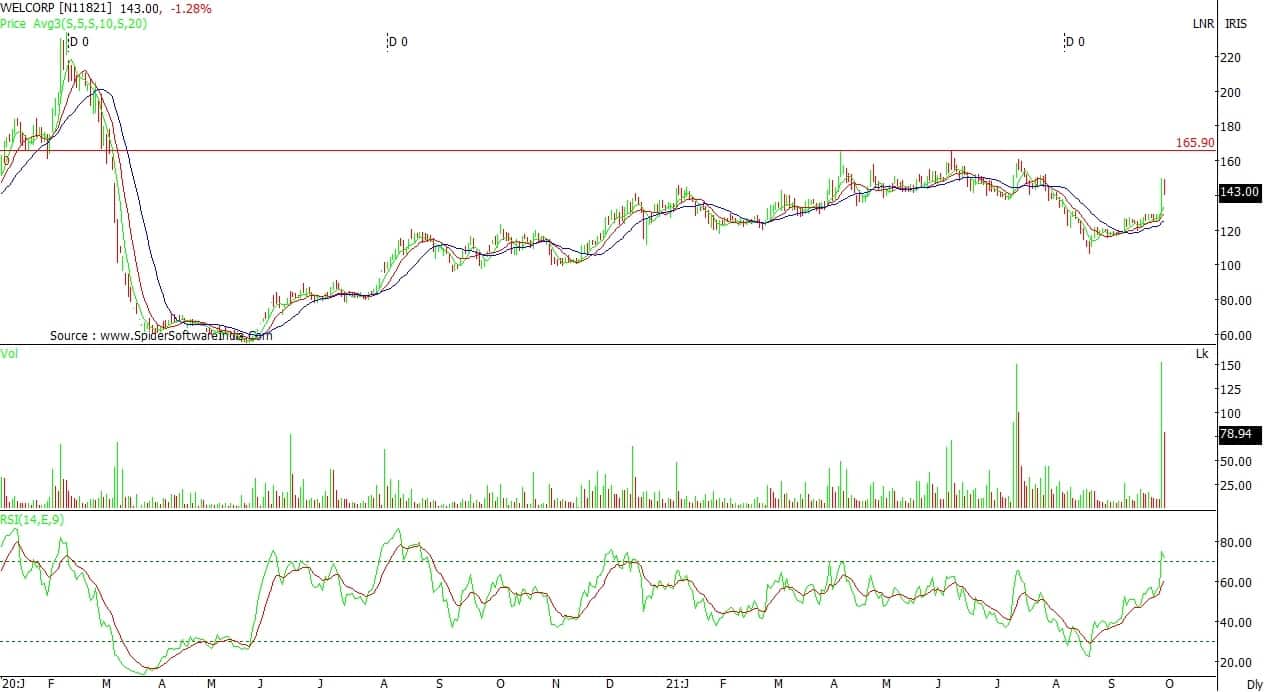 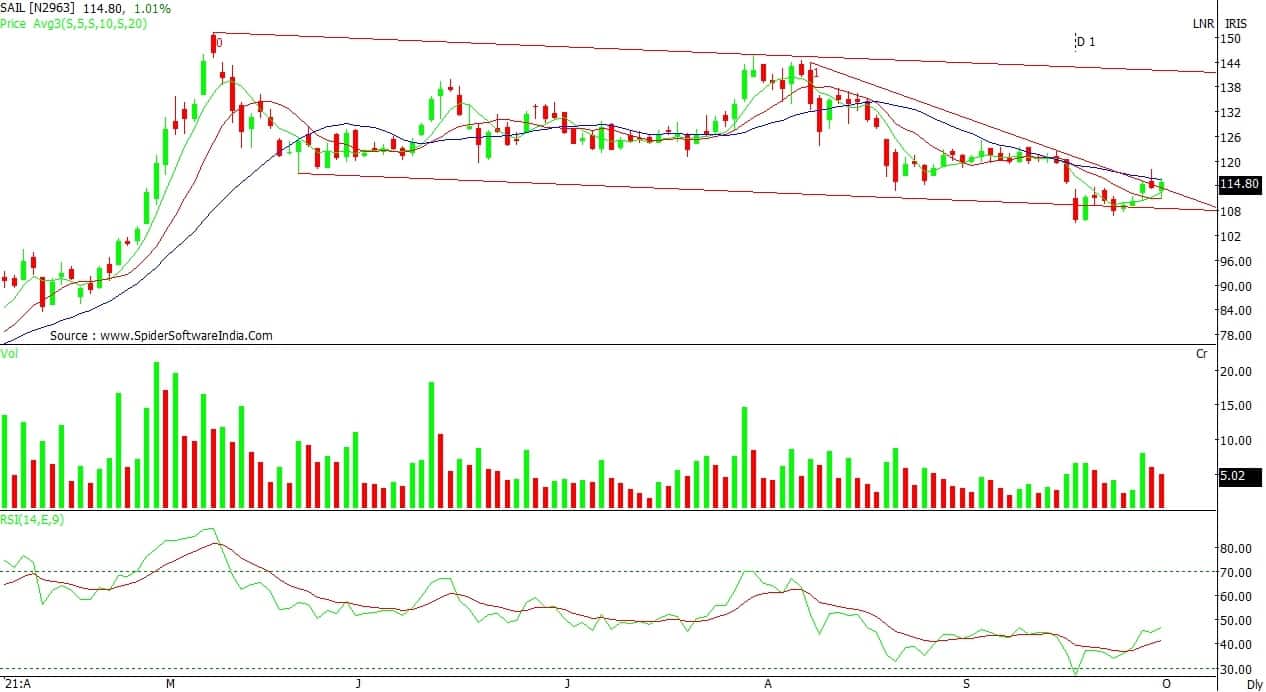 The stock completed a bullish consolidation formation by closing above Rs 172. It had spent seven months below Rs 172, forming an ascending triangle during this consolidation. The next hurdle is Rs 205. The stock price has broken out from the downward trendline on the weekly chart with higher volumes. Its primary trend is positive and it is trading above its all-important short term and medium-term moving averages. The stock is creating a bullish higher-top, higher-bottom formation on the weekly chart.

The directional indicator (DI) is placed above Minus DI while the average directional index (ADX) line is above 25 and headed upwards, indicating momentum in the uptrend. The daily relative strength index (RSI) has shown a trendline breakout, which is a bullish development for the short term. We recommend buying Maithan Alloys at CMP of Rs 1,156 for a target of Rs 1,300, keeping a stop-loss at Rs 1,070.

The stock has broken out from the downward trendline, adjoining the highs of July 20 and September 17. The price has broken out on the weekly line chart to close at the highest level since April 2015.

The DI is above Minus DI while the ADX line is placed above 25 and heading upwards, indicating momentum in the uptrend. The daily RSI has witnessed a trendline breakout, which bullish for the short term. We recommend buying Ingersoll rand at CMP of Rs 1,021 for a target of Rs 1,125, keeping a stop-loss at Rs 960.

The stock is forming a bullish higher-top, higher-bottom formation on the weekly chart. The primary trend is positive where it is trading above its 50-, 100- and 200-day exponential moving averages (EMA).

Accumulation has been seen during the past few months, where volumes are higher on up-days then down-days. Oscillators like RSI and money flow index are placed above 60 and rising upwards, indicating strength in the current uptrend. We recommend buying Polyplex at CMP of Rs 1,768 for a target of Rs 1,950, keeping a stop-loss at Rs 1,650.

The stock has been following an uptrend. There is a bullish sentiment in the stock. The moving average convergence/divergence (MACD) and RSI indicate that the momentum in the stock is likely to continue. ICICI Bank broke its all-time high recently. The stock has taken support at the 55-day EMA line. The stock has given the daily candle breakout near Rs 680 and made a high around Rs 717. After some retracement, getting support of the trendline and EMA line, the stock continues with a bullish sentiment.

Indicators like MACD and RSI show that momentum in the stock is likely to continue. We recommend a buy on ICICI Bank above Rs 696 with the target of Rs 780. Investors are advised to maintain a stop-loss of Rs 670. Since early August, this stock underwent a decent price-wise and timewise correction. Initially, the stock retraced 50 percent of its previous up-move and then slipped into consolidation. After cementing its position around this key retracement level, the stock finally managed to break out from its recent congestion phase.

With this, we can see prices traversing the key short-term 89-day EMA placed at Rs 245. Since the breakout took place on sizable volumes, we recommend buying for a short-term target of Rs 284. The stop-loss can be placed at Rs 241.