The momentum could get concentrated to fewer stocks and sectors and hence, traders need to be very selective in stock picking for trading, expert advises

Bulls retained their reign on Dalal Street for the third straight week ended August 5 and foiled attempts by bears to gain control. Consistent buying by FIIs, and falling oil prices supported the market to stay in the green despite volatility triggered by geopolitical tensions and RBI rate hike.

The Nifty50 rose 1.4 percent or 239 points during the week to close at 17,397, backed by buying in most sectors. The index has seen a Doji candle formation on the daily charts, which is generally indecisiveness among bulls and bears about future market trend, while the bullish candlestick pattern formation continued for yet another week.

The index faced a lot of resistance around 17,500 but failed to close above the same, which can continue to act as a resistance in the coming week, followed by 17,800, whereas the 17,150-17,200 can be a strong support area, followed by crucial support at 17,000. The market moved in a range with bulls holding the fort, though it seems to be in a overbought zone after rallying 14 percent in the last one-and-a-half months, experts said.

"The short-term trend for the Nifty still remains positive as there’s no confirmation of reversal yet. However, the momentum readings on the daily chart are in an overbought zone and hence one should be vigilant on important market levels in the current week," Ruchit Jain, Lead Research at 5paisa said.

He further said the support is placed at 17,160 which will be the important support now and hence all existing long positions should now be trailed with a stop-loss below this support.

Jain sees 17,500 as the immediate resistance and, if the index moves above that, it will result in a continuation of the uptrend and it can then move towards the 78.6 percent of the entire correction which is around 17,870, he said.

The momentum could get concentrated to fewer stocks and sectors and hence, traders need to be very selective in stock picking for trading, he advised.

Let's take a look at the top 10 trading ideas by experts for the next three-four weeks. Returns are based on the August 5 closing prices:

After a price-wise and time-wise-correction, the stock witnessed breakout from its short-term supply zone (placed at around Rs 570).

On August 5, the stock rose to 6-month high of Rs 587, where we have observed spike in volume and rise in future open interest, which signals that major market participants are in favour of the bulls.

The key technical indicators are positively poised on medium-term as well as short-term timeframe charts.

This could lead the stock towards Rs 620-640-680 in the short-term. In case of any decline, the stock will find support at around its 20-day EMA (exponential moving average), which is placed at around Rs 530.

Continuing its prior daily rising trend, the stock witnessed a breakout from the Bullish flag pattern and recorded a new high of Rs 4,554. The stock has also surpassed its prior highs connecting rising trendline convincingly with above average volume.

The key technical indicators are in favour of the bulls on major timeframe charts. The stock has potential to move towards its breakout points, which are placed at around Rs 4,980.

On the lower side, the stock will find support around intermediate point of polarity, which is placed at around Rs 4,170.

The stock oscillated in the narrow range post a price-wise-correction and poised for a fresh up-move. Its daily volume jumped to life-time-high and future open interest witnessed substantial rise, which signals that major market participants are favour of the bulls.

Also read - Reliance to hold its 44th AGM on August 29: All you need to know

Its daily RSI (relative strength index) gave buy signal post bullish divergence and currently, positively poised above 50-mark. We believe that undergoing positive momentum will continue, which could take the stock towards its 100-day and 200-day SMAs (simple moving average), which are place at Rs 132 and Rs 137, respectively.

In case of any decline, the stock will find support around its 52-week low, which is placed at Rs 99.

The weekly timeframe chart of Caplin Point Laboratories indicates sustainable upmove in this week, after a consolidation of last week.

Weekly 14 period RSI is placed at the edge of moving above 60 levels. This suggests further strengthening of upside momentum in the stock price ahead.

After showing a gradual upmove in the last few weeks, the stock price has shifted into a sharp upmove in last week. We observe an upside breakout of the hurdle of previous swing highs at Rs 110 levels in last week and closed higher.

The larger positive sequence like higher tops and bottoms is intact as per weekly timeframe chart. Volume has expanded on Friday during upside breakout and the weekly 14 period RSI shows positive indication.

After the recent pricewise correction, prices had consolidated in a range and had formed a ‘Symmetrical Triangle’ pattern. The stock has given a breakout from the consolidation thus indicating probability of a short term upmove.

The volumes on breakout were higher than the average and the ‘RSI’ oscillator is also indicating a positive momentum. 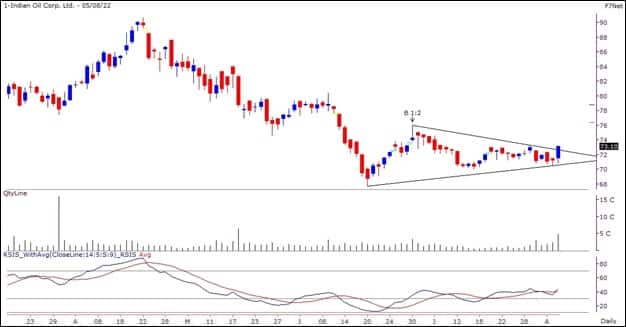 In last few months, the stock has formed a ‘Higher Top Higher Bottom’ formation and is this in an uptrend. In last couple of months, the price upmoves have been supported by good volumes and prices have no given a breakout from its resistance which indicates probability of a continuation of the uptrend in the short term.

The ‘RSI’ oscillator is also indicating a positive momentum and hence, we expect an outperformance from the counter in the short term.

Traders can look to buy stock around current market price of 181 and add on any declines towards the support of Rs 175. The stop-loss on long positions should be kept below its 20-day EMA (exponential moving average) which is at Rs 168 while the potential short targets are seen around Rs 189 followed by Rs 198. 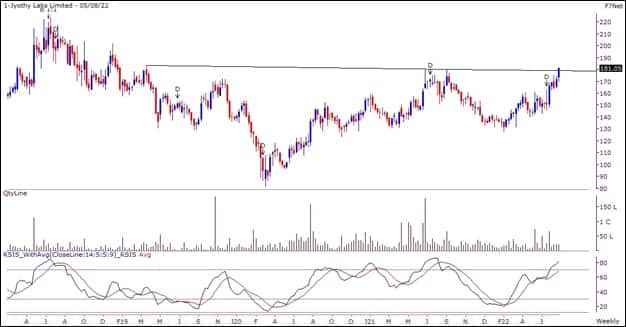 The stock hit an all-time high of 723.75 in the same month last year. Since then we have seen a gradual decline to Rs 440. However, in June 2022, when the market suffered a major decline, the stock made a double bottom at Rs 440 and quickly recovered.

Technically, it is a bullish pattern and we expect the stock to at least go above the 626 level to validate the formation. 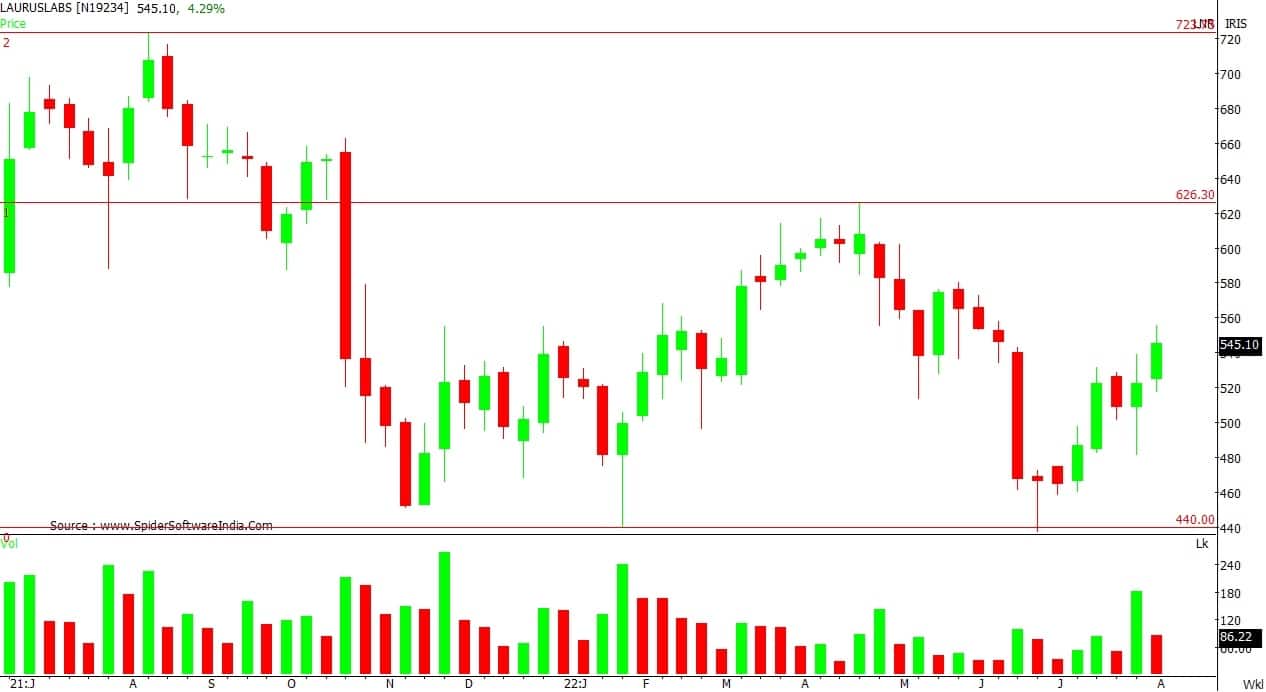 The stock is turning positive on the daily chart. In the month of July, the stock corrected to 50 percent of the entire rally, which was seen during the pandemic period.

If the Nifty IT index outperforms from here then it is a strong candidate for a rebound. The stock closed above last month's high, which would propel the stock to Rs 2,700 in the medium term. Buy more at current levels at Rs 2,300 with stop-loss at Rs 2,200. It is forming a round bottom on the daily chart. Major oscillators like RSI, MACD (moving average divergence and convergence) and DMI (directional movement index) are supporting this formation, which will help the stock to move higher.

It is a bullish consolidation that pushes the stock gradually upwards. The strategy should be to partially buy at the current level of Rs 740 and buy the remaining 50 percent around Rs 690-700. Place stop-loss at Rs 650. 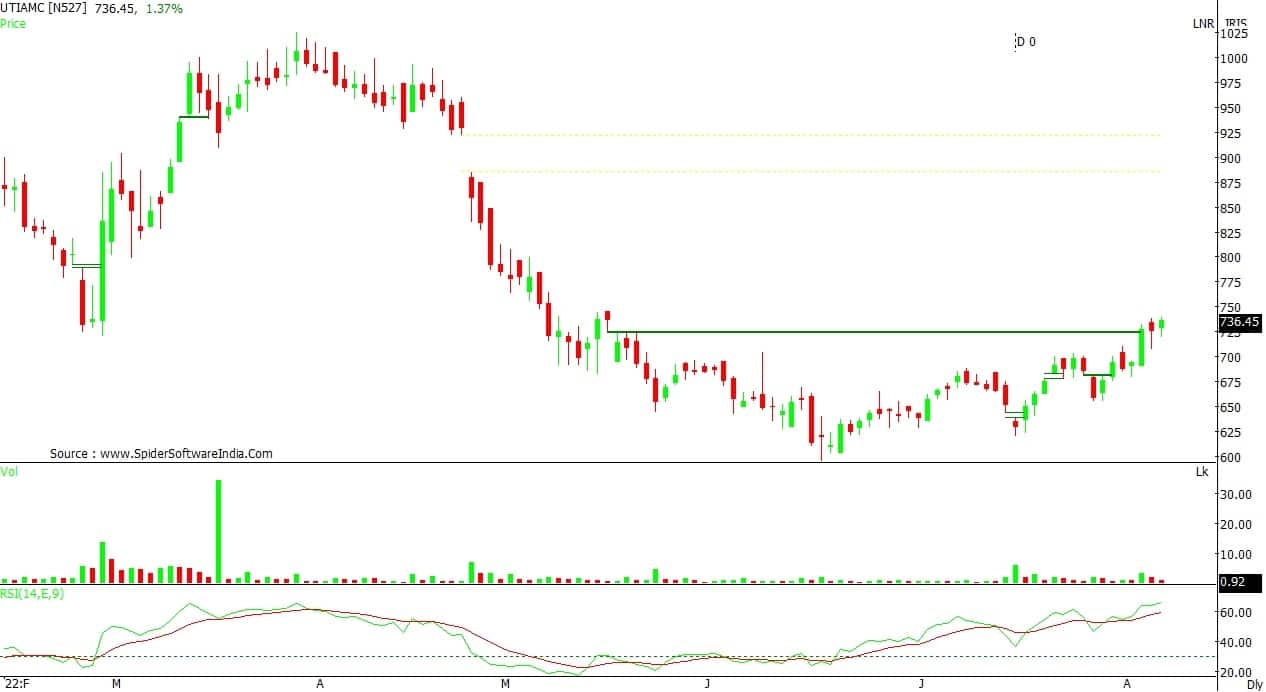