Prabhudas Lilladher suggests buying and accumulating the stock for an upside target of Rs 100-105, keeping the stop loss near 73 to achieve a decent return

National Aluminium Company Limited (Nalco), a central public sector enterprise (CPSE) under the Ministry of Mines, has rallied 94 percent in the year 2021 against an 18 percent rally in the Nifty50 during the same period.

Nalco is one of the largest integrated primary producers of aluminium in Asia. Its presence encompasses the entire value chain from bauxite mining, alumina refining, aluminium smelting, power generation to downstream products.

It has risen 137 percent in the last year compared to a 46 percent rally in the Nifty50 and a little more than 50 percent gain in the S&P BSE 500 index.

The stock has fallen more than 10 percent in August against a 5 percent rise in the Nifty but is showing signs of bullishness. Technically, Nalco has formed an ascending channel pattern on the daily chart, which has a bullish bias.

The next target for the stock is placed at Rs 100-105, which translates to an upside of nearly 20 percent from the August 13 closing price of Rs 83.75 on the BSE, say experts. 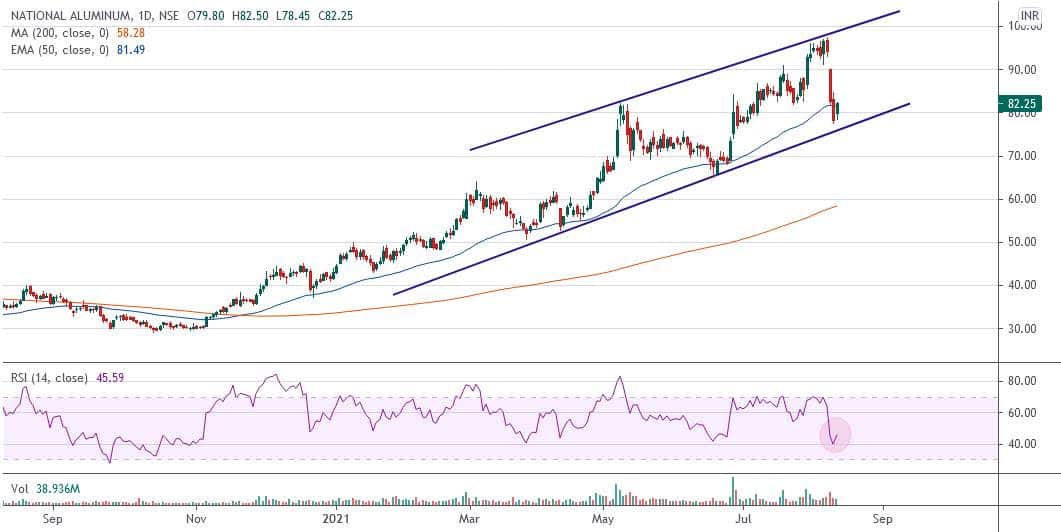 Technically, the stock was in a consolidation phase from March 2020 to November 2020 ranging from 28 to 39 but has since given a decisive breakout to produce a decent rally.

Channel patterns are formed with a combination of two lines that run parallel to each other. These two lines look like a channel when placed on the price chart.

In the study of technical analysis, the Channel falls under the category of continuation patterns and is one of the most reliable trends following pattern.

“Recently, the stock has corrected from the peak level of 97.45 and shown signs of bottoming out near 77 level of the lower trendline support zone and reversing with a positive candle pattern to improve the bias again. Currently, the stock has just moved past the significant 50EMA level of 81.50 to strengthen the view of a buy recommendation and can anticipate for further upward movement,” Parekh said.

The RSI indicator pointed towards a trend reversal to signal a buy and is well placed with potential and strength to rise further in the coming days.

“We suggest to buy and accumulate this stock for an upside target of 100-105 levels, keeping the stop loss near 73 for a time frame of around two-three months and achieve a decent return from the midcap counter,” Parekh said.